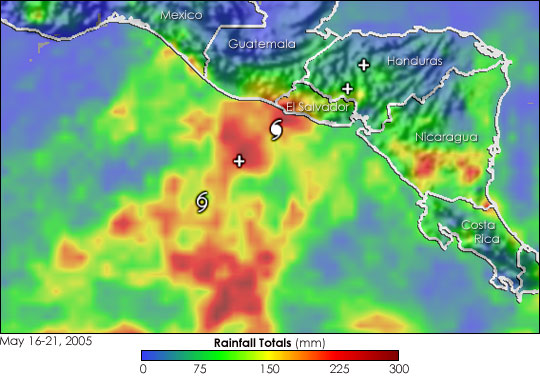 Adrian, the first tropical storm of the season in the eastern Pacific, became the first hurricane to hit El Salvador when it came ashore on Friday, May 19, 2005, between Acajutla and Puerto La Libertad west of San Salvador. Adrian was a minimal hurricane when it made landfall. The storm had winds of 120 kilometers per hour (75 mph) when it made landfall, but it quickly weakened and dissipated as it moved inland over central Honduras. This was the same region affected by Hurricane Mitch in 1998, when 10,000 people died in the devastation. Unlike Mitch, Adrian was responsible for just two deaths in Guatemala as a result of a mudslide.

The above image illustrates why Adrian had a smaller impact on Central America than initially feared. The image shows rainfall totals as seen by the Tropical Rainfall Measuring Mission (TRMM) satellite between May 16 and May 21, 2005, with storm symbols denoting Adrian’s track across El Salvador and Honduras.

The highest rainfall totals for the period exceed 200 millimeters (~8 inches, shown in red) and are mainly offshore. However, similar amounts occur in far western El Salvador and southern Guatemala along the coast near where Adrian made landfall. The rainfall totals quickly drop off inland such that maximum totals are on the order of just 130 mm (5 inches, green areas) or less over central Honduras, the last position where a circulation could be identified. Adrian’s relatively small size and forward progression helped to keep rainfall amounts down.

Since its launch in November of 1997, TRMM has been providing a steady stream of rainfall data over the Tropics. The TRMM-based, near-real time Multi-satellite Precipitation Analysis (MPA) at the NASA Goddard Space Flight Center provides estimates of rainfall over the global Tropics, and was used to generate the rainfall totals seen here.