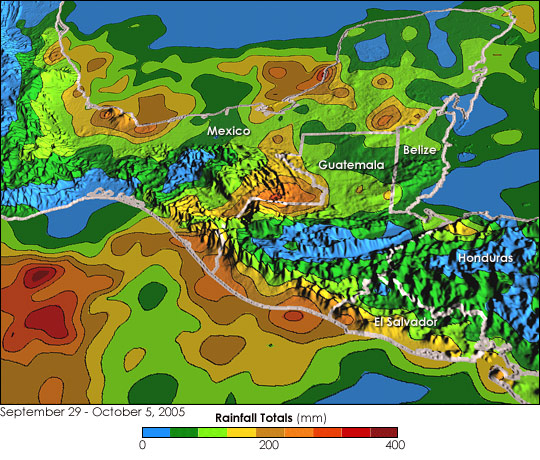 By standard measures, Stan was a small storm. It formed as a tropical depression on October 1, 2005, and barely reached hurricane status before going ashore in southern Mexico on October 4. In the intervening period, the storm moved over the Yucatan Peninsula, drenching Belize, Guatemala, Honduras, El Salvador, and Mexico with heavy rain. Though the winds never reached more than 130 kilometers per hour (80 miles per hour), the storm proved to be one of the most devastating since Hurricane Mitch struck the region in 1998.

Stan dropped heavy rains on parts of Central America for several days, triggering deadly floods and landslides. This image, made using data collected by the Tropical Rainfall Measuring Mission (TRMM) satellite between September 29 and October 5, 2005, shows rainfall totals over the affected countries. The highest rainfall is shown in deep red, while the lightest is in blue. The rainfall data is laid over a topographical map. As this image illustrates, the rain fell over steep mountains. The water released sections of earth, and both water and mud flooded the populated valleys. Floods and mudslides forced thousands from their homes and damaged roads and bridges throughout the region. News reports claim that more than 100 people have died in the floods, but differ on the exact number.

Hurricane Stan inundated Central America with days of heavy rain during the first week of October 2005. The rains have triggered deadly floods and landslides through several countries.