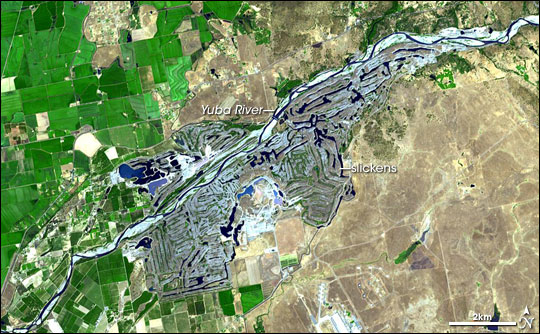 For hundreds of thousands of years, the Yuba River steadily washed sand and gravel out of the granite peaks of the Sierra Nevada and deposited it onto the flat floor of the Sacramento Valley. This gradual process changed abruptly when James Marshall discovered gold in the races of Sutter’s Mill in 1848. Miners flooded the area, and the California Gold Rush—and its controversial environmental legacy—began.

This image from the Advanced Spaceborne Thermal Emission and Reflection Radiometer (ASTER) aboard NASA’s Terra satellite shows the Yuba River Goldfields on August 29, 2001. The long gray shapes are hills of gravel interspersed with blue ponds. Bright green fields dominate the terrain on the west side of the image, while barren, non-irrigated land is to the east.

The first Yuba-area miners panned for gold in stream beds in the valley, but within a decade large-scale industrial processes replaced solitary prospectors. Mining companies moved from the valley floor into the Sierra Nevada foothills, where miners blasted gravel hillsides with high-pressure jets of water—a process called hydraulic mining. After the miners extracted gold in long wooden sluices, they dumped the gravel back into the mountain valleys. Rivers and streams carried the flood of sediment—called slickens—down to the Sacramento Valley. The volume of waste rock was incredible—685 million cubic feet of debris deposited in the Yuba River. The mine waste carried by the Yuba River ended up burying farms east of the town of Marysville, California. Lawsuits by farmers curtailed hydraulic mining in 1883, but the gravel remained behind in the Yuba Goldfields.

In 1893, the California Debris Commission began to dredge the Yuba near Marysville to mitigate the environmental damage, and piled the gravel along the river’s banks. In the twentieth century, a series of mining companies reprocessed the slickens, extracting gold that was increasing difficult to separate from the gravel. Even though the ore had already been processed, it was the principal source of gold in California for some time. By the 1970s, it was economically impossible to retrieve any more gold, and the debris became a source of aggregate, an essential ingredient of concrete.