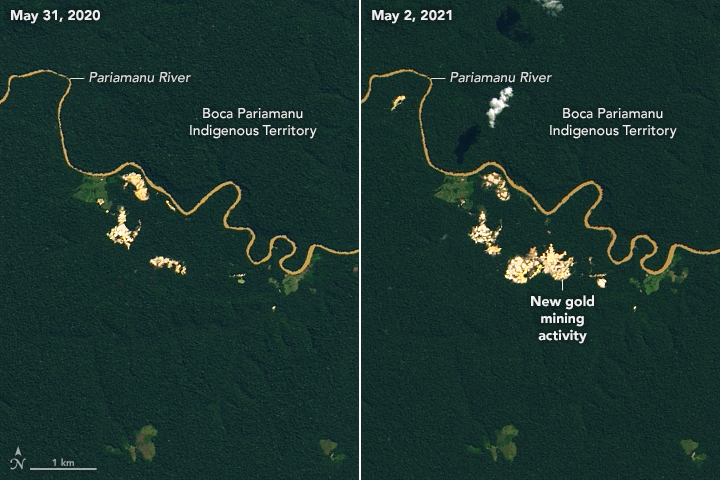 Over the past three decades, small-scale gold mining has led to more than 100,000 hectares (250,000 acres) of forest loss in the Peruvian Amazon. While government agencies and conservation groups have successfully curbed such activity in recent years, new mining hotspots still pop up in unauthorized zones.

The natural-color Landsat 8 images above show the spread of mining activity along the Pariamanu River between May 2020 and May 2021, in a popular gold mining district in Peru’s Madre de Dios department. According to the Monitoring of Andean Amazon Project, more than 200 hectares (500 acres) had been deforested in the Pariamanu area since 2017. The new mines are located outside the permitted mining corridor.

Peruvian researchers from Conservación Amazónica (ACCA), working with NASA and the Peruvian government, have developed a satellite-based tool to locate emerging mining hotspots in the Amazon. The Radar Mining Monitoring Tool (RAMI) identifies areas that appear to have new mining activity and examines their proximity to protected buffer zones, indigenous lands, mining concessions, and already degraded lands. The information is shared with Peruvian authorities to help pinpoint new activity and stop illegal mining.

“Authorities may have limited resources to find all of the mining hotspots in a region,” said Sidney Novoa, project manager for SERVIR-Amazonia and a researcher at ACCA. “There are many systems that monitor forests in Peru, but no one else is focused just on gold mining. Our main goal is to empower authorities and give them enough resources to prioritize and focus their efforts.” 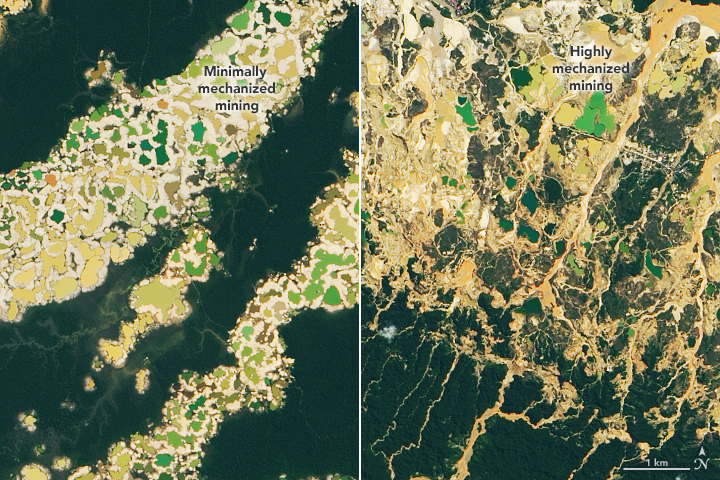 The research team is particularly interested in detecting small-scale, artisanal gold mining, typically operated by independent miners known as garimperos. In recent decades, the number of artisanal mines in the Madre de Dios department of Peru has increased, carving out a larger environmental footprint than industrial mines. Artisanal miners use mercury, which can pollute water sources and lead to neurological disorders or kidney issues in humans who are exposed to it. Illegal mining in protected zones also can compromise the homes of indigenous people, as well as endemic plants and animals.

The map below, which uses data from the RAMI tool, shows a snapshot of mining in southeastern Peru from January to May 2021. The red polygons show changes in land cover attributed to new mining activity. The data are derived from synthetic aperture radar (SAR) observations made by the European Space Agency’s Copernicus Sentinel-1 satellite. Unlike optical imagery from Landsat, SAR penetrates cloud cover and allows more frequent observations in the often-cloudy region. 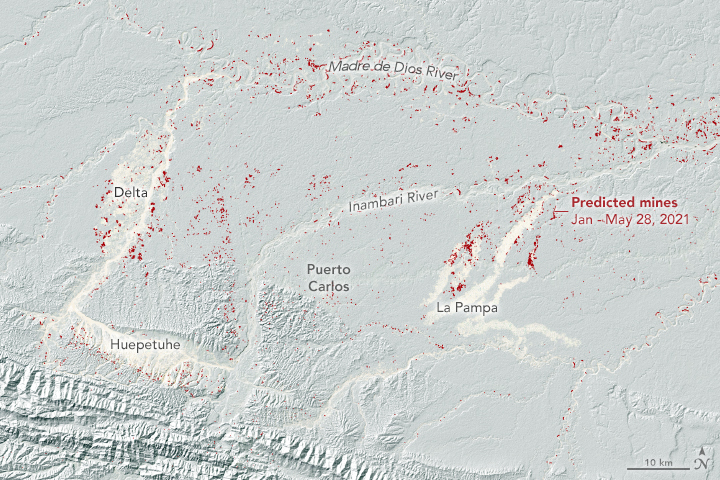 “I used to put aside looking at mining activity during the rainy season because authorities thought it would not occur intensely during those months,” said Novoa. “We finally have information to demonstrate the importance of monitoring mining activities during rainy season.” He explained that activity typically intensifies once the peak of the rainy season passes in February and March, as garimperos use the accumulated water in forests and waterways for their mining.

RAMI mining alerts are updated every 15 days depending on the availability of satellite data. Novoa’s team creates private reports about new hotspots for the Monitoring of the Andean Amazon Project (MAAP), an initiative from Amazon Conservation Association and ACCA. Summaries are also shared directly with Peruvian authorities. The RAMI tool is hosted on the Internet and open to the public.

RAMI is supported by SERVIR-Amazonia, a joint program of NASA and the U.S. Agency for International Development (USAID) that uses remote sensing to provide support for sustainable development. It is led locally by the Alliance of Bioversity International and the International Center for Tropical Agriculture (CIAT). The RAMI tool was co-developed with and incorporated data from ACCA, Peru’s Ministry of Environment, and Peru’s National Forest Conservation Program.