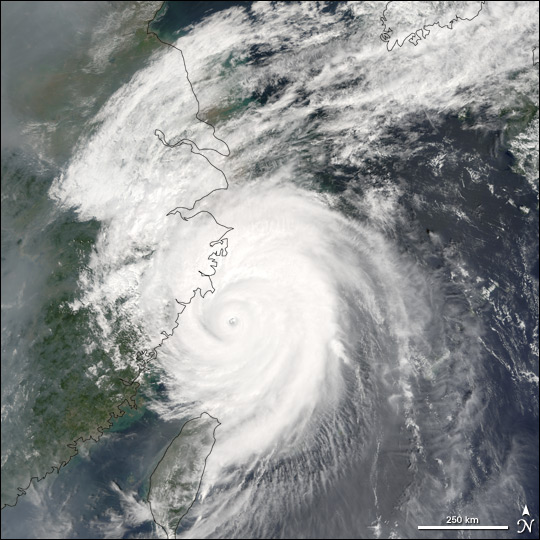 Typhoon Khanun was poised to make landfall on the coast of mainland China when the Moderate Resolution Imaging Spectroradiometer (MODIS) on NASA’s Terra satellite captured this image at 11:20 a.m. local time, on September 11, 2005. At the time of this MODIS observation, Khanun had sustained winds of 210 kilometers per hour (130 miles per hour).

As Khanun moved in towards China, outflowing wind patterns from the storm pushed away polluted air ahead of it. In the MODIS image, this wind pattern shows up as clear views immediately outside the cloud bands, while smog piles up just beyond the storm’s influence. Khanun is the 15th typhoon to hit China in 2005. The storm is believed to be responsible for 14 reported deaths, mostly from mudslides caused by the heavy rains brought in with the storm system. The land is already saturated from other recent typhoons, so the risk of mudslide events has been unusually high. Nearly one million people were evacuated from coastal areas in the typhoon’s path, including some residents of Shanghai.