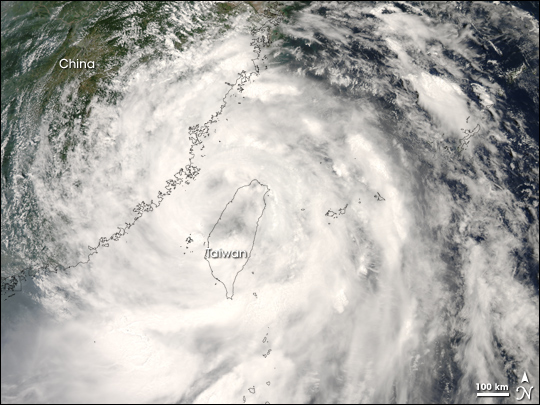 Typhoon Fung-Wong was lashing Taiwan and coastal China with high winds, rain, and storm surge on the morning of July 28, 2008, reported the BBC World News Service. The Category 2 typhoon had crossed Taiwan, with the center of the storm more or less bisecting the island. Most offices and businesses, including the stock market, were closed for the day.

This natural-color satellite image, obtained by the Moderate Resolution Imaging Spectroradiometer (MODIS) on NASA’s Aqua satellite, shows Typhoon Fung-Wong as it appeared at 1:20 p.m. local time (5:20 UTC) on July 28, 2008. The storm had crossed Taiwan and was headed toward China. The crossing of Taiwan had disrupted the shape and power of the storm. The central eye was still evident in this satellite image, but no longer clear and well-formed.

After barreling its way across Taiwan, Fung-Wong weakened to Category 1 strength, but it still posed a significant threat to coastal communities in mainland China. Forecasters with the Joint Typhoon Warning Center were predicting the storm would make second landfall late on July 28 as a tropical storm.