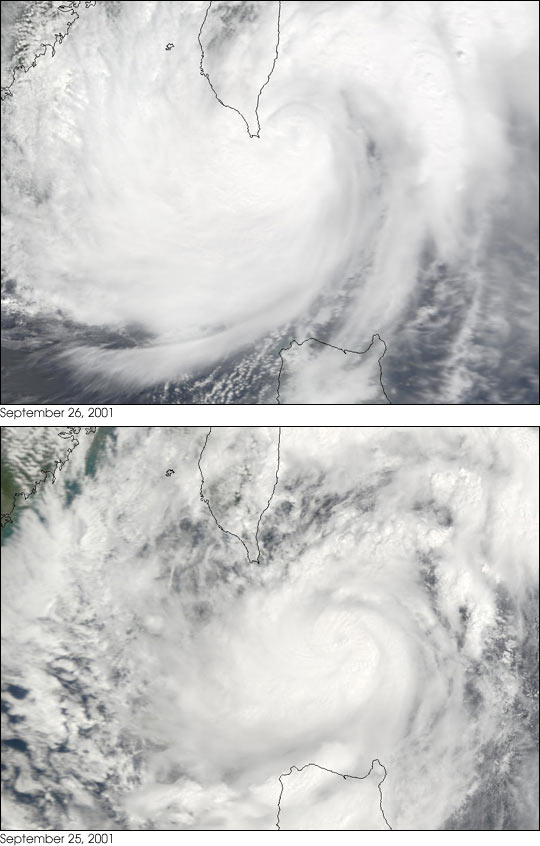 Typhoon Lekima smacked southern Taiwan today (Sept. 26, 2001) with high winds and torrential rains. Luckily, no casualties or damages have been reported in the storm's aftermath. Lekima, the eighth typhoon to hit the island nation this year, brought sustained winds of 103 miles per hour (166 km per hour) and gusts of up to 127 miles per hour (203 km per hour). Tragically, Pacific typhoons thus far this season have killed 300 Taiwanese and caused well over $100 million in damages in that country.

Later, on the afternoon of Sept. 26, Typhoon Lekima was downgraded to a tropical storm. The storm was moving north-northwest at about 7 miles per hour (11 km per hour). The storm was expected to weaken over the next 24 hours as it traveled toward China. "Lekima" is the name of a Vietnamese fruit tree.

These true-color images were acquired by the Moderate-resolution Imaging Spectroradiometer (MODIS), flying aboard NASA's Terra satellite. These scenes were collected on consecutive days--September 25 and 26--showing Typhoon Lekima's slow progress toward Taiwan's southern coast.