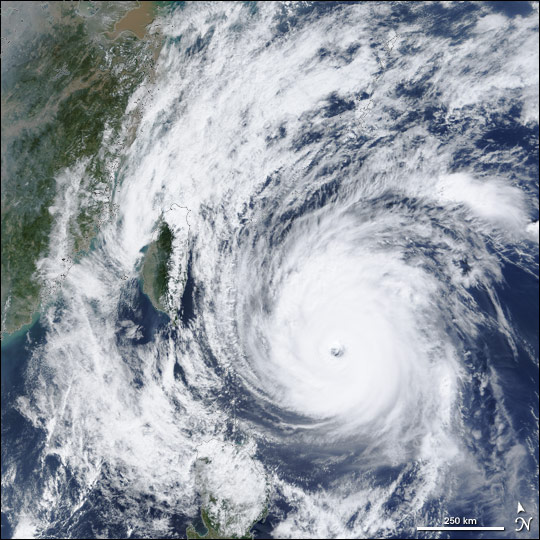 Typhoon Nock-Ten hammered Taiwan with heavy rains and strong winds on October 25, 2004, killing at least four, according to media reports. Heavy rains drenched northeastern Taiwan, triggering extensive flooding. Though winds had dropped to about 170 kilometers per hour (100 mph) when the storm blew ashore, at its height, Nock-Ten’s maximum sustained winds reached 204 kilometers per hour (127 mph) with stronger gusts. This image of the storm was acquired on October 24, by the Moderate Resolution Imaging Spectroradiometer (MODIS) on NASA’s Terra satellite a few hours after the storm began to weaken.

Nock-Ten, “bird” in Laotian, is the sixth typhoon to strike Taiwan and the 24th to develop in the western Pacific this year. After moving across northern Taiwan, the storm curved east over the East China Sea and weakened into an extra-tropical depression as it approached Japan’s southern islands on October 26.

Typhoon Nock-Ten hammered Taiwan with strong winds and heavy rains on October 25. It is the 24th typhoon to develop in the western Pacific in 2004.