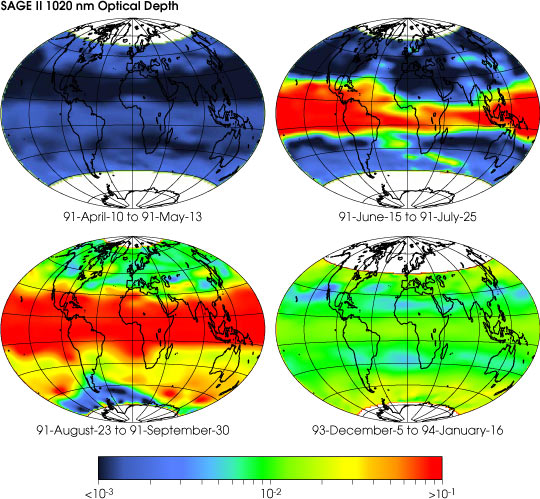 Ten years ago today (June 15, 2001), Mount Pinatubo in the Philippines erupted with a tremendous force, ejecting vast amounts of ash and gas high into the atmosphere; so high that the volcano’s plume penetrated into the stratosphere. The stratosphere is the layer of atmosphere extending from about 10 km to 50 km (6-30 miles) in altitude. Pinatubo injected about 15 million tons of sulfur dioxide into the stratosphere, where it reacted with water to form a hazy layer of aerosol particles composed primarily of sulfuric acid droplets. Over the course of the next two years strong stratospheric winds spread these aerosol particles around the globe.

Unlike the lower atmosphere (or troposphere, which extends from the surface to roughly 10 km), the stratosphere does not have rain clouds as a mechanism to quickly wash out pollutants. Therefore, a heavy influx of aerosol pollutants, like the plume from Mount Pinatubo, will remain in the stratosphere for years until the processes of chemical reactions and atmospheric circulation can filter them out. In the case of Mount Pinatubo, the result was a measurable cooling of the Earth’s surface for a period of almost two years.

Because they scatter and absorb incoming sunlight, aerosol particles exert a cooling effect on the Earth’s surface. The Pinatubo eruption increased aerosol optical depth in the stratosphere by a factor of 10 to 100 times normal levels measured prior to the eruption. (“Aerosol optical depth” is a measure of how much light airborne particles prevent from passing through a column of atmosphere.) Consequently, over the next 15 months, scientists measured a drop in the average global temperature of about 1 degree F (0.6 degrees C).

The images above were acquired by the Stratospheric Aerosol and Gas Experiment II (SAGE II) flying aboard NASA’s Earth Radiation Budget Satellite (ERBS). The false-color images represent aerosol optical depth in the stratosphere during four different time spans, ranging from before the June 1991 Pinatubo eruption to two years after the event. Red pixels show the highest values, while dark blue shows the lowest values, which are normally observed in the stratosphere. Notice how the volcanic plume gradually spreads across virtually the entire globe, hence the global-scale impact on climate.

For more details, read Astronauts Photograph Mount Pinatubo, on the Earth Observatory. Related information resources can be found at 10th Anniversary of the Eruption Felt Around the World. Also, be sure to check out The Volcano and the Climate Model—a case study produced by the American Museum of Natural History.

These satellite images of the Eyjafjallajökull eruption show not only the extent of the plume, but also the amount and type of particles in the plume.