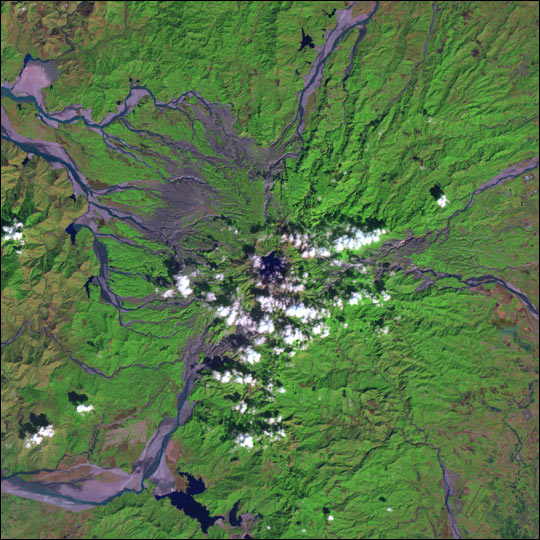 On June 15, 1991—ten years ago today— Mount Pinatubo in the Philippines exploded in the Twentieth Century’s most violent volcanic eruption. In the decade following, scientists used NASA remote sensing technology to study the effects of the eruption on climate as well as how the volcano and its surrounding area changed over time.

This Landsat 7 false-color image of Mount Pinatubo, acquired in January 2001, was made using a combination of shortwave infrared, near infrared, and green light. In the center of the image (partially obscured by clouds) is Pinatubo Crater Lake, which was formed by rainwater collecting in the caldera left by the 1991 eruptions. Heat from the volcano warms the water to 24°C (75°F). The grey areas radiating away from the volcano itself are stream valleys filled with volcanic debris. Since the eruption, heavy rains falling on the loose volcanic debris have caused frequent mudslides, called lahars, that filled pre-existing streams and river beds. Green vegetation has returned to the slopes of the mountain itself and older lahars.