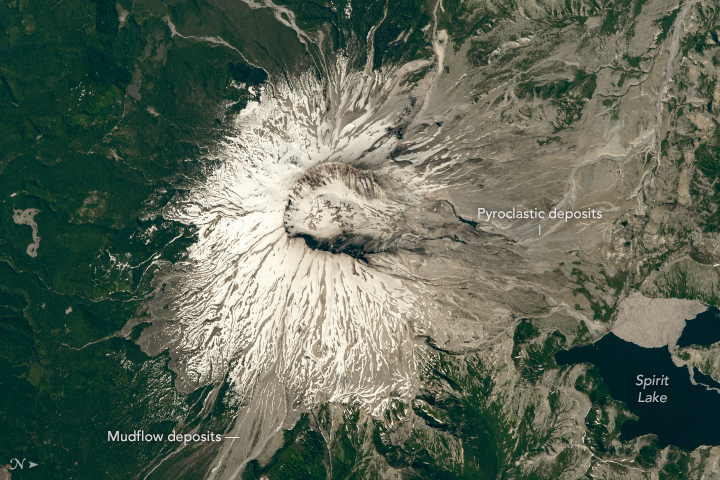 An astronaut aboard the International Space Station shot this photograph of Mount St. Helens almost 37 years after the cataclysmic volcanic eruption. Fifty-seven people lost their lives and thousands of animals were killed by the violent eruption that lasted nine hours and dramatically changed the landscape.

On the morning of May 18, 1980, a magnitude 5.1 earthquake caused the north face (facing right in this image) of the stratovolcano to detach and slide away, creating the largest landslide ever recorded. The great movement of mass and weight by the landslide allowed for the partially molten, highly pressurized, gas-rich rock inside the volcano to erupt. A column of ash rose 80,000 feet from the summit into the atmosphere and deposited ash across 12 U.S. states. Nearly 150 square miles of forest were blown over from the turbulent wind generated by the pressurized gas explosion.

A mixture of lava and rock fragments (pyroclastic deposits) spilled down the north face of the mountain toward Spirit Lake, resulting in the characteristic horseshoe-shaped crater. The heat released during the eruption caused the glaciers on the volcano to melt and mix with rocks and ash. These lahars, or volcanic mudslides, flowed as far as the Columbia River (approximately 50 miles away).

The volcano continued to erupt less violently until 1986, with volcanic activity transitioning to thick flows and lava dome growth. Heightened activity resumed from 2004 to 2008, with ash and steam eruptions and the growth of a second lava dome. The volcano is still actively monitored by the U.S. Geological Survey for gas emissions and earthquakes.

In the years after the initial eruption, the land around the volcano was passed from the Burlington Northern Railroad to the U.S. Forest Service. In 1982, Mount St. Helens National Volcanic Monument was created, and the environment was left to respond naturally to the disaster. The area has gradually come back to life since the late 1980s. The minerals and nutrients deposited in Spirit Lake during the eruption are responsible for the vibrant and rapidly growing trout and aquatic vegetation populations. With the volcano currently in a relatively quiet state, it is now a popular tourist destination for climbers to make the journey to the crater rim.

Astronaut photograph ISS052-E-8512 was acquired on June 25, 2017, with a Nikon D4 digital camera using an 1150 millimeter lens and is provided by the ISS Crew Earth Observations Facility and the Earth Science and Remote Sensing Unit, Johnson Space Center. The image was taken by a member of the Expedition 52 crew. The image has been cropped and enhanced to improve contrast, and lens artifacts have been removed. The International Space Station Program supports the laboratory as part of the ISS National Lab to help astronauts take pictures of Earth that will be of the greatest value to scientists and the public, and to make those images freely available on the Internet. Additional images taken by astronauts and cosmonauts can be viewed at the NASA/JSC Gateway to Astronaut Photography of Earth. Caption by Sarah Deitrick, Jacobs, JETS Contract at NASA-JSC.