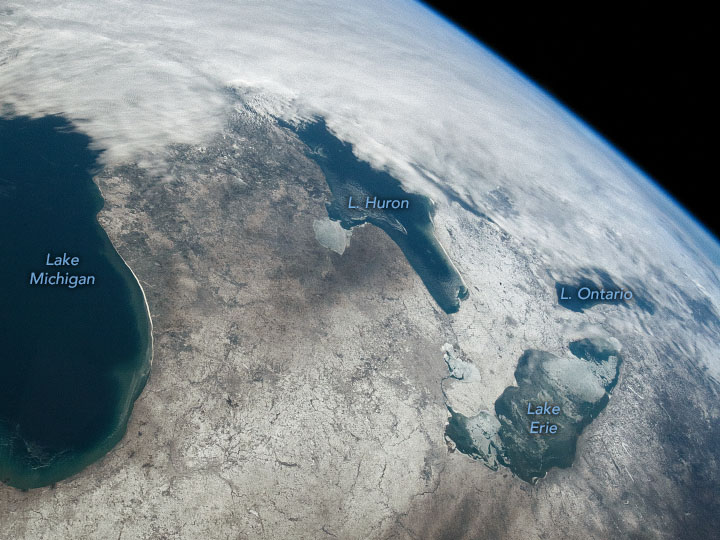 On February 17 and 18, 2022, a strong winter storm brought snow, sleet, and rain to the Great Lakes area of the U.S. and Canada. An astronaut aboard the International Space Station snapped this photograph on February 20, 2022, after the storm.

At the time, the space station was orbiting directly over northern Iowa, but the oblique angle of the photo shows areas farther to the east including Michigan, Ontario, and the Great Lakes. Clouds still obscured parts of northern Michigan and Ontario, but clear skies prevailed in areas south. Notice the band of snow between Lake Huron and Lake Erie. This is where the storm dropped nearly 7 inches (18 centimeters) of snow in places.

The photograph also shows plenty of ice on Lake Huron—most notably in Saginaw Bay—and across much of Lake Erie. Almost one week later, ice cover on the Great Lakes reached its maximum extent for the 2021–2022 winter, measuring slightly above average (calculated since the start of record keeping in the early 1970s).

Ice on individual lakes can peak earlier or later depending on conditions that change daily. Lake Erie’s ice cover, for example, peaked late in January 2022 at 94 percent. It then dipped to 62 percent on February 3 and rose to 90 percent on February 5. By the time of this image on February 20, coverage had dropped to 81 percent. Quickly shifting ice cover is often a response to swift changes in wind conditions or air temperature.

The initiation of ice formation depends on factors such as the lake’s latitude, size, and depth. Notice in this image that Lake Michigan and Lake Ontario—significantly deeper lakes than Lake Erie—are still largely unfrozen. The exposed water on these lakes can provide the moisture for lake-effect snow. The phenomenon contributed to the huge accumulations of snow during a historic winter storm later in the year, when snowfall totals reached more than 50 inches (130 centimeters) in communities east of Lake Ontario and Lake Erie.

Astronaut photograph ISS066-E-147455 was acquired on February 20, 2022, with a Nikon D5 digital camera using a focal length of 24 millimeters. It is provided by the ISS Crew Earth Observations Facility and the Earth Science and Remote Sensing Unit, Johnson Space Center. The image was taken by a member of the Expedition 66 crew. The image has been cropped and enhanced to improve contrast, and lens artifacts have been removed. The International Space Station Program supports the laboratory as part of the ISS National Lab to help astronauts take pictures of Earth that will be of the greatest value to scientists and the public, and to make those images freely available on the Internet. Additional images taken by astronauts and cosmonauts can be viewed at the NASA/JSC Gateway to Astronaut Photography of Earth. Story by Kathryn Hansen.

Land and water were decorated with snow and ice when astronauts looked down on the region in February 2022. 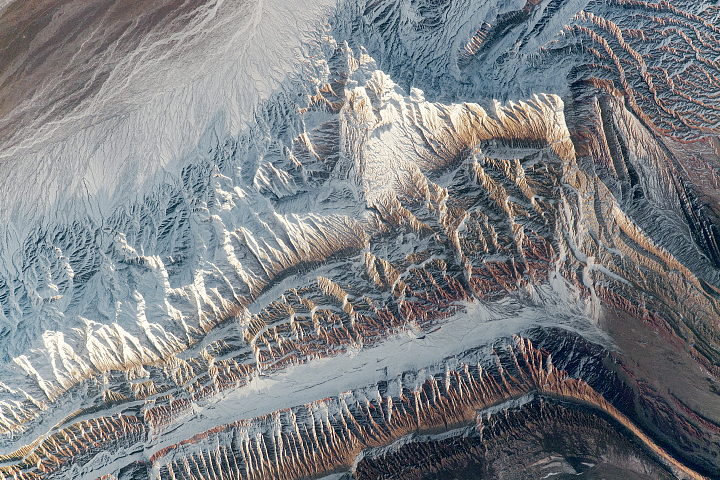 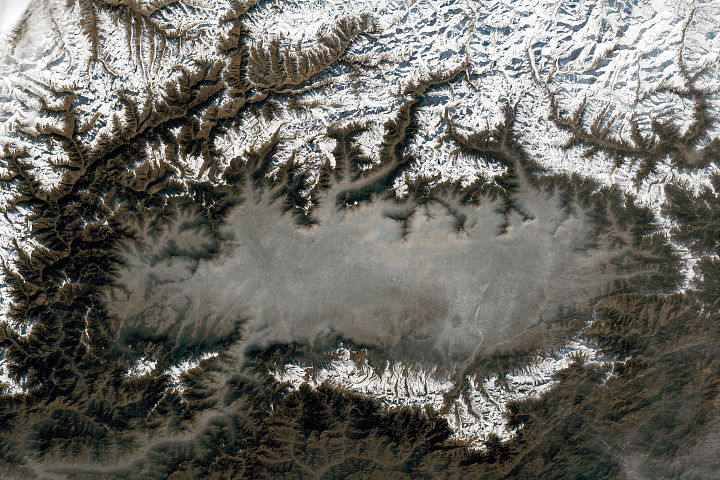