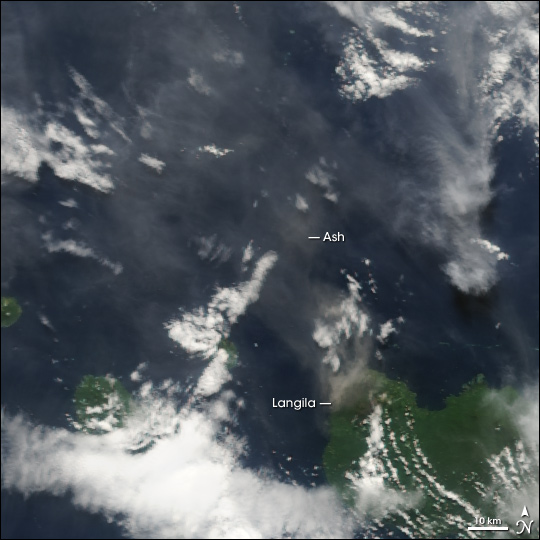 Since June 2, 2005, Langila Volcano, in Papua New Guinea’s West New Britain province, has erupted continuously, according to the International Federation of Red Cross and Red Crescent Societies. The volcano has discharged unusually heavy loads of ash. Initially, winds carried the ash clouds northward over the ocean. Changing winds, however, have begun returning the ash to the island.

The Moderate Resolution Imaging Spectroradiometer (MODIS), flying on NASA’s Terra satellite captured this image on June 13, 2005. A cloud of volcanic ash appears over the ocean, north of the Langila Volcano near the bottom right corner of the image.

Approximately 10,000 people live in the volcano’s vicinity, in a remote area where radio communication is unreliable and access is only by boat or helicopter. Because lightning damaged instruments at the region’s volcano observatory, the Langila Volcano must be monitored visually. Meanwhile, fallen ash has damaged food crops and exacerbated the dry season. It has also caused widespread eye and respiratory irritation.

On June 6, 2005, visitors from the West New Britain provincial disaster office determined that the volcano had affected more than 3,000 residents. This number is expected to rise to as many as 6,000. The provincial authorities are encouraging voluntary evacuation.

The Langila Volcano on the island of New Britain in Papua New Guinea, began erupting on June 2, 2005.