Karst and Colors on the Yucatán Peninsula 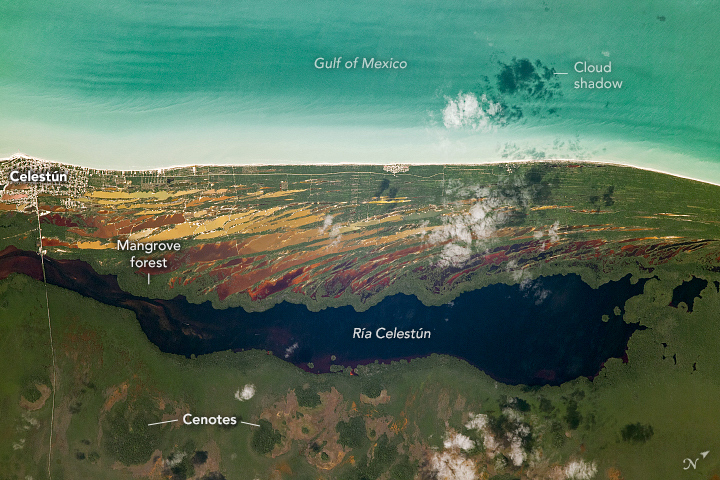 From an astronaut’s perspective, the wetlands along the northwest coast of the Yucatán Peninsula are arrayed in distinct colors. This photograph, taken from the International Space Station (ISS), captures the diversity of the estuarian landscape near Celestún, a fishing village in Yucatán, Mexico.

Dark green mangrove forests surround Ria Celestún and are interwoven between smaller estuaries reaching toward the Gulf of Mexico. The ebb and flow of ocean currents suspends and resuspends sediments here, giving the shallow, brackish estuaries hues of orange and reddish-brown.

Inland, the dissolution and collapse of limestone bedrock help form sinkholes called cenotes. These geologic features are a type of karst topography that forms when carbonic acid in groundwater dissolves calcium carbonate in the rocks. These porous limestone sinkholes filter salt out of seawater, creating reservoirs that have been used as freshwater resources since the Mayan Civilization.

The cenotes of the Yucatán Peninsula form along the buried rim of Chixculub Crater, outlining the deep scar left behind from an ancient asteroid or comet impact. In 2021, NASA’s Terra satellite captured a wider view of the ring of cenotes.

Astronaut photograph ISS066-E-43471 was acquired on October 30, 2021, with a Nikon D5 digital camera using a focal length of 200 millimeters. It is provided by the ISS Crew Earth Observations Facility and the Earth Science and Remote Sensing Unit, Johnson Space Center. The image was taken by a member of the Expedition 66 crew. The image has been cropped and enhanced to improve contrast, and lens artifacts have been removed. The International Space Station Program supports the laboratory as part of the ISS National Lab to help astronauts take pictures of Earth that will be of the greatest value to scientists and the public, and to make those images freely available on the Internet. Additional images taken by astronauts and cosmonauts can be viewed at the NASA/JSC Gateway to Astronaut Photography of Earth. Caption by Amber Turner, Jacobs, JETS Contract at NASA-JSC.

Sediments and mangroves paint the wetlands, while sinkholes dot the land surface. 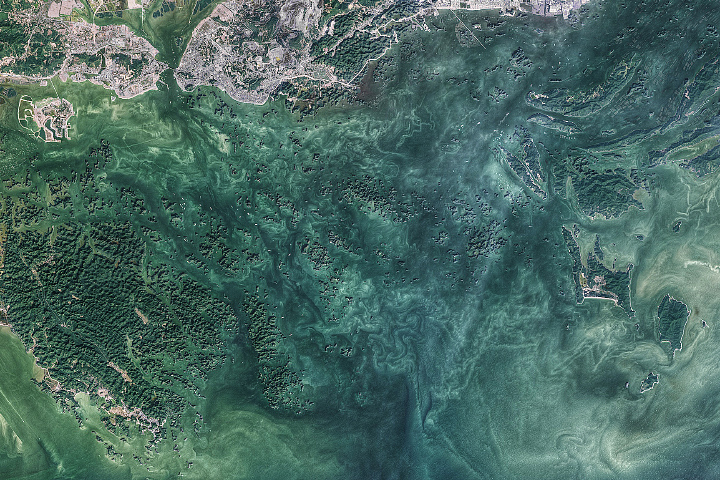