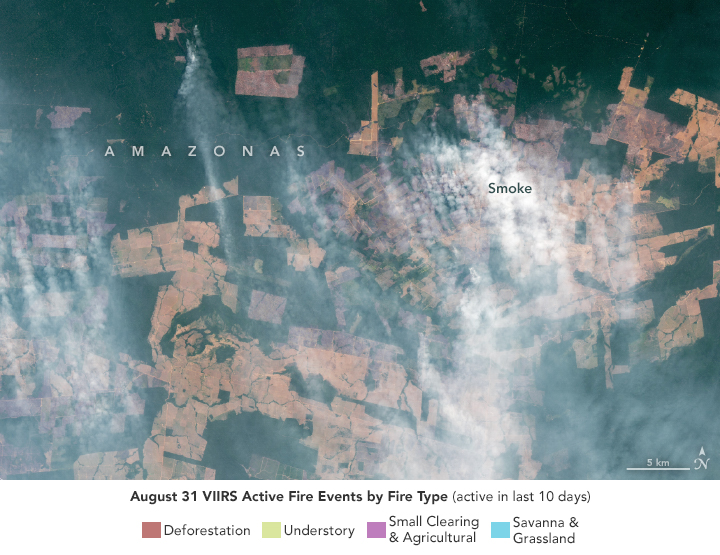 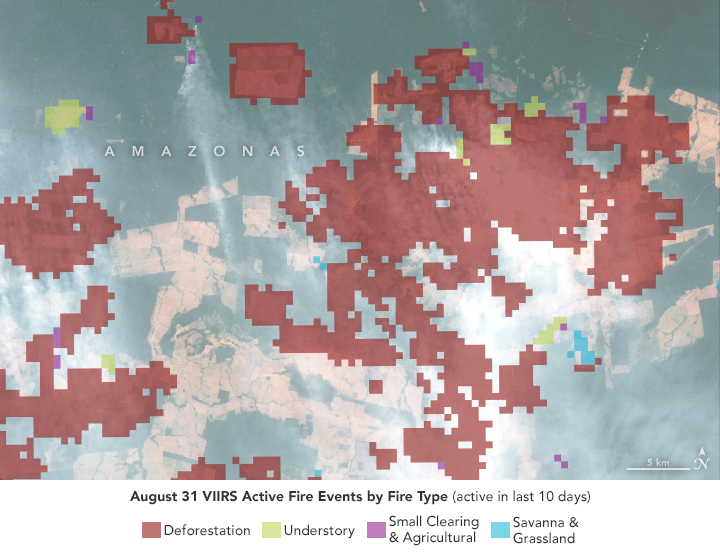 Since the 1970s, tree clearing in the Amazon basin has reduced the size of the Amazon rainforest by roughly 17 percent. That is an area about the size of Texas and Louisiana combined.

While there have been slowdowns and surges in the tempo of forest loss over the decades, recent data indicate that deforestation rates over the past two years have been among the highest in a decade. As a result, smoky satellite images of fires in the southern Amazon have become increasingly common.

The Operational Land Imager (OLI) on Landsat 8 acquired a detailed view (above) of fires burning in Amazonas northeast of Vista Alegre do Abunã on August 24, 2021. On the same day, the Moderate Resolution Imaging Spectroradiometer (MODIS) on NASA’s Aqua satellite acquired the natural-color image below showing several large smoke plumes near the border of the Brazilian states of Amazonas and Rondônia.

People living in the Amazon basin often light small-scale fires in already cleared areas to maintain pastures and fields, but many of the largest and smokiest fires visible in these images were tied to deforestation, according to a satellite-based fire classification tool developed by Niels Andela (previously at NASA but now at Cardiff University) and Douglas Morton, chief of the Biospheric Sciences Laboratory at NASA’s Goddard Space Flight Center.

“Fire activity across the Amazon region has spiked since late July 2021, driven primarily by deforestation fires,” said Morton. “This is clearly the case for northern Rondônia, where our analysis shows that 80 percent of fire detections from the satellites are associated with deforestation fire events.” 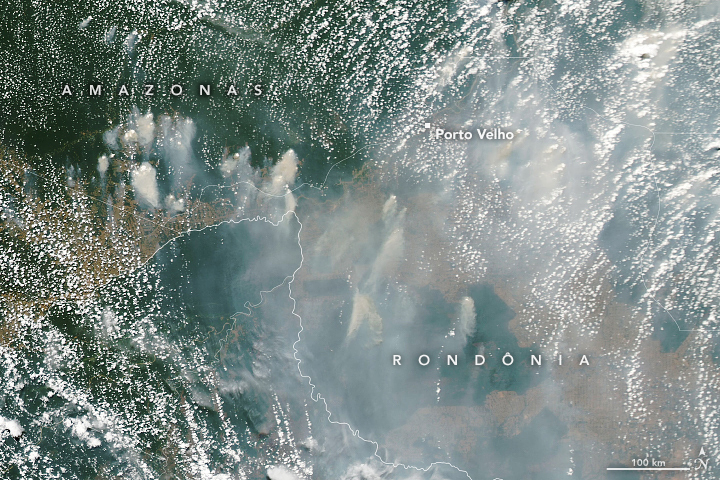 Morton and colleagues share their insights on South American fires through NASA’s Amazon fire dashboard, a tool that helps observers distinguish between fires that cause more and less ecological damage. Deforestation and understory forest fires (low-intensity blazes that creep along the leaf litter on the forest floor) cause the most lasting damage and contribute to the build-up of carbon dioxide and other greenhouse gases in the atmosphere. Savanna and small clearing fires tend to have short-lived effects. The dashboard assimilates observations of the intensity and patterns of active fire detections by the Visible Infrared Imaging Radiometer Suite (VIIRS) sensor. (Read this for more details about how the tool categorizes fires.)

The deforestation fires in this area are notable for their size and intensity. “What is happening there is nothing like the small-scale clearing done by families that was common decades ago,” explained Morton. “These newer clearings are well beyond the scale of what a family could do. We have already identified 10 deforestation fire events in Rondônia that are larger than 50 square kilometers—meaning each one is larger than a combined 7000 soccer fields.”

Fire activity has also accelerated in recent weeks in southern Amazonas state, one of the fastest-growing frontiers of agricultural expansion across the Brazilian Amazon. “We’re seeing a resurgence of deforestation in an old frontier (Rondônia) spilling into a new frontier in southern Amazonas based on recent changes in road access and demand for agricultural land,” said Morton. The emergence of large fires in this area does not come as a surprise. “These are the same places where other tools that detect forest removal—like Brazil’s satellite-based PRODES and DETER systems—have shown major losses in recent years.”

Most newly cleared land in this area will likely be used for cattle pasture, at least initially. In some parts of Brazil, it is fairly common for farmers to start cultivating soybeans in areas that were initially cleared for cattle, a process that can be tracked using time-series imagery from MODIS and Landsat.

Every year, scientists from NASA and other institutions analyze sea surface temperatures and other environmental variables to forecast whether climate conditions are likely to exacerbate seasonal fire activity. When sea surface temperatures are especially warm in the tropical Atlantic, there tends to be drier weather in the western Amazon and more fire activity. In dry years, fires often escape their intended boundaries and burn uncontrolled in forests and savannas for weeks or even months. Such conditions occurred in 2005, 2010, and 2020.

“In 2021, we have conditions that are closer to normal in the Atlantic, though water temperatures are slightly above normal,” said University of Arkansas climate scientist Kátia Fernandes. “That implies fire activity in this region may end up as average or just slightly above based on the background climate conditions. But how the fire season ultimately plays out will depend strongly on human behavior. If we see people lighting large numbers of fire for deforestation, we could still end up seeing an unusually active fire year.” (You can view the team’s fire forecast here and learn more about the forecasts an online event hosted by the USAID/NASA SERVIR Amazonia project).

NASA’s Amazon dashboard project is not the only tool using satellites to track fire activity in the Amazon as it happens. A team of researchers from the Amazon Conservation Association has developed a fire monitoring app that uses aerosol data from the European Space Agency’s Sentinel-5 satellite to identify a subset of major fires, or those that create the largest smoke plumes. “The fire season is just getting going, but we’re seeing that the vast majority of major fires have burned in recently deforested areas,” said Matt Finer, director of the Monitoring of the Andean Amazon Project. “Fire [in the Amazon] is not some random event. There’s a tight link between deforestation and major fires.” 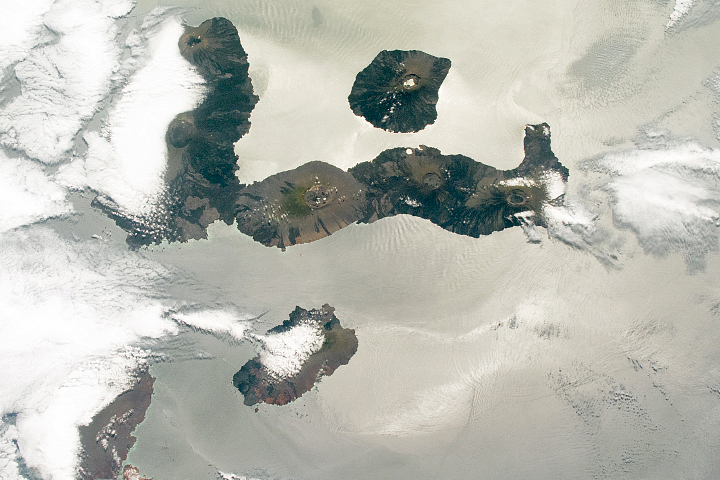