Overwintering Fires on the Rise 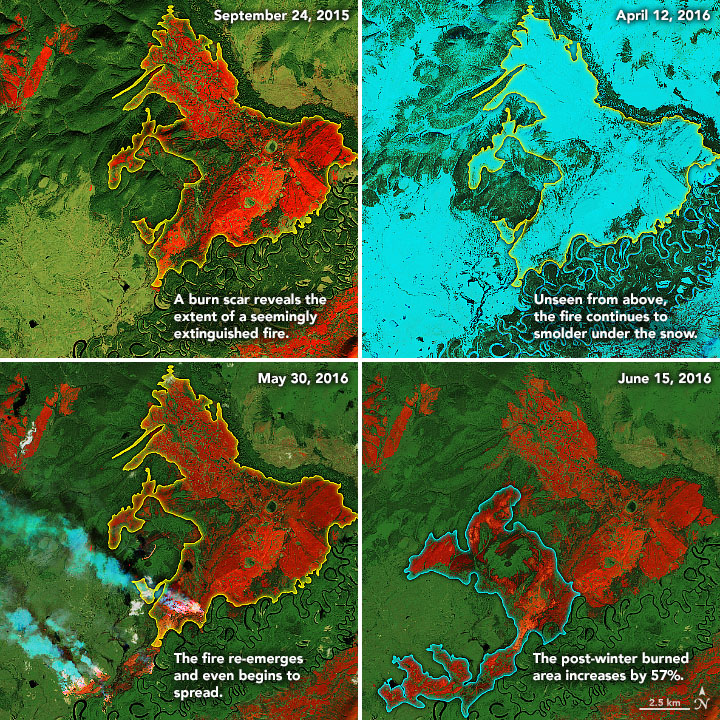 Zombie fires, holdover fires, hibernating fires, or overwintering fires: Whatever you choose to call them, you’re probably going to hear a lot more about them in the coming years. New research shows that this type of wildfire—which can survive the snow and rain of winter to re-emerge in spring—is becoming more common in high northern latitudes as the climate warms.

“Smoldering fires are flaming fires that have entered ‘energy-saver mode,” said Rebecca Scholten of Vrije Universiteit Amsterdam. The fires start above ground, then continue to smolder in the soil or under tree roots through winter. “These fires are only just surviving based on the resources they have—oxygen and fuel—and can transition back into flaming fires once conditions are more favorable.” 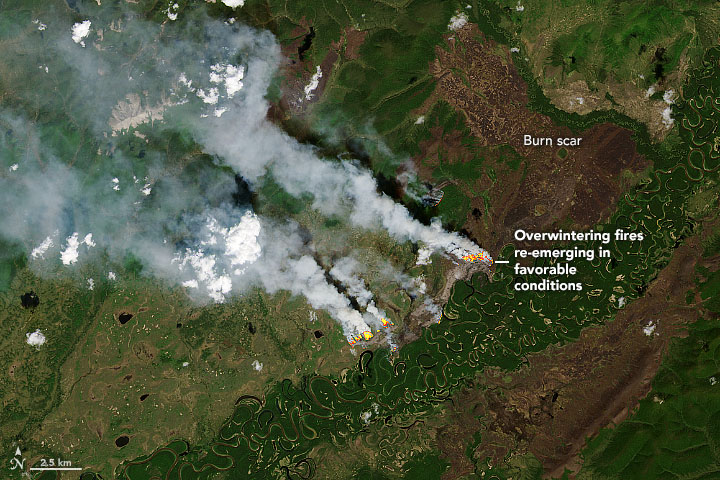 In their research, Scholten and colleagues show that the boreal forests of Alaska and Canada’s Northwest Territories are especially prone to overwintering fires, where fires can burn deep into the organic soil layer. Combining ground-based fire data with fire detection data from NASA’s Moderate Resolution Imaging Spectroradiometer (MODIS) instruments on the Terra and Aqua satellites, the scientists found a way to identify overwintering fires based on their unique characteristics. These fires tend to emerge close to the original fire, and they flare up earlier in the year compared to fires caused by lightning and people.

“For me, the sheer fact that these fires exist and happen every other year now was probably the most surprising finding,” Scholten said. She also notes that early detection could help with fire management and reduce the amount of carbon—stored in large amounts in the region’s organic soils—that gets released to the atmosphere during fires.

The images at the top of this page, acquired with the Operational Land Imager (OLI) on Landsat 8, highlight the progression of a particularly potent overwintering fire in Alaska in 2015-16. The images are false color (OLI bands 7-6-2), which emphasizes hot spots and actively burning fires while distinguishing burned vegetation (brown) from unburned vegetation (green).

The first image (top-left), acquired in September 2015, shows the burn scar from the Soda Creek Fire, which scorched nearly 17,000 acres in southwest Alaska near the Kuskokwim River. The fire was never completely extinguished before winter set in. In April 2016 (top-right), the fire continued to smolder in the soil under a layer of snow.

When the snow finally melted in late May (bottom-left), the additional heat and oxygen caused flames to re-emerge quickly spread. (The second image on this page shows a natural-color version of this image, overlaid with the shortwave-infrared signature of active fire fronts.) The June 2016 image (bottom-right) outlines new burned area from these overwintered fires, which added nearly 10,000 acres to the previously burned area.

The incident was not an isolated case. The study points to numerous fires that overwintered after Alaska’s large fire years of 2009 and 2015, although they can happen after other hot and active fire years, too.

“Although our satellite record of these fires in itself is too short to look at long-term trends, we found that the number of fires that overwinter is strongly linked to summer temperatures and large fire seasons,” Scholten said. “And for these we do see a pronounced upward trend—hotter summers and more burned area—with continued climate warming.”

New research shows that this type of wildfire—which can survive the winter to re-emerge in spring—is becoming more common in high northern latitudes as the climate warms.