A New Park for West Virginia 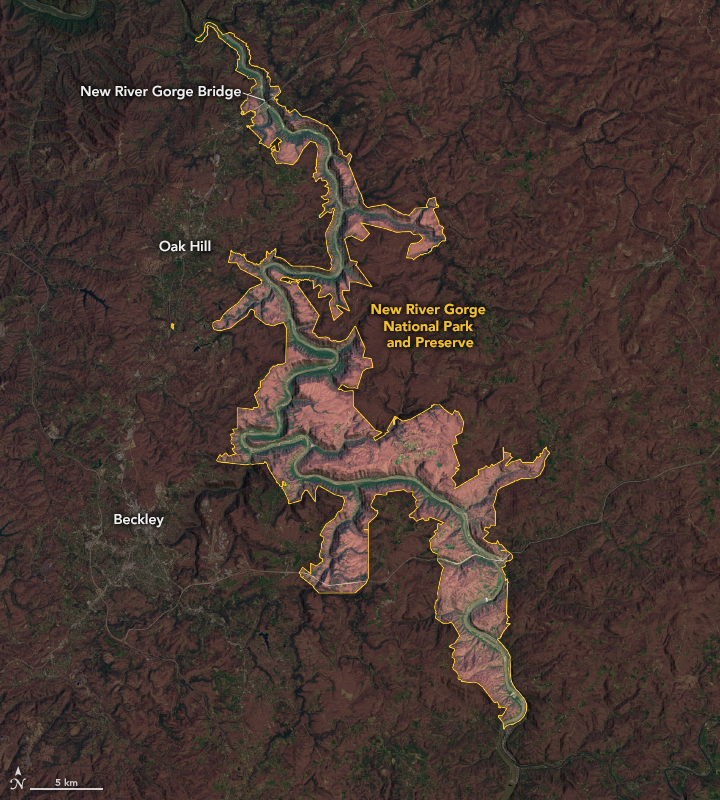 West Virginia has rolling green hills, soaring mountains, and diverse wildlife, but until late in 2020, it did not have a national park. Though it was home to some national rivers and historic sites managed by the National Park Service, it did not have a full-fledged “park”—large areas of land that protect an array of natural and historic features. In December 2020, the United States Congress passed a bill designating the New River Gorge as a national park and preserve, making it the first in the state.

The image above shows the New River Gorge National Park and Preserve in southern West Virginia on April 22, 2020. The image was acquired by the Operational Land Imager (OLI) on the Landsat 8 satellite and overlaid on digital elevation data from the Shuttle Radar Topography Mission (SRTM) to give a sense of the topography. The shading in the image denotes the land within the park.

Despite its name, New River is one of the oldest rivers in the world, dating back more than 300 million years. As the Appalachian Mountains were formed, some believe the New River rose up with the mountains. That is, the river flows at the crest of the mountains instead of following along the base. The river has headwaters in the mountains in North Carolina, passes through Virginia, and enters West Virginia at the southern tip. It continues north, joining with the Gauley River to form the Kanawha, which flows through the state’s capital, Charleston.

The New River Gorge attracts more than a million visitors a year to the area for its famous whitewater rafting courses, as well as hiking, rock climbing, hunting, and fishing. The lower (northern) part of the river contains some Class III to Class V whitewater rapids, among the most challenging for rafters. The upper (southern) part of the river is calmer, with long pools and relatively gentle rapids. 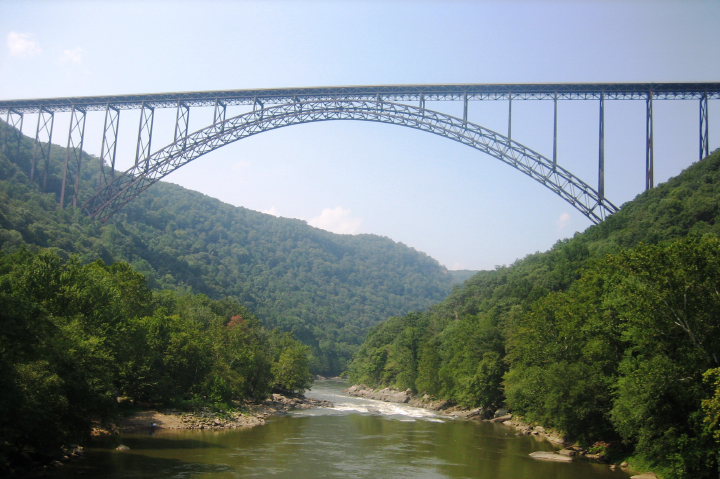 The river is also home to the New River Gorge Bridge, the third tallest bridge in the United States and one of the most photographed features in West Virginia. Completed in 1977, the bridge provided drivers with a direct path across the river, reducing a 40-minute drive down mountain roads to less than a minute. Once a year, the Fayette County Chamber of Commerce hosts “Bridge Day,” a large one day festival and popular celebration in the state. On the third Saturday of October, the bridge is opened to pedestrians and hosts food and crafts vendors, music performances, and rappelling. Bridge Day is also the only day BASE jumpers are allowed to jump off the 876-foot (267-meter) bridge.

Formerly a national river, the New River Gorge and its surrounding areas were managed by the National Park Service since 1978. Under the new designation, the New River Gorge is split into two sections. One includes 65,000 acres that have been designated as a national preserve, with areas where hunting and fishing are permitted. The other contains a 7,000-acre park filled with the rapids, hiking and biking trails, rock climbing spots, waterfalls, a former coal-mining town, and the New River Gorge Bridge.

One of the oldest rivers in the world is famous for its extreme sports and hunting.