Phytoplankton Factory in the Argentine Sea 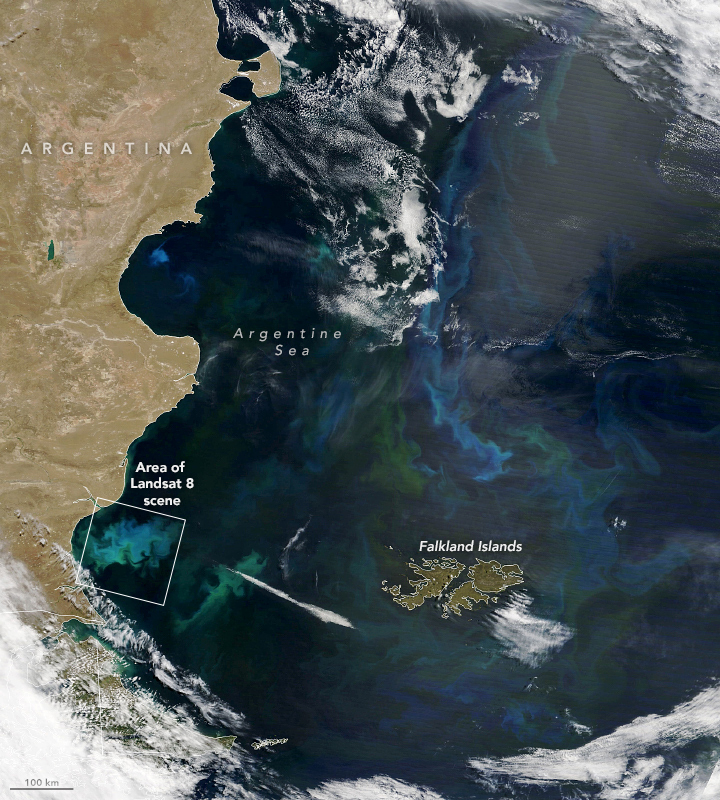 The Goldilocks zone typically refers to the habitable area around a star where conditions are right for the existence of liquid water and possibly life. But on Earth, the South Atlantic Ocean has its own kind of Goldilocks zone. In spring and summer, conditions in the Argentine Sea off Patagonia often become just right for phytoplankton, and populations of the plant-like organisms explode into enormous blooms.

In late 2020, satellite images started to show the colorful signature of phytoplankton blooms off the coast of Argentina and around the Falkland Islands (Islas Malvinas). Vivid greens and blues still swirled in the sea on January 5, 2021, when the Moderate Resolution Imaging Spectroradiometer (MODIS) on NASA’s Terra satellite acquired this natural-color image (above).

The Operational Land Imager (OLI) on Landsat 8 acquired the image below on January 2, 2021. It shows a detailed view of phytoplankton in Grande Bay, off of Argentina’s Santa Cruz province. Part of the Santa Cruz River is visible at the top-left. 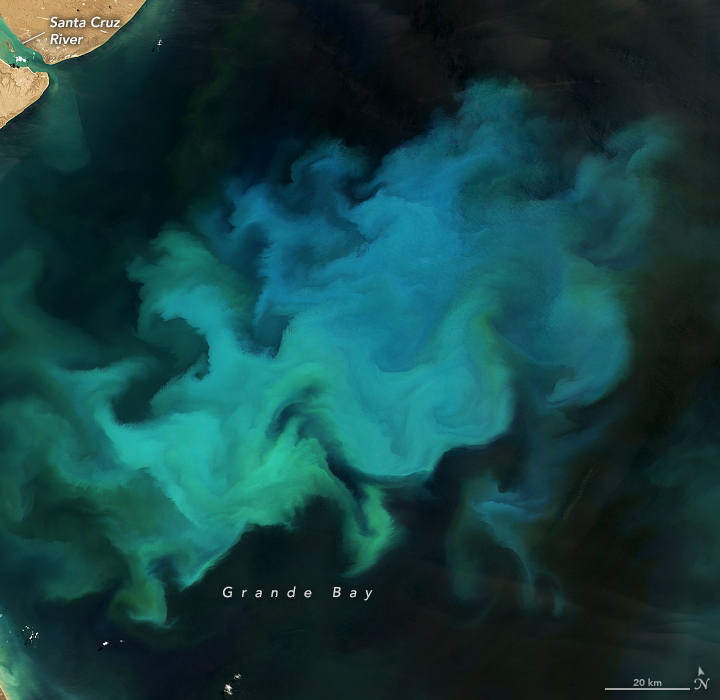 Rivers like the Santa Cruz carry nutrients from the land and deliver them to the ocean, promoting phytoplankton growth. (Suspended sediment could be contributing some of the color visible in these images.) Another source of nutrients is dust from Patagonia, which strong westerly winds can carry offshore and drop on the ocean surface.

But phytoplankton blooms are also stimulated by the ocean’s complex circulation patterns and abundant fronts—where separate water masses (with distinct temperatures, saltiness, and nutrients) meet. At the Brazil-Malvinas Confluence, for example, warm, saltier tropical waters flow south and meet the cooler, fresher waters flowing north from the Southern Ocean. Along a front, the rising of a less-dense water mass can carry nutrients up to the surface, where phytoplankton also have ample sunlight to fuel their growth.

Without a physical sample, it’s not possible to say for sure which type of phytoplankton are present in these images. Scientists found dinoflagellates (Prorocentrum minimum) while collecting samples during an intense bloom in spring 2005; diatoms (Chaetocceros debilis) dominated a bloom in early summer 2003. Both phytoplankton groups tend to appear various shades of green in satellite images. In December 2008, scientists also found a dense bloom of coccolithophores (Emiliania huxleyi), which tend to turn the ocean a chalky green-blue.

Notice the color gradients across the images. Bright green areas could be a mix of dinoflagellates, diatoms, and coccolithophores; in the bluer areas, coccolithophores likely dominate. Coccolithophores can continue to grow in waters where iron has been depleted, whereas diatoms need both silicate and iron.

Whichever species were blooming, their abundance indicates the biological richness along Patagonia’s continental shelf, which is the site of some of the world’s richest fisheries.

In spring and summer, conditions are often just right for populations of the plant-like organisms explode into enormous blooms. 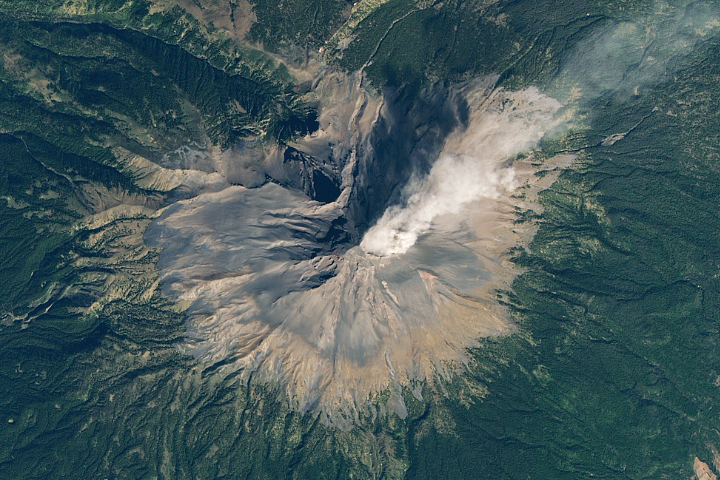