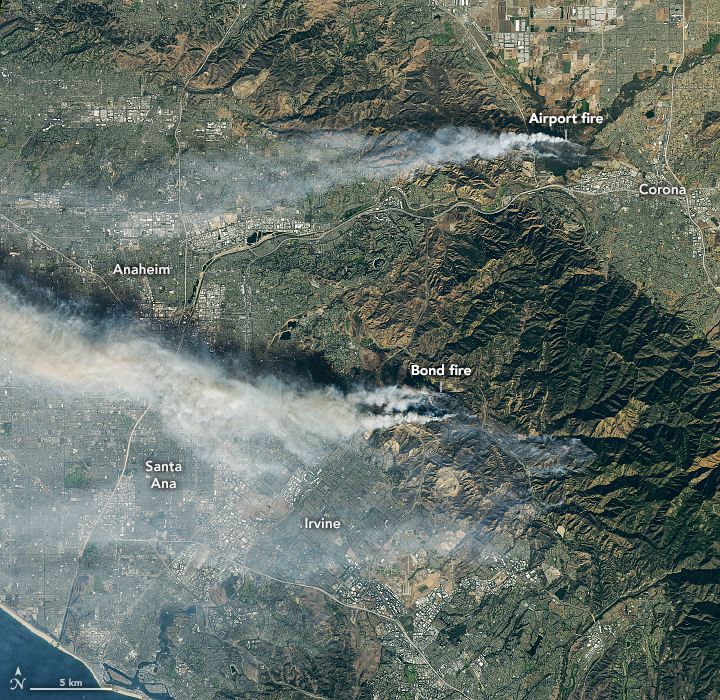 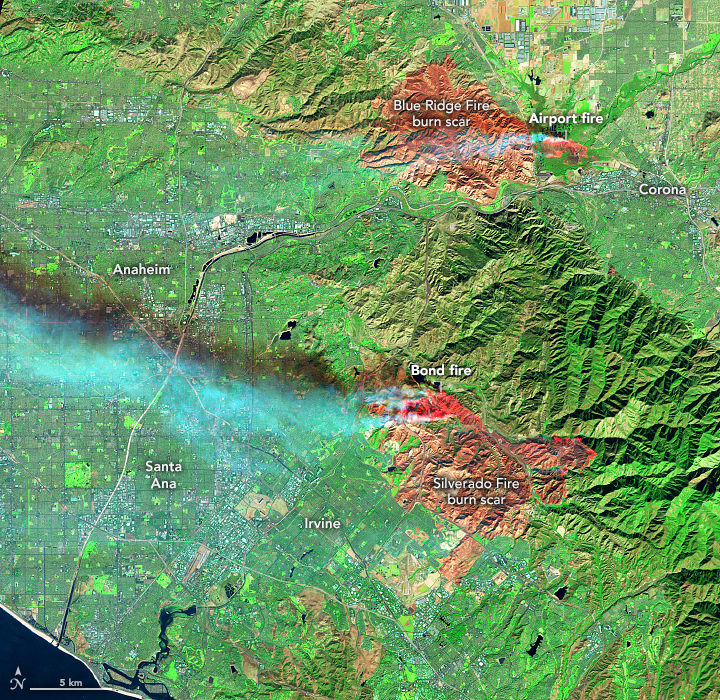 Fire season in California generally peaks from May through October. But as global temperatures have risen, so too has the state’s risk for fall season fires.

These images show late-autumn fires burning southeast of Los Angeles, alongside the scars of fires from earlier this year. Both images were acquired on December 3, 2020, with the Operational Land Imager (OLI) on the Landsat 8 satellite.

The Airport fire ignited on December 1 near an airport and the city of Corona. By December 3, the fire had burned 750 acres and was 10 percent contained.

A second, more widespread fire in the Silverado Canyon area of Orange County ignited on December 2, 2020. Orange County Fire Authority officials estimated that the Bond fire had burned 7,200 acres as of December 3. That number was revised the next day to 6,400 acres as smoke- and fire-mapping technology allowed fire managers to make a more accurate assessment. Evacuation orders were lifted in some areas on December 4, but remained in effect for about 20,000 people.

The first (left) image above is a natural-color view (OLI bands 4 ,3, 2) that highlights the smoke from actively burning fires. The second image is false-color, combining shortwave infrared, near-infrared, and red light (OLI bands 7, 5, 4). This combination is better for showing the location of active fires (bright red). Intact vegetation is green, and cities and infrastructure are gray. The band combination also does a better job of cutting through the smoke to reveal the burn scars from previous fires (muted red-brown).

Despite the previous fires, enough brush and vegetation remains nearby to fuel the new fires. Strong Santa Ana winds—with gusts measuring between 70 and 95 miles per hour on December 2–3—helped push the flames into new areas of dry vegetation. The winds died down somewhat by December 4, but dangerous fire weather conditions remained. Fire managers are working to increase containment while winds are relatively calm; forecasts call for strong winds to return next week.

The December fires are the latest episodes in what has been a brutal fire season for California and much of the U.S. West. Cal Fire reported that fires have scorched more than 1.4 million acres in California since the beginning of the year. (The five-year average for the same interval is just over 0.4 million acres.) Five of the state’s six largest fires on record have occurred in 2020. 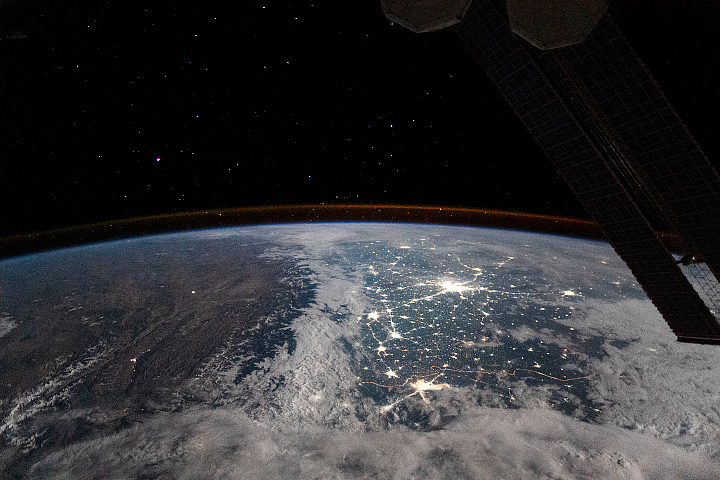