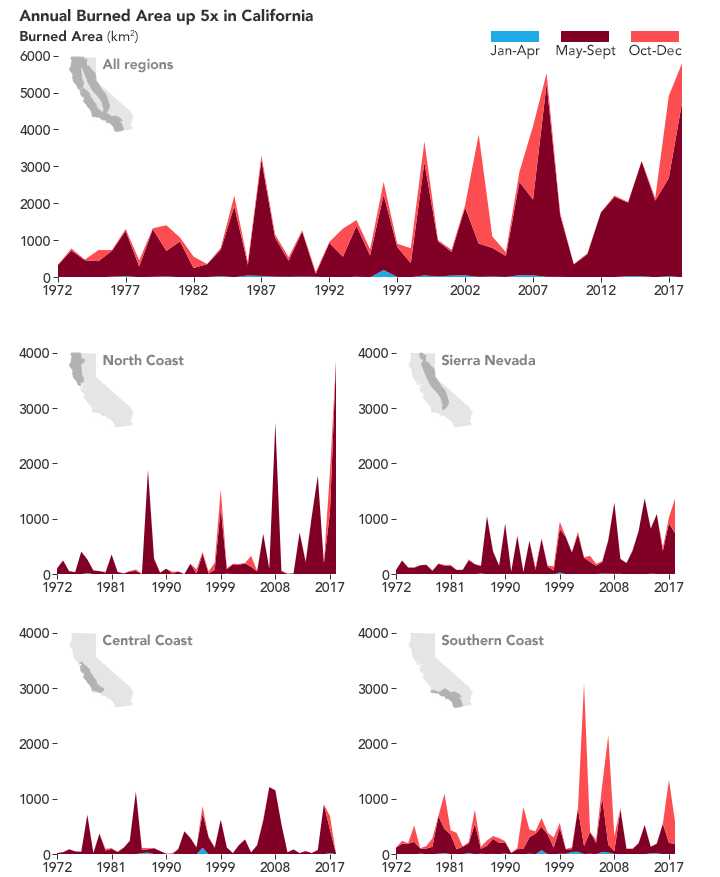 If it seems like California has been getting hit by more and larger fires lately, that's because it has. In 2017, California endured the Thomas Fire, the state’s largest fire (by area) at that time. One year later, the Mendocino Fire Complex took its place. In 2018, California also suffered its most destructive fire ever and set a new record for burned area in one year.

A study published in July 2019 shows these remarkable fire years are no longer freakish anomalies. They fit with a trend of more frequent and bigger fires. According to the researchers, the annual burned area across California has increased fivefold over the past five decades, and the main driver is higher temperatures.

“Warming is affecting forest fire,” said Park Williams, lead author and a researcher from Columbia University. “But in California, the story is bound to be really complicated because there are a lot of different climate types, vegetation types, and different ways humans are interacting with the landscape.”

The burned area data came from CalFire Fire Resource and Assessment Program and the Monitoring Trends in Burn Severity dataset, which includes Landsat observations. Using climate models, the team then correlated the burned area with data on monthly precipitation, temperatures, humidity, wind speed, and solar radiation. (Much of this data was derived from NOAA and NASA observations).

The scientists found that the greatest increases in burned area occurred during the summertime (May-September), and particularly in the forests of the North Coast and Sierra Nevada regions. Overall, burned area from summertime forest fires increased by eightfold over the past five decades. “Essentially all of the increase we’ve seen in annual wildfire area in California over the last 50 years is driven by warming in the atmosphere during summertime,” said Williams.

Specifically, the team found the strongest relationship between summer forest fires and the aridity of the atmosphere—a combination of heat and the absence of water vapor. That is not to say other non-climate factors are not important, said Williams. In fact, human activities have probably strengthened the effect of warming in some areas. “By fighting fires and living in forests, humans have increased the vegetation available to burn and the sparks needed to start fires,” said Williams, “so now more than ever the table is set for big fire as soon as hot and dry conditions arrive.” 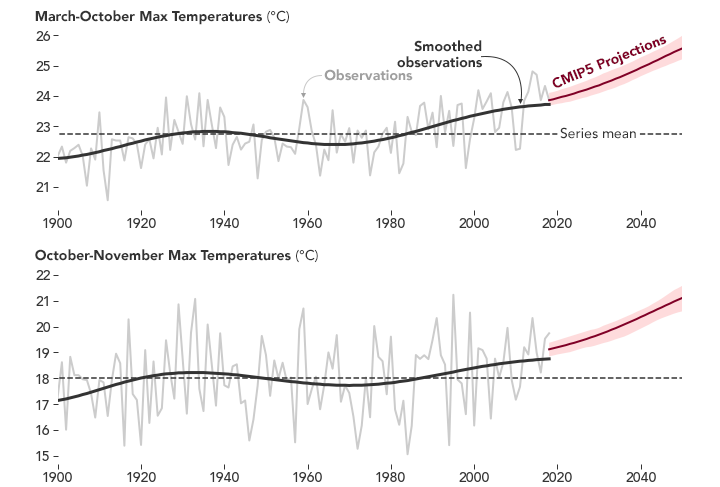 The plots above show the maximum temperatures from March to October and October to November, averaged across the four California study regions. From 1896 to 2018, the maximum temperature for March to October increased by 1.81°C, which corresponded to a 13 percent increase in vapor pressure deficit (the amount of water missing from the atmosphere). These observed trends match expected trends from climate models responding to anthropogenic (human-caused) emissions. Over the same period, the maximum temperature for October to November increased by 1.67°C, which corresponded to an increase of vapor pressure deficit of 14 percent. Both plots show the future expected temperature trends for the region based on the climate model, Coupled Model Intercomparison Project (CMIP5).

Fall wildfires also evolved. Although fewer fires occur in that season, they tend to be more dramatic now. (The Camp Fire is a prime example.) Unlike summertime forest fires, the severity of fall fire season is influenced by the timing (regular or late arrival) of winter rains and by strong Santa Ana wind events (to fan and spread flames), neither of which showed a significant increase. But if the winds are strong and rains are late, then the extra warming helps create destructive fires.

“Even though rain and the winds haven't changed by our calculations, the fall fire risk has actually increased,” said Williams. “When you get into fall, that's when vegetation is driest because it has not rained since spring. It is also warmer by about 1.5°C than it was century ago. That means fuels are drier today than they were a century ago.”

Outside of the forested areas of California, wildfire area has not significantly increased since 1972. Williams noted that grasslands and coastal chaparral are usually already hot, so they are not as sensitive to the extra heat from global warming. Instead, the likelihood for a large fire in such areas depends on the amount of fuel available. For instance, is there enough grass from spring and early summer growth to carry a fire across long distances? As a result, grasslands and chaparral fires tend to occur after a wet winter combined with a dry summer.

“Anytime we hear a one-size-fits-all story for what’s driving the big fires in California, we are not getting the whole story because California is so big,” said Williams. “There are different factors depending on the region and time, and there’s not going to be one solution to fix every fire problem.”