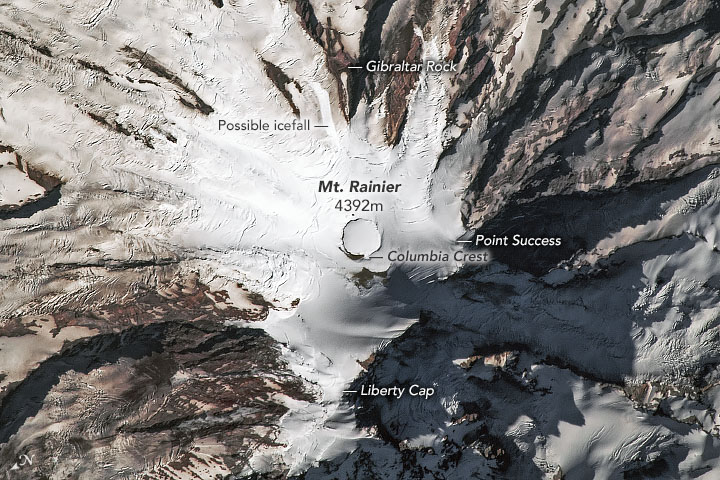 Visit Seattle and you might hear a local declare “the mountain is out!” The phrase refers to Mount Rainier, situated 60 miles (95 kilometers) south-southeast of the city. On a clear day, the majestic volcano dominates the horizon. It is an iconic backdrop of the Puget Sound region.

But the Pacific Northwest is also known for its cloudy days and rain. That’s why people in the region notice when the “mountain is out.” An astronaut noticed, too, snapping this photograph from aboard the International Space Station (ISS) on a clear day in July 2018.

Mount Rainier is the tallest mountain in the Cascade Range, standing 14,410 feet (4,392 meters) above sea level. Viewed from the side, its highest point might appear to be Point Success, Liberty Gap, or the crater rim. The nadir view, however, gives a clear view of Columbia Crest—a small mound of snow north of the crater rim, and the mountain’s true highest point.

The nadir perspective also provides a clear view of the volcano’s crater. Black rocks ring the snow- and ice-filled crater, which measures more than 1,000 feet (300 meters) across. This clearly defined crater is ringed by a second, less distinct crater.

With 25 named glaciers flowing down its flanks and patches of perennial snow, the mountain stays white year-round. In some areas, ice is forced around huge, long walls of rock known as “cleavers”; one of the most prominent is Gilbraltar Rock. Scientists have documented the gradual loss of the mountain’s perennial ice, which lost almost 2 percent of its area between 2009 and 2015.

Not all changes are gradual. Just two days before this photograph was acquired, an icefall on Ingraham Glacier sent blocks of ice and rubble careening down 1,000 vertical feet (300 meters) along a popular climbing route. The event, large enough to be detected on seismographs, occurred at night and no climbers were injured.

The modern mountain is the result of about half a million years of growth amid periods of volcanic activity. Cascade Range volcanoes, including Mount Rainier, are the result of oceanic crust sinking below North America, causing the release of water and melted rock. During the past 2600 years the mountain has erupted about a dozen times, the largest of which occurred about 2200 years ago. Small summit explosions were last reported in 1894, but have not been confirmed.

Astronaut photograph ISS056-E-85160 was acquired on July 8, 2018, with a Nikon D5 digital camera using an 160 millimeter lens and is provided by the ISS Crew Earth Observations Facility and the Earth Science and Remote Sensing Unit, Johnson Space Center. The image was taken by a member of the Expedition 56 crew. The image has been cropped and enhanced to improve contrast, and lens artifacts have been removed. The International Space Station Program supports the laboratory as part of the ISS National Lab to help astronauts take pictures of Earth that will be of the greatest value to scientists and the public, and to make those images freely available on the Internet. Additional images taken by astronauts and cosmonauts can be viewed at the NASA/JSC Gateway to Astronaut Photography of Earth. Story by Kathryn Hansen. 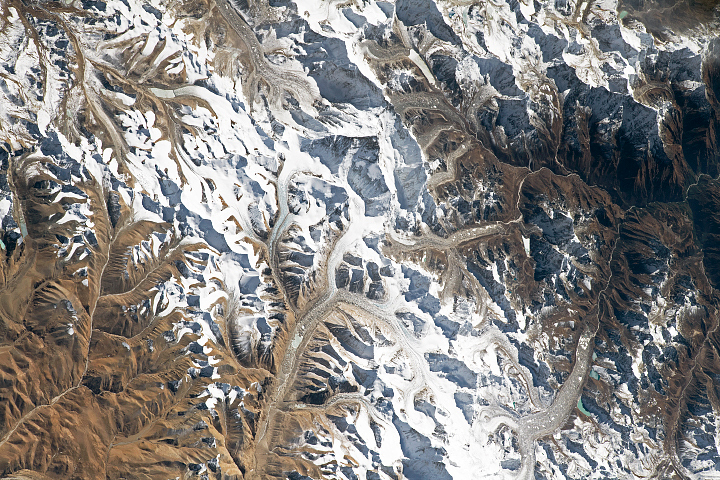 The highest mountain on Earth takes on a different perspective from the vantage point of space. 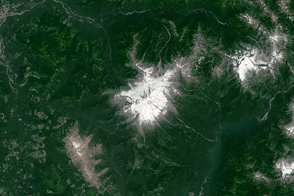