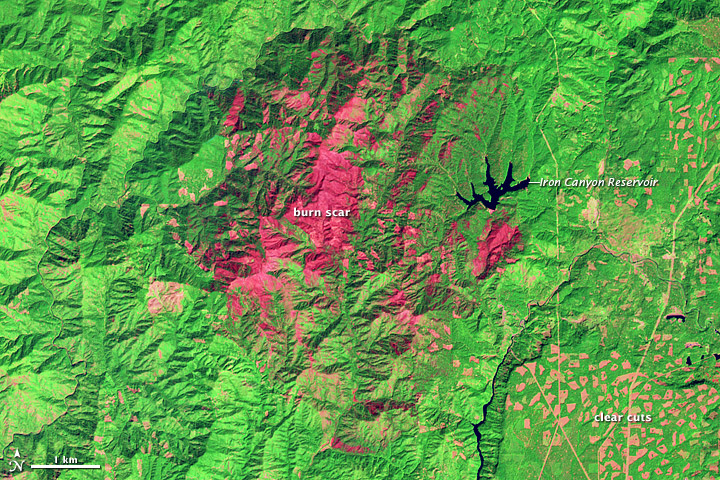 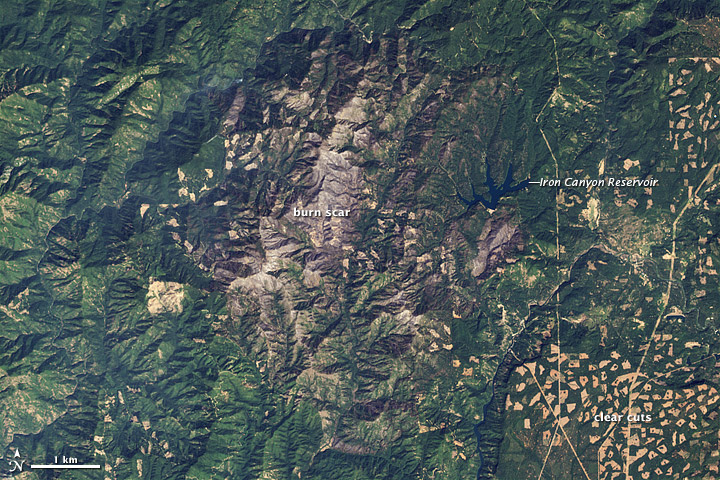 The Advanced Land Imager (ALI) on the Earth Observing-1 (EO-1) satellite acquired these images of the affected area on September 11, 2012. Burned vegetation appears red in the false-color image (top); unburned areas are green. The most severe burning occurred a few kilometers west of Iron Canyon Reservoir. In both the false-colour and the natural-color image (bottom), clearcutting of forests for timber left the checkered pattern on the lower right.

Wildfires had burned a total of 8,561,803 acres (3,464,838 hectares) in the United States by September 17, 2012; about 10 percent of the burning had occurred in California. The 2012 wildfire season in the United States will likely break the record for the most acres burned in a single year since 1960, the year that statistics published by the National Interagency Fire Center begin. In 2006—the season that currently holds the record—9,873,745 acres burned.

The size and frequency of wildfires has increased significantly in the western United States over the last few decades due largely to climate change and changing forestry practices. Climate change has decreased winter snow cover, hastened the arrival of spring, and intensified heat waves in the region—all factors that exacerbate wildfires.

Meanwhile, decades of aggressive fire suppression and tree planting after timber harvesting have left denser forests and abundant fuel on the ground that cause fires to spread easily. Despite the increase in the number of fires and the number of acres burned, one study published in 2012 concluded that the severity of the region’s fires (a measure of the percentage of tree canopy that fires kill) had not increased.