Lighting the Edge of the Roof 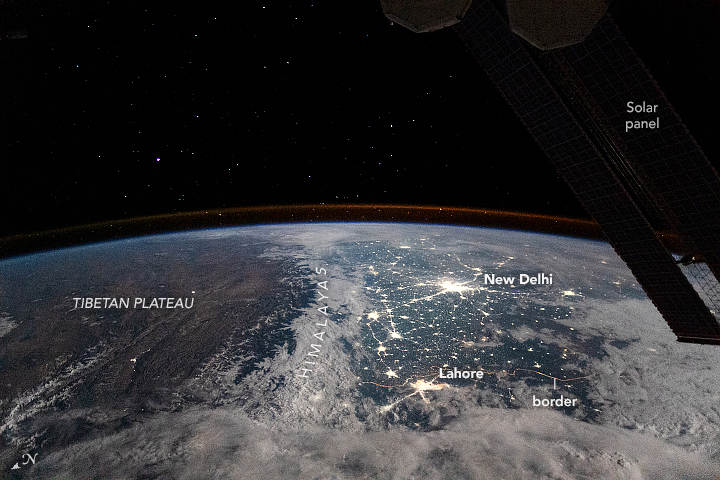 A sharp contrast in nighttime light density distinguishes the sparsely populated Tibetan Plateau—the “Roof of the World”—from the fertile and densely inhabited Indo-Gangetic plain of Northern India and Pakistan. These regions are not only visually distinct from an astronaut’s view; they are physically separated by the Himalayan mountain range. The geography and population dynamics in this region are one legacy of the ongoing orogeny, or collision, of the Indian and Eurasian tectonic plates.

South of the Himalayas, the cities of New Delhi, India, and Lahore, Pakistan, stand out among the network of cities on the plain. This region—enriched with alluvial deposits that are delivered by the Indus and the Ganges rivers—is agriculturally fertile and has long been home to highly-concentrated human settlements. Today, it is home to more than 400 million people and one of the most densely populated regions on Earth. For astronauts, this is also one of the few areas where geopolitical boundaries come to life at night, as orange security lights make clear the international border between India and Pakistan.

On the other side of the Himalayas, tectonic forces have worked for about 50 million years to elevate the Tibetan plateau to an average of 4500 meters (14,764 feet) above sea level. The plateau is home to numerous glaciers that collectively add up to the third largest ice mass on Earth (after the polar ice sheets). Unlike the plain to the south of the Himalayas, the high-altitude conditions and harsh climate on the plateau are not conducive to extensive agriculture or human settlements. The people who do inhabit the plateau primarily practice pastoral nomadism or grow cold-adaptive crops like barley.

Astronaut photograph ISS063-E-81395 was acquired on August 31, 2020, with a Nikon D5 digital camera using a 28 millimeter lens and is provided by the ISS Crew Earth Observations Facility and the Earth Science and Remote Sensing Unit, Johnson Space Center. The image was taken by a member of the Expedition 63 crew. The image has been cropped and enhanced to improve contrast, and lens artifacts have been removed. The International Space Station Program supports the laboratory as part of the ISS National Lab to help astronauts take pictures of Earth that will be of the greatest value to scientists and the public, and to make those images freely available on the Internet. Additional images taken by astronauts and cosmonauts can be viewed at the NASA/JSC Gateway to Astronaut Photography of Earth. Caption by Alex Stoken, Jacobs, JETS Contract at NASA-JSC.

A sharp contrast in nighttime lights distinguishes the sparsely populated Tibetan Plateau from the fertile and densely inhabited Indo-Gangetic plain. 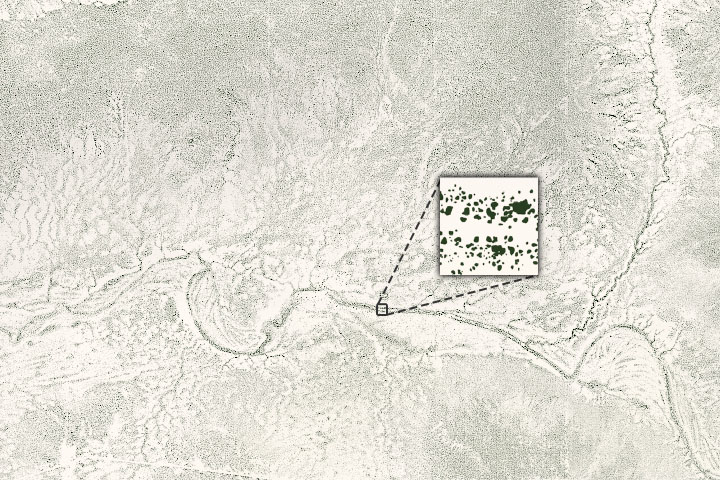