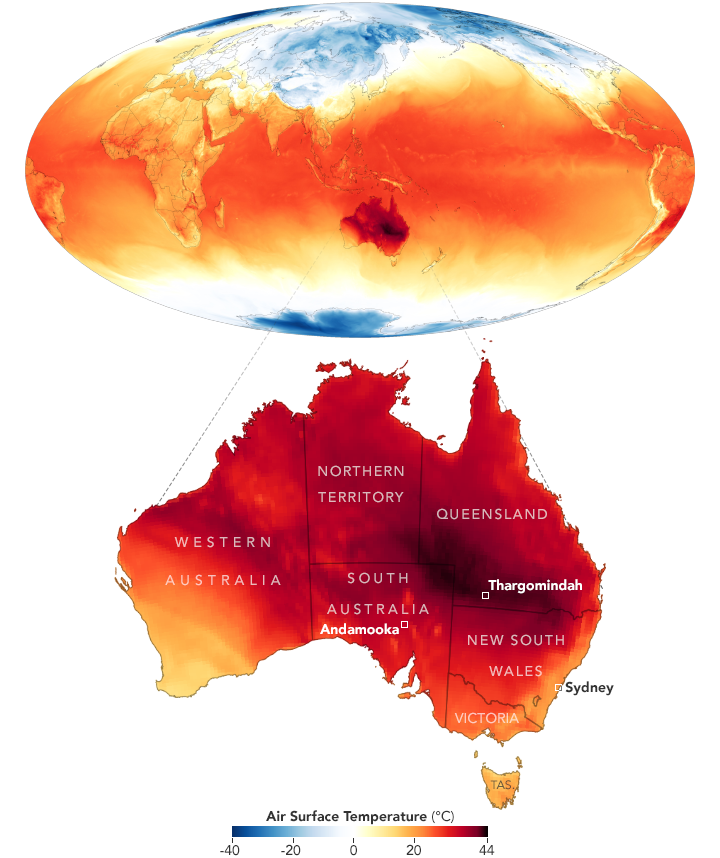 Australia has experienced its warmest spring on record, hitting a mean temperature of 24.53°C (76.15°F), which was 2.03°C above the long-term average. The season began with record warm daily maximum and minimum temperatures in early September and finished with an intense heat wave at the end of November. The Australian Bureau of Meteorology (BOM) declared November 2020 the warmest November on record.

The map above shows air temperatures across Australia for November 30, 2020. The map was derived from the Goddard Earth Observing System (GEOS) model and depicts air temperatures at 2 meters (about 6.5 feet) above the ground. The darkest red areas are where the model shows temperatures surpassing 40°C (104°F). The GEOS model, like all weather and climate models, uses mathematical equations that represent physical processes (such as precipitation and cloud processes) to calculate what the atmosphere will do. Actual measurements of physical properties, like temperature, moisture, and winds, are routinely folded into the model to keep the simulation as close to observed reality as possible.

Temperatures were warm throughout November and then broke records during an intense heat wave from November 28-30. At least 20 ground stations across New South Wales, South Australia, Victoria, and Queensland recorded their hottest November days in three decades. Thargomindah Airport in Queensland broke November records hitting 46°C (114°F) on November 30. Temperatures in the town of Andamooka, South Australia, reached an all-time high for the spring at 48°C (118°F) on November 28. Temperatures in Smithville hit 46.9°C (116°F) on November 28, which was the highest spring temperature ever recorded in New South Wales. Sydney also experienced back-to-back days with temperatures above 40°C (104°F)—only the second time that has happened in the city in November in 162 years.

The BOM reported that the heat wave was a result of warm air getting pushed from the middle of the continent into southeastern and eastern Australia as frontal systems combined with a heat trough over central Australia. Several locations also experienced record-breaking warm nighttime temperatures, which exacerbated the heat wave. The nighttime heat prevented areas from cooling off and bringing the average temperature down; this also made it easier for temperatures to climb the next day. Average nighttime temperatures in New South Wales were 1.99°C (3.58°F) above the state mean minimum temperature—the warmest since 1914.

Spring rainfall was also about 8 percent below average for the country as a whole, although the anomalies varied through the season. For instance, October was wetter-than-normal due to La Niña strengthening in the tropical Pacific Ocean. According to the BOM, La Niña typically brings cooler, cloudier, and wetter than average conditions for the country. During November, the La Niña conditions temporarily weakened in the region. The BOM expects the pattern to strengthen again and bring cooler temperatures and more rainfall for the summer. 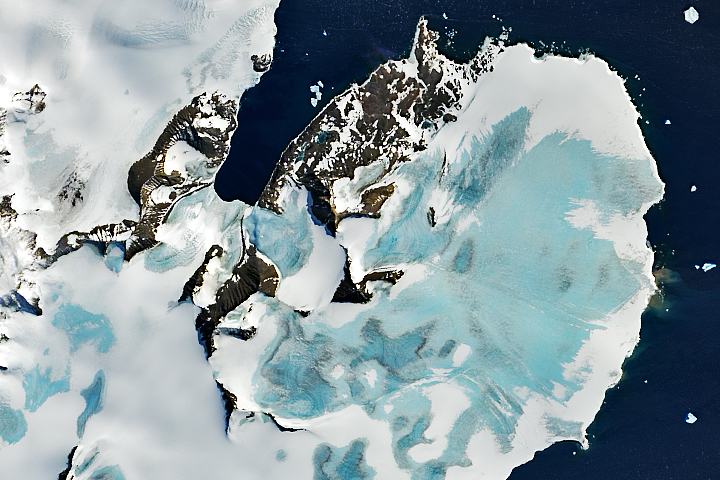