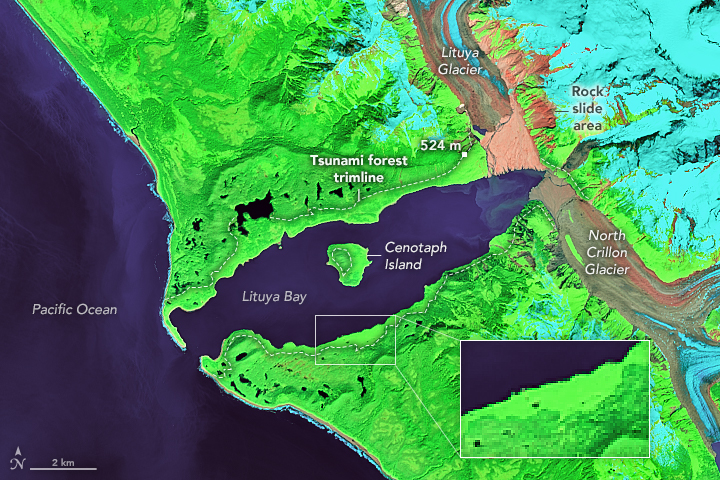 When he first encountered Lituya Bay in 1786, the French explorer Jean-François de Galaup La Pérouse was intrigued by an odd line in the forests that surrounded the narrow fjord in southeastern Alaska. It was as though the forests “had been cut cleanly with a razor blade,” he noted in his log.

It was the first clue that the seemingly placid, protected waters of the bay had a more destructive side. Another came when he dispatched three small boats to measure the depth of the water near the entrance of the bay. Despite the weather being calm, two of the three boats capsized after being drawn into roiling tidal currents that had been amplified by the fjord’s narrow shape. Twenty-six men lost their lives, their remains never to be found. It was in their honor that the lone island in the bay was given the name Cenotaph, a Greek word meaning “empty tomb.”

The name turned out to be all too fitting. In 1899, an earthquake triggered a giant wave that destroyed a native village and drowned 5 people on the island. Another tsunami wave hit in 1936. But it was in 1958 that Lituya Bay’s unpredictable waters reared up in truly apocalyptic fashion. After a 7.8 earthquake throttled the nearby Fairweather Fault, a rockslide sent 90 million tons of rock plunging into the bay—an amount equivalent to 8 million dump truck loads. 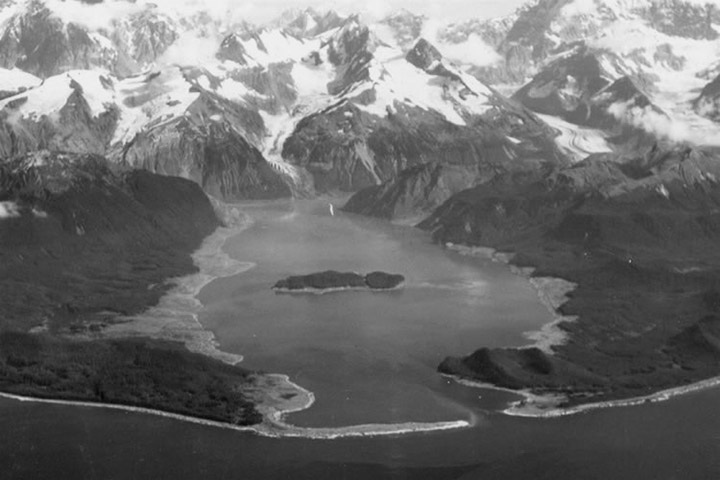 Eyewitness reports describe a chaotic and surreal scene: Intense shaking for several minutes, an explosive boom, and a shattered glacier soaring hundreds of feet into the air. Then a series of giant waves dotted with hunks of ice raced through the bay. One fisherman described his boat being lofted over a forested spit on the crest of one wave and looking down at trees below. The wave obliterated a cabin on Cenotaph island and swept away a lighthouse near the mouth of the bay. One couple that had been fishing when the wave hit were never heard from again.

The damage line in the forest—geologists call it a trimline—generally extended to an elevation of 700 feet (200 meters) around much of the bay. On one ridge opposite the slide, waves splashed up to an elevation of 1,720 feet (524 meters)—taller than New York’s Empire State Building. The event at Lituya Bay still stands as one of the tallest tsunami waves known to science. The photo above, taken in 1958 after the tsunami, shows the ring of damage around much of the bay.

Evidence of the cataclysmic wave is still visible from space more than 60 years later. As seen in the false-color Landsat 8 image (bands 7-5-3) at the top of the page, the damaged trimline is still imprinted in the forest. The lighter green areas along the shore indicate places where forests are younger than older trees (darker areas) that were not affected by the tsunami. When the tsunami hit, it snapped all of the trees and scoured away almost all vegetation. Some 2 square miles (4 square kilometers) of forest were sheared and swept away by the tsunami waves. 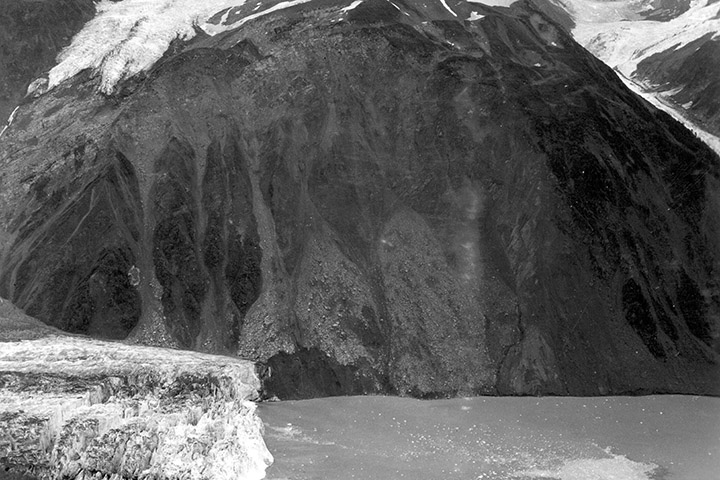 One of the causes of the enormous waves in Lituya Bay was that an entire chunk of a mountain peak—estimated to be 2,400 feet by 3,000 feet by 300 feet—broke free from a cliff and dropped 2,000 feet. “In some respects, it created a similar reaction to that which would have occurred if an asteroid had fallen into the water,” said the authors of a summary from the Western States Seismic Policy Council. The photo above, taken in 1958, shows the scar left behind after the rock slide. After the initial blast, Lituya Bay’s narrow shape and U-shaped seafloor also amplified the waves, causing them to slosh back and forth like swells in a huge bath tub.

Lituya Bay’s steep walls, the geometry of its seafloor, and the fact that it intersects a fault that is often a source of earthquakes suggests that Lituya Bay will see more tsunamis in the future. After scrutinizing the bay’s geology and history for years, one scientist calculated giant waves happen there once every quarter century—a 1 in 9000 chance on any given day. The threat from the tidal currents that thwarted La Pérouse is more constant. Since the 1958 wave, an average of one fishing boat has been lost at the entrance of the bay per year, reports Philip Fradkin in the book, Wildest Alaska: Journeys of Great Peril in Lituya Bay.

NASA Earth Observatory image by Lauren Dauphin, using Landsat data from the U.S. Geological Survey. Aerial photos of Lituya Bay and the source of the rockslide by Don Miller for the USGS. Story by Adam Voiland.

One of the tallest tsunami waves known to science slammed this Alaskan bay in 1958. 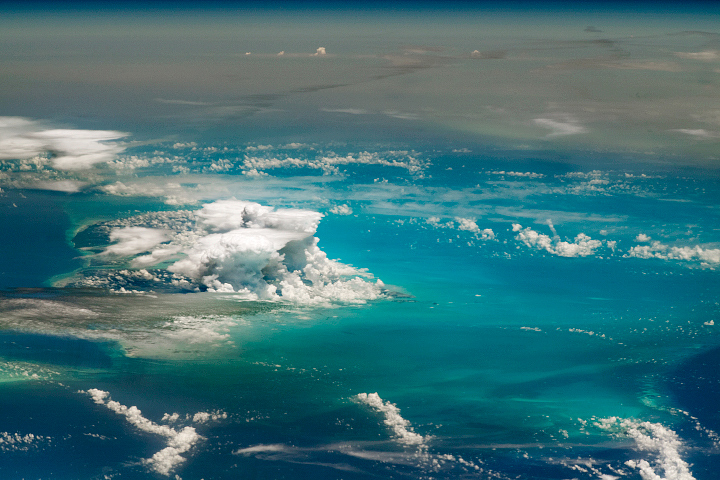 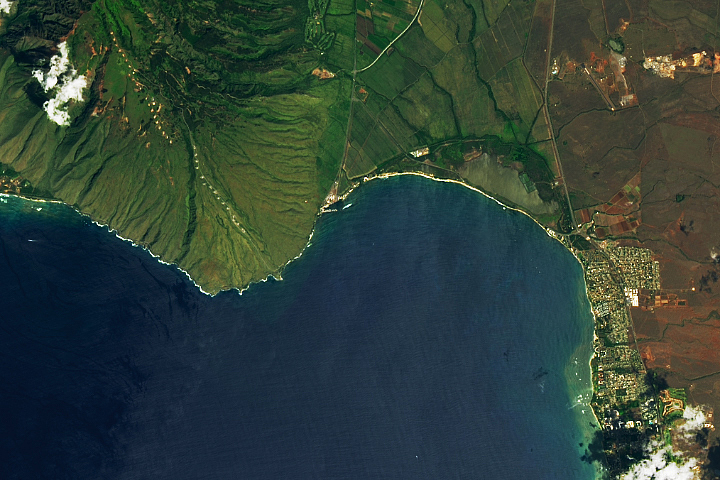