A joint U.S.-European satellite, built to monitor global sea levels, lifted off on a SpaceX Falcon 9 rocket from Vandenberg Air Force Base just after 9 a.m. Pacific Time on November 21, 2020. About the size of a small pickup truck, Sentinel-6 Michael Freilich will extend a nearly 30-year continuous dataset on sea surface height.

The satellite’s principal instrument is a radar altimeter, which monitors the height and shape of the ocean’s peaks and valleys—known to scientists as ocean surface topography. Radar altimeters continually send out pulses of radio waves (microwaves) that bounce off the surface of the ocean and reflect back toward the satellite. The instrument calculates the time it takes for the signal to return, while also tracking the precise location of the satellite in space. From this, scientists can derive the height of the sea surface directly underneath the satellite.

Sentinel-6 Michael Freilich will continue a sea level record that began in 1992 with the TOPEX/Poseidon satellite and continued with Jason-1 (2001), OSTM/Jason-2 (2008), and Jason-3 (2016). Together, these satellites have provided long-term, precise measurements of sea level height while tracking the rate at which our oceans are rising in response to global warming. Sentinel-6 Michael Freilich will eventually pass the baton to its twin, Sentinel-6B, scheduled for launch in 2025.

“Together, these satellites will let us keep measuring global sea levels for another full decade,” said Josh Willis, the NASA Project Scientist for the mission and an ocean scientist at NASA’s Jet Propulsion Laboratory. “It is the first time we have been able to launch one of these while its predecessor is still young. Jason-3 is still within its design life, and that is a big deal for us because to keep the record accurate when it gets handed off from one satellite to the next, we really need them overlap so we can cross-calibrate.”

The time-lapse video above shows the plume of exhaust from the Falcon 9 in the 25 minutes after the rocket launched from California. The images were acquired with the Advanced Baseline Imager (band 2/red) on GOES-17. The satellite is operated by the National Oceanic and Atmospheric Administration (NOAA), and NASA helps develop and launch the GOES series.

The spacecraft is named in honor of Michael Freilich, the former director of NASA’s Earth Science Division and a leader in advancing ocean observations from space. Freilich retired in 2019 and passed away on August 5, 2020. His close family and friends attended the launch of the satellite that now carries his name.

“Michael was a tireless force in Earth sciences. Climate change and sea level rise know no national borders, and he championed international collaboration to confront the challenge,” said Josef Aschbacher, the director of Earth observation programmes for the European Space Agency (ESA). “It is fitting that a satellite in his name will continue the ‘gold standard’ of sea level measurements for the next half-decade.”

“The Earth is changing, and this satellite will help deepen our understanding of how,” said Karen St. Germain, director of NASA’s Earth Science Division. “Changing Earth processes are affecting sea level globally, but the impact on local communities varies widely. International collaboration is critical to both understanding these changes and informing coastal communities around the world.”

After arriving in orbit, the spacecraft separated from the rocket’s second stage and unfolded its twin sets of solar arrays. Ground controllers successfully acquired the satellite's signal, and initial telemetry reports showed the spacecraft is in good health. Sentinel-6 Michael Freilich will now undergo a series of exhaustive checks and calibrations before it starts collecting science data in a few months.

The initial orbit of Sentinel-6 Michael Freilich is about 20 kilometers (12 miles) lower than its ultimate operational orbit of 1,336 kilometers (830 miles). In about a month, the satellite will receive commands to raise its orbit, trailing Jason-3 by about 30 seconds. Mission scientists and engineers will then spend about a year cross-calibrating the data collected by the two satellites. Sentinel-6 Michael Freilich will then take over as the primary sea level satellite and Jason-3 will provide a supporting role until the end of its mission. Scientific instruments on both satellites will also make atmospheric measurements that can be used to complement climate models and help meteorologists make better weather forecasts.

To learn more about sea surface height and the long international collaboration to study it, read Taking a Measure of Sea Level Rise: Ocean Altimetry. 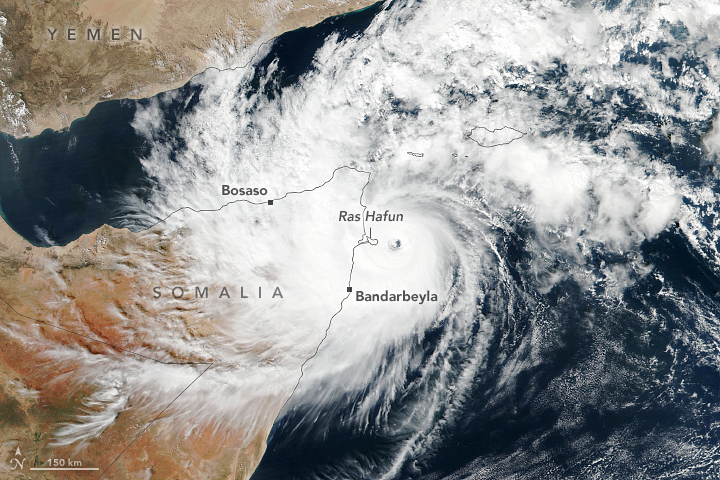