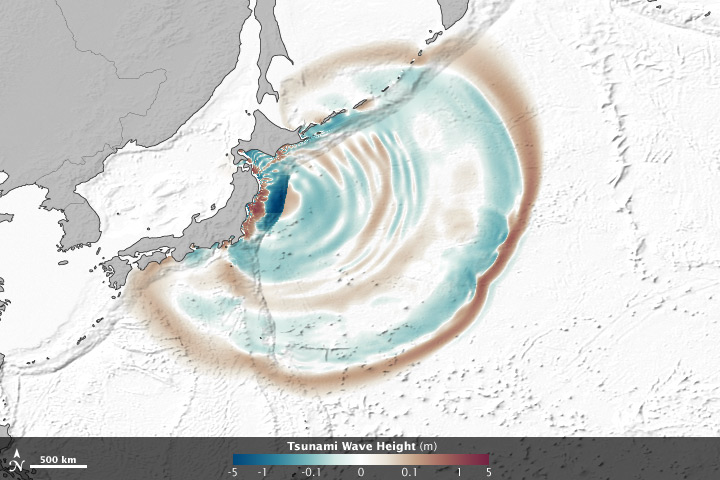 Scientists have known for years that the shape of the seafloor plays a role in how tsunami waves build up as they approach the coastline. Underwater topography also determines why some areas get hit worse than others.

But in the wake of the Tohoku-oki tsunami, scientists now know that seafloor topography affects the strength and height of a tsunami even in the deep ocean and at great distances from the genesis of the wave. Scientists had suspected that underwater mountains and chasms, as well as islands, played a role in deflecting tsunami waves in some places and amplifying them up in others. But it was not until three satellites passed over such waves in March 2011 that they could confirm it.

The image above comes from a data-based computer model that shows how the waves can refract, bend, and merge as they propagate. Waves peaks are depicted in red-brown, while depressions in sea surface appear in blue-green. Grayscale outlines show the location of mid-ocean ridges, peaks, and islands. You can also view the animated model, which reveals the motion across the Pacific basin.

The team examined measurements of the wave fronts as gathered by the Jason-1, Jason-2, and Envisat satellites, each of which flew over the tsunami at a different location. Altimeters on each satellite measure sea level changes to an accuracy of a few centimeters. They found that the March 2011 tsunami doubled in intensity when passing over rugged ocean ridges and around islands in the middle of the Pacific Ocean. They verified their satellite observations by comparing with data from Global Positioning System (GPS) sensors and buoy data from the National Oceanic and Atmospheric Administration’s Deep-ocean Assessment and Reporting of Tsunamis (DART) program.

“It was a one in ten million chance that we were able to observe this double wave with satellites,” said Tony Song, principal investigator of the study and a scientist at JPL. “Researchers have suspected for decades that such ‘merging tsunamis’ might have been responsible for the 1960 Chilean tsunami that killed about 200 people in Japan and Hawaii, but nobody had definitively observed a merging tsunami until now. It was like looking for a ghost. Jason happened to be in the right place at the right time to capture the double wave.”