A Meeting of Smoke and Storms 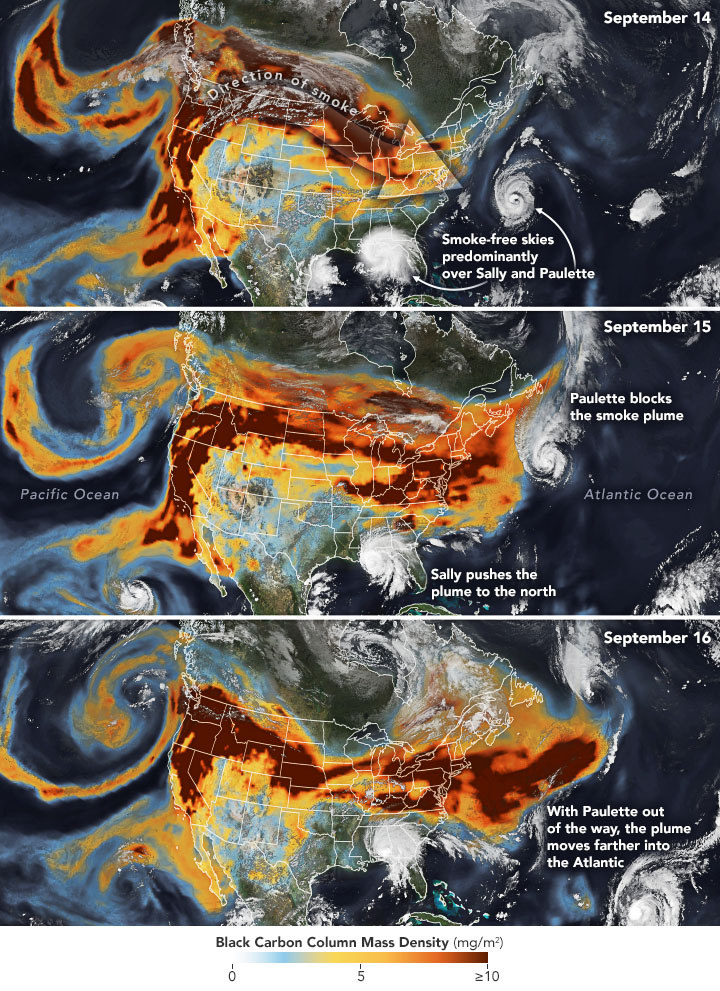 In September 2020, historic wildfires on the U.S. West Coast lofted plumes of smoke high into the atmosphere. Pushed by prevailing winds that sweep air from west to east, satellites tracked the smoke as it spread widely across much of the continental United States. A second hazard—tropical cyclones—also helped steer the high-flying smoke plumes as they streamed over the Midwest and Northeast between September 14-16, 2020.

The series of images above shows the abundance and distribution of black carbon, a type of aerosol found in wildfire smoke, as it rode jet stream winds across the United States. The black carbon data comes from the GEOS forward processing (GEOS-FP) model, which assimilates information from satellite, aircraft, and ground-based observing systems. The Visible Infrared Imaging Radiometer Suite (VIIRS) on the NOAA-NASA Suomi NPP satellite acquired the images of the storms.

As Hurricane Paulette churned in the Atlantic Ocean on September 14, the storm’s circulating winds likely helped keep the skies around the storm mostly clear. By September 15, the smoke had begun to encounter the outer edge of Paulette, whose presence helped steer smoke around the northwestern side of the storm. By September 16, the remnants of Paulette had moved northeast, closer to Newfoundland, clearing the way for the smoke plume to extend eastward unimpeded.

While satellite maps like this show smoke spanning the entire United States, that does not mean the smoke had equally strong effects on air quality at ground level everywhere. While people living in communities near the fires in California and Oregon faced very unhealthy and hazardous air quality between September 14-16, surface air quality in the eastern U.S. remained mostly good. That is because the smoke was traveling high in the atmosphere, explained Santiago Gassó, an atmospheric scientist at NASA’s Goddard Space Flight Center.

Data from a ground-based lidar sensors that are part of NASA’s Micro-Pulse Lidar Network (MPLNET) measured smoke over Greenbelt, Maryland, at a height of 7 to 9 kilometers (4 to 5 miles) on September 14. According to Ryan Stauffer, another atmospheric scientist at Goddard, the smoke layer sank closer to 3 kilometers (2 miles) a few days later as it traveled around a long area of relatively high atmospheric pressure, a meteorological feature known as a ridge.

While layers of smoke can cause atmospheric cooling and have important effects on clouds in some circumstances, meteorologists do not think the smoke had much of an impact on Hurricane Paulette. Hurricanes derive most of their energy from the sea and the lower atmosphere, but in Paulette’s case the smoke layer was likely too high to influence the storm’s energy source much.

“We can’t completely rule out an impact, but given the extratropical transition of Paulette that was also happening, any impact from the smoke would have been quite small,” said Scott Braun, a research meteorologist at Goddard. “If the smoke had been at low levels, there probably would have been an impact—possibly a weakening of the storm,” he said.

Satellites tracked smoke from wildfires as it spanned the continental United States and followed winds around two hurricanes.