When Wildfire Smoke and Thunderstorms Collide 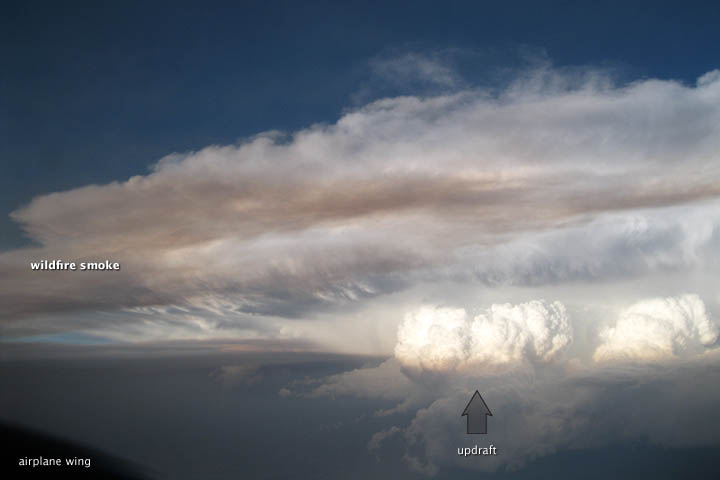 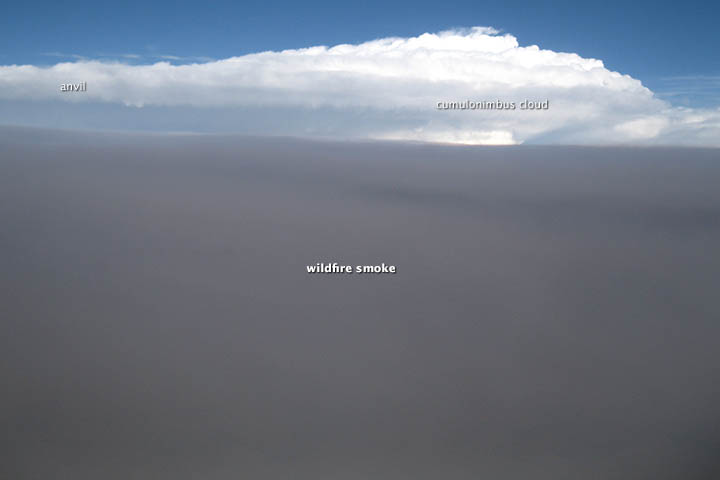 Scientists on NASA’s DC-8, a flying laboratory, have concluded a six-week hunt for thunderstorms.

They were part of a team of 100 researchers from 29 organizations who participated in Deep Convective Clouds and Chemistry (DC3), a field campaign based in Kansas that conducted numerous research flights to Alabama, Colorado, and Oklahoma as part of a campaign to understand how storms affect the chemistry of the upper troposphere. The preferred target: large multicell and supercell storms with powerful updrafts capable of lofting volatile pollutants and moisture-rich air nearly 40,000 feet (12,000 meters) up in the atmosphere, a height that pollutants don’t normally reach without a boost from a storm.

On June 22, 2012, during a flight that proved to be one of the highlights of the campaign, the research team found just the sort of meteorological conditions they had been hoping for developing in northeastern Colorado. The High Park fire, a fast-spreading blaze that ignited on June 9 and was still burning, had sent a plume of smoke billowing northeast toward Wyoming. Meanwhile, a pair of strong storms had emerged in the path of the smoke. At times, it looked like the storms might pass north of the smoke plume, but satellite imagery showed the plume heading straight for the storms during the middle of the flight.

According to a summary of the flight posted on the campaign’s website, the DC-8 took samples near the base of the storm and then spiraled upward toward the storm’s anvil, flying through a thick layer of smoke at around 24,000 feet. The images above, photographs taken by Langley Research Center scientist James Crawford as the plane neared the smoke layer, show the smoke encountering the heart of the storm.

The top image shows the smoke layer being partially ingested by an area of strong convection at the storm’s center, a region where the pull of convection can suck pollutants upward at speeds up to 100 miles (160 kilometers) per hour. The lower image shows a closer view of the same smoke layer. Beyond the smoke layer, the distinctive anvil shape of the cumulonimbus cloud is apparent.

Numerous instruments aboard the DC-8 were sampling various particles and gases throughout the flight, and they detected extremely high values of carbon monoxide and formaldehyde, pollutants produced by wildfires. While the DC-8 was sampling inflow near the base of the storm, the National Center for Atmospheric Research and National Science Foundation’s Gulfstream-V flew at higher altitudes to sample the storm’s outflow. Its sensors detected remnants of smoke up as high as 37,000 feet, suggesting the storm had pulled some of the smoke up an extra 13,000 feet.

However, the researchers have only begun to analyze the data collected during this flight—and the 21 others that occurred during this summer’s campaign—in much detail. The final Gulfstream-V flight occurred on June 30, so the detailed work of sifting through all the data and publishing noteworthy findings in scientific journals has really just begun.

Crawford says there’s much scientists can learn from unusual cases like this one. “In that case, it is important to note that the smoke was already at 20,000 to 25,000 feet when it encountered the storm. Thus it had to enter the side rather than the bottom,” Crawford noted via email. “Some [scientists] think that the strong core of convective uplift connects the surface to the upper troposphere, but that it is difficult for smoke and other pollutants to penetrate storms from a middle altitude. When we’ve fully analyzed the data, this example will help us understand how effective transport can be for material entering the cloud at mid-atmospheric levels.”

In June, the High Park fire sent a smoke plume billowing toward thunderstorms in northeastern Colorado. Scientists on NASA’s DC-8 were on hand to witness what happened when the two met.