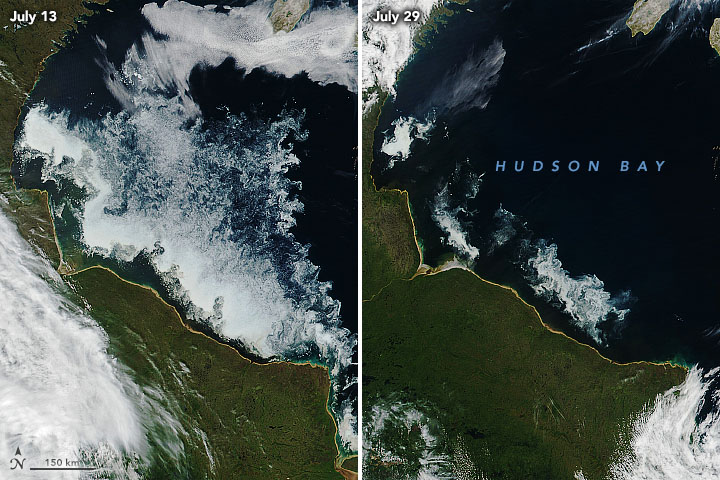 Shallow and surrounded by land—yet considered a sea of the Arctic Ocean—Hudson Bay freezes over completely in the winter and thaws for a period in the summer. Usually all of the sea ice melts between June and August, and the bay begins to freeze over again in October or November.

As the sea ice breaks up, satellites often capture stunning natural-color images of the changing conditions. For instance, the Visible Infrared Imaging Radiometer Suite (VIIRS) on Suomi NPP captured this pair of images highlighting the drawdown of sea ice between July 13 and July 29, 2020. While many parts of the Arctic saw unusually rapid melting and low levels of ice through July 2020, conditions were a bit more hospitable to sea ice in southwestern Hudson Bay.

The distribution and rhythms of the sea ice plays a central role in the lives of the animals of Hudson Bay, especially polar bears. When the bay is topped with ice, polar bears head out to hunt for ringed seals and other prey. When the ice melts in the summer, the bears retreat to shore, where they fast until the ice returns.

For bears, this year was a bit of a throwback. “The dates ashore for the bears this year were much closer to what we saw in the 1980s and 1990s,” said University of Alberta scientist Andrew Derocher. He is part of a research group that monitors Hudson Bay polar bear populations by tracking bears with GPS satellite collars. He noted that several bears were still on the ice in late July, despite how little ice was left. “It was actually surprising how long they stayed offshore. We could be witnessing a shift in their behavior.”

The bears of western Hudson Bay have been under environmental pressure for decades, with the population dropping from 1200 in the 1980s to about 800 now because of declining summer sea ice. The extra hunting time on this ice this summer 2020 may have allowed bears to gain some extra weight, said Derocher. “But one ‘normal’ year doesn’t alter the trends, and it won’t make up for the string of poor ice years these bears have faced in the past few decades.”