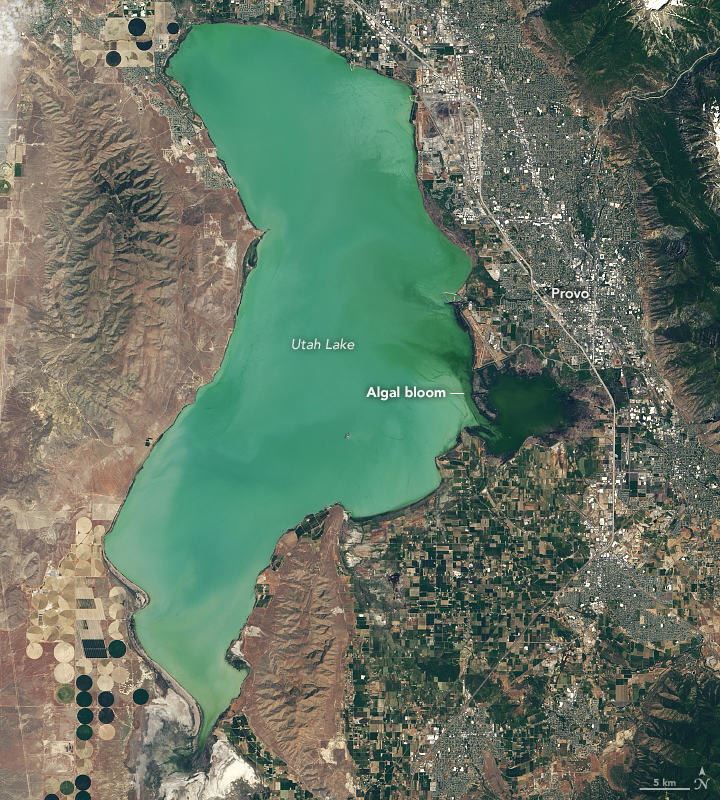 Early detection of harmful algal blooms via satellite can result in significant savings on health care, lost work hours, and other economic costs. That is the finding of a NASA-funded case study published in June 2020 in the journal GeoHealth.

Some species of algae and phytoplankton can be harmful to human health when they are present in high numbers. Such blooms can change the color of lake water in ways that are detectable by Earth-observing satellites. Using a 2017 bloom in Utah Lake as a case study, researchers found that early warnings from a satellite-based monitoring project—warnings that came days earlier than other detection methods—provided a measurable benefit for communities around Provo, Utah.

The image at the top of the page, acquired by the Operational Land Imager on Landsat 8, shows Utah Lake as it appeared in natural color on June 20, 2017. The second map shows the abundance of chlorophyll-a, the sunlight-harvesting pigment in plants and phytoplankton (including algae), on June 21, 2017. Chlorophyll-a measurements increase sharply (green shading in the image) with large blooms of algae and other plant-like organisms in the water. 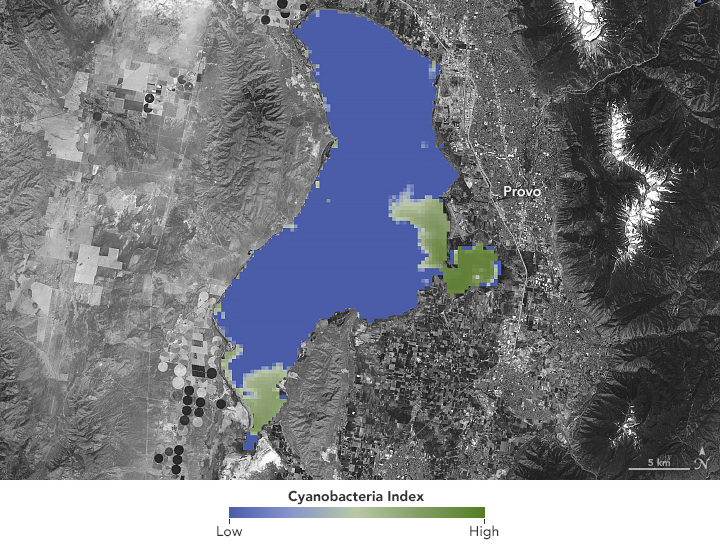 The chlorophyll map is a product of the Cyanobacteria Assessment Network (CyAN), a mulit-agency project that aggregates and analyzes satellite data to detect the presence of certain types of harmful algae in the freshwater lakes and rivers of the United States. The data for the Utah Lake map came from the European Space Agency's Sentinel-3 satellite. CyAN is led by the Environmental Protection Agency and includes NASA, the National Oceanic and Atmospheric Administration, and the U.S. Geological Survey.

For their analysis, economists compared two scenarios of the June 2017 bloom: the real-world event, in which satellites detected algae in mid-June, and a second scenario in which the bloom was detected in more traditional ways.

In June 2017, satellite data showed color changes, and thus the presence of algae, on Utah Lake. Remote sensing scientists informed the Utah Department of Environmental Quality, which then tested the waters for toxic algae earlier than observations on the ground alone would have enabled. This advanced warning allowed Utah public health and environmental officials to post warnings to boaters, swimmers, and fishers on June 29, 2017.

In the second scenario, the Utah Lake bloom was reported by human observers and followed by on-site testing. Water managers then waited for test results and officials deliberated over the need to post warnings. Warnings were finally posted around the lake seven days later (July 6). That delay would have kept the toxic-algae coated lake open to humans and their pets. The study authors then used various health economics models and studies to estimate the costs of that extra exposure to the local community. The advance warning saved an estimated $370,000 for the region.

The case study was part of a larger effort to develop a framework to measure the economic benefits of detecting harmful algal blooms. “Incorporating satellite data into the harmful algal blooms detection strategy for other large U.S. lakes could yield similar benefits,” Robertson said.

The Utah Lake analysis and similar studies are projects of the Consortium for the Valuation of Applications Benefits Linked to Earth Science (VALUABLES), a collaboration between RFF and NASA’s Earth Science Applied Sciences program. It focuses on advancing innovative uses of existing techniques and developing new techniques for valuing the information provided by Earth-observing satellites.