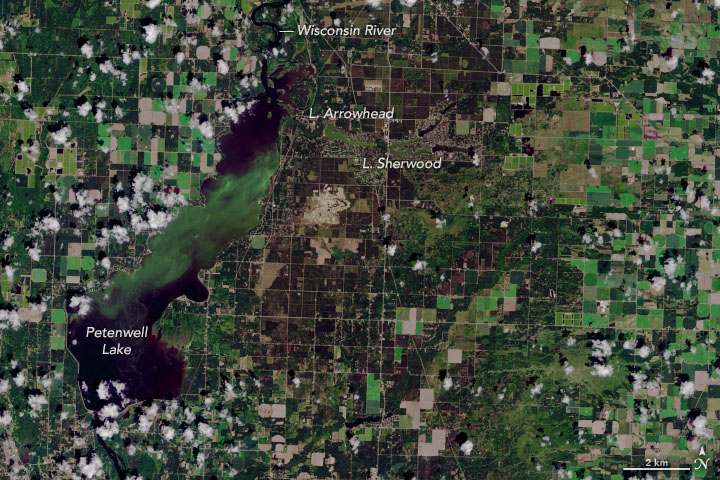 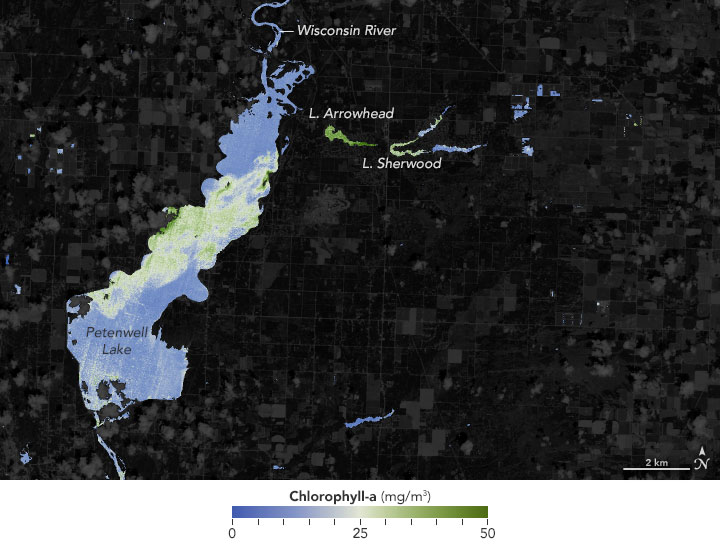 Harmful algal blooms can cause big problems in coastal areas and in lakes across the United States. When toxin-producing phytoplankton and cyanobacteria multiply exponentially and form a bloom, they can sicken people and pets, contaminate drinking water, and force closures of boating and swimming sites. With limited resources to monitor these often-unpredictable blooms, water managers are turning to new technologies to detect and keep track of potential hazards.

A new app for Android mobile devices, developed by the Environmental Protection Agency (EPA) and available on Google play, will alert officials and members of the public when a harmful algal bloom could be forming. The system relies heavily on observations of specific changes in the color of the water as observed by satellites. The app is a product of the multi-agency Cyanobacteria Assessment Network (CyAN), which includes NASA, EPA, the U.S. Geological Survey (USGS), and the National Oceanic and Atmospheric Administration (NOAA).

“The interest is to use remote sensing as an eye-in-the-sky, early warning system to get a picture of harmful cyanobacteria in U.S. inland lakes,” said Jeremy Werdell, the NASA Goddard Space Flight Center lead for CyAN. “Resources are limited, and it’s not possible for everyone on the ground to monitor all inland water bodies all of the time. Satellites are providing a tool to help inform how and when to expend resources to go and collect water samples.”

Since 1978 and the launch of the Coastal Zone Color Scanner, NASA has been observing the color of the ocean surface to study phytoplankton populations. With later instruments like the Moderate Resolution Imaging Spectroradiometer (MODIS) on NASA’s Terra and Aqua satellites, the resolution improved enough to distinguish conditions in larger inland lakes and reservoirs. Scientists began to use the data to detect signatures of cyanobacteria in fresh water.

Cyanobacteria occur naturally in many bodies of water from the Great Lakes to neighborhood ponds. In small numbers, these algae are not a problem. But under the right conditions—warm water, sunlight, abundant nitrogen and phosphorous nutrients (often from fertilizer and septic systems)—cyanobacteria populations can explode into potentially toxic blooms. Even though individual algae are microscopic, their vast blooms can be seen from space as large green swaths and patches of chlorophyll, the pigment used in photosynthesis.

Beyond natural light, cyanobacteria can be detected using fluorescence; that is, some algae blooms emit fluorescent light in response to sunlight. Instruments on the NASA/USGS Landsat satellites, the European Space Agency’s Sentinel-2 and 3 satellites, as well as several others, can detect the various spectral signatures of algae. Compiling and analyzing satellite images of different resolutions and wavelengths, NASA supercomputers produce weekly reports on the color and other properties of water across thousands of lakes, reservoirs, and ponds in the United States. The images above, based on data from Landsat 8, offer a glimpse of what scientists can detect from above.

Ultimately, the goal is to create a water quality monitoring system that leverages data from satellites and information gathered directly from the water, said Nima Pahlevan, a researcher at NASA Goddard and member of the Landsat science team. Pahlevan and colleagues are working with current and historical Landsat data to identify lakes, rivers, reservoirs, and other water bodies prone to algae blooms. The Landsat mission has been operating since the 1970s, so researchers and water managers can track the history of a given lake to determine if each lake —or potentially even an individual pixel within an image of a lake—has changed in a way that indicates a bloom.

One challenge is that there are not many in situ water measurements being taken across the different lakes to compare with and verify what the satellites are reporting. Pahlevan and collaborators have recently placed instruments in Green Bay, Wisconsin; Lake Okeechobee, Florida; and Grizzly Bay, California, in order to take direct measurements of the water for comparison with Landsat and other satellite measurements. They are also conducting field work in the summer of 2019. Pahlevan hopes to build up the program and expand it to an operational system with more locations by summer 2020.

For people like Donalea Dinsmore of the Wisconsin Department of Natural Resources, more satellite monitoring tools would be a welcome addition to the suite of methods the state uses to keep a handle on where harmful algal blooms occur. “With 15,000 lakes, can you visit them all? And depending on when you visit, you might just miss a bloom,” Dinsmore said. “It can be a really complicated and expensive monitoring program if you go in blind.”