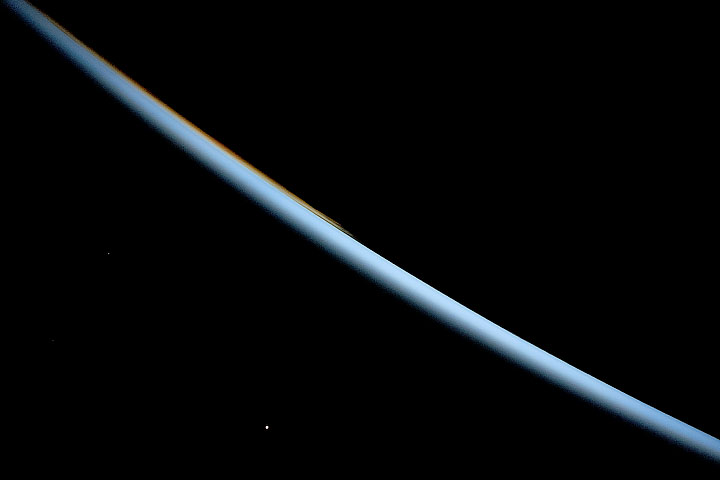 Sunlight begins to spill over Earth’s horizon, the prelude to a new day over the Pacific Ocean. The limb presents a stark contrast between dawn on Earth and the blackness of space. Orbiting Earth approximately every 90 minutes, astronauts living and working on the International Space Station (ISS) see sixteen sunrises and sunsets every 24 hours.

The astronaut who took this photograph was also interested in a bright spot beyond Earth’s limb: our celestial neighbor, Venus. Note that the orientation of the image is presented as the astronaut observed it, with Earth on the upper right.

Besides the Moon, Venus is the brightest natural solar system body that can be observed in our night sky. Venus is visible near Earth’s horizon as the “evening star” (around sunset) for a few months; passes in front of the Sun (from our perspective), obscuring it from view for several weeks; becomes the “morning star” (around sunrise) for a few months; and then passes behind the Sun for a bit—a circuit that takes 19 months.

From Earth’s surface, we are able to see Venus with our naked eyes even in areas of high ambient light (such as urban centers) if the weather conditions are clear. On the ISS, cosmic views are not affected by Earth’s atmospheric conditions or urban lighting. However, the station’s trajectory, attitude, and structures such as solar panels or visiting spacecraft can hinder a clear line of sight.

In 2012, another astronaut onboard the Space Station took photos of the transit of Venus—when the planet crossed the face of the Sun from Earth’s perspective. Such rare transits can only be viewed from Earth twice a century. The next viewing opportunity will occur in 2117.

Astronaut photograph ISS059-E-75342 was acquired on May 25, 2019, with a Nikon D5 digital camera using a 58 millimeter lens and is provided by the ISS Crew Earth Observations Facility and the Earth Science and Remote Sensing Unit, Johnson Space Center. The image was taken by a member of the Expedition 59 crew. The image has been cropped and enhanced to improve contrast, and lens artifacts have been removed. The International Space Station Program supports the laboratory as part of the ISS National Lab to help astronauts take pictures of Earth that will be of the greatest value to scientists and the public, and to make those images freely available on the Internet. Additional images taken by astronauts and cosmonauts can be viewed at the NASA/JSC Gateway to Astronaut Photography of Earth. Caption by Andrea Meado, Jacobs Technology, JETS Contract at NASA-JSC.