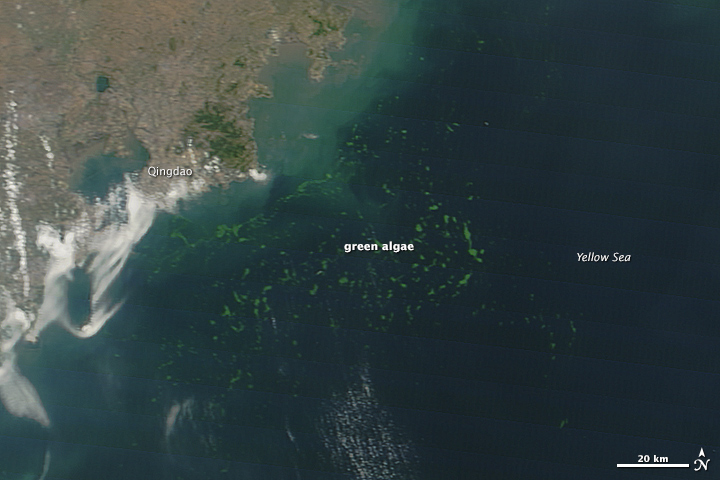 In June and early July 2013, beaches and bays along the east coast of China’s Shandong Province were coated in thick mats of green algae, or seaweed, that washed in from the Yellow Sea. According to The Los Angeles Times, the algae Ulva prolifera covered 11,500 square miles of coastal water—more than twice the area of Los Angeles County—and piled up as much as 16 inches deep on some beaches around Qingdao.

The Moderate Resolution Imaging Spectroradiometer (MODIS) on NASA’s Terra satellite acquired this image of algae in the Yellow Sea on June 29, 2013. Mats of the algae show up offshore in the open sea but are harder to spot near the coast. The resolution of the MODIS sensor is 250 meters per pixel, so the imager is better at showing broad areas than fine features.

Reports from international and Chinese news sources suggested that the algae did not deter many beachgoers in the province; it is harmless to humans. Massive phytoplankton blooms have become more frequent along the Shandong coast (sixth year in a row) and many other coasts around the world as excessive nitrogen from fertilizers and from septic and sewage systems provides nutrients for algae both harmless and toxic. Coastal scientists note that such blooms are a mixed blessing, promoting growth of some species, crowding out others, and reducing oxygen and sunlight needed by other marine life.

Several news agencies have shore- and ship-based close-ups of the bloom, including: Xinhua News Agency and the Los Angeles Times.