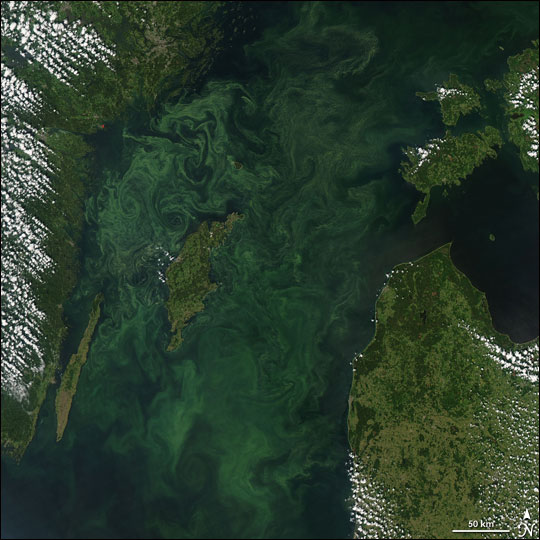 The Baltic Sea blooms with life two times per year, once in the spring and once in the late summer. This photo-like Moderate Resolution Imaging Spectroradiometer (MODIS) image shows the deep green swirls of the summer bloom around the Swedish island of Gotland. The summer bloom is usually caused by blue-green algae growing on the surface of the water. The algae thrive when ocean waters are warm and winds are calm. Strong winds would churn the ocean, stirring the plants down into the water’s depths.

Different types of blue-green algae grow in these waters, at least one of which, Nodularia spumigena, is toxic, but it is impossible to tell what kind of algae covers the sea from this image alone. Quite possibly, many different kinds of algae make up this bloom.

Unlike the summer bloom, the spring bloom is made up of non-toxic, cold-loving plants called diatoms and dinoflagellates. These tiny plants spread over the surface of the Baltic Sea when spring’s thaw brings a rush of icy-cold water from the land into the sea.

Though these blooms occur naturally, human activity can increase the number of widespread blooms. Agricultural and industrial run-off pour fertilizers into the sea, providing the additional nutrients that algae need to form large, dense blooms. Such blooms harm both marine ecosystems and humans. The bacteria that consume the decaying plants suck oxygen out of the water, creating dead zones where fish cannot survive. Large summer blooms can contain toxic algae that are dangerous for humans and other animals.

MODIS flying on board NASA’s Aqua satellite captured this image on July 5, 2005. The image is available in multiple resolutions from the MODIS Rapid Response Team.