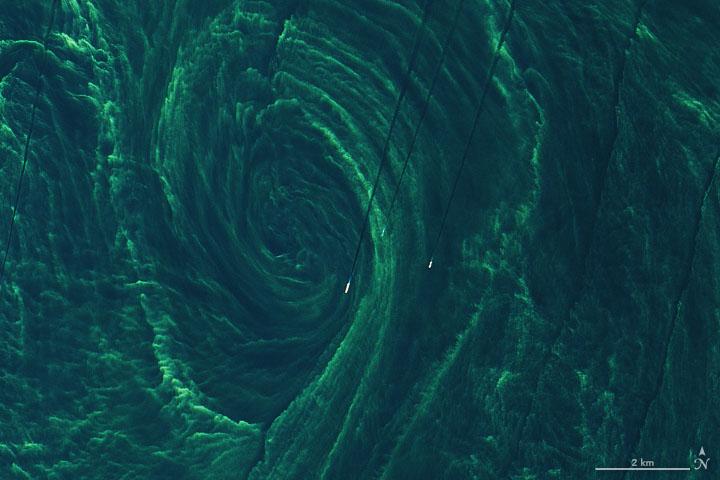 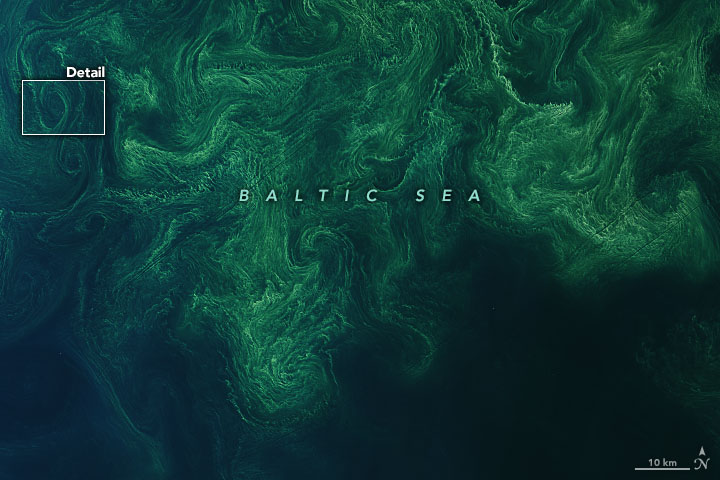 These natural-color images, acquired on August 15, 2020, with the Operational Land Imager (OLI) on Landsat 8, show a late-summer phytoplankton bloom swirling in the Baltic Sea. The images feature part of a bloom located between Öland and Gotland, two islands off the coast of southeast Sweden. Note the dark, straight lines crossing the detailed image: these are the wakes of ships cutting through the bloom.

Confirmation of the type of phytoplankton within this bloom would require the analysis of water samples. But experts familiar with blooms in this region say it is likely to be cyanobacteria—an ancient type of marine bacteria that captures and stores solar energy through photosynthesis. Large, late-summer blooms of cyanobacteria occur almost every year in the Baltic Sea.

Sediment cores extracted from the seafloor indicate that blooms of cyanobacteria have occurred in the Baltic Sea for thousands of years and they have played an important role in this aquatic ecosystem. Cyanobacteria are “nitrogen fixers” that can convert molecular nitrogen into ammonia—a more biologically useful form of nitrogen that all phytoplankton can use as a nutrient to fuel growth. Cyanobacteria do especially well in the Baltic Sea, where there is ample phosphate—another nutrient important for the organism to grow.

In the past, blooms in the Baltic Sea have intensified as a result of nutrient runoff from lands around the sea (particularly agricultural fertilizer and sewage). This source of excess nutrients has declined in recent decades, but blooms still thrive due to the abundance of phosphate in deeper waters. Excessive phytoplankton and algae growth can deplete the amount of oxygen in the water and cause dead zones.

The extent of this bloom spanned an area beyond the scope of these images; browse satellite images in Worldview to see it in context with the wider area. In some years, such as 2019, cyanobacteria blooms have covered as much as 200,000 square kilometers of the sea surface—slightly less than half the size of Sweden.