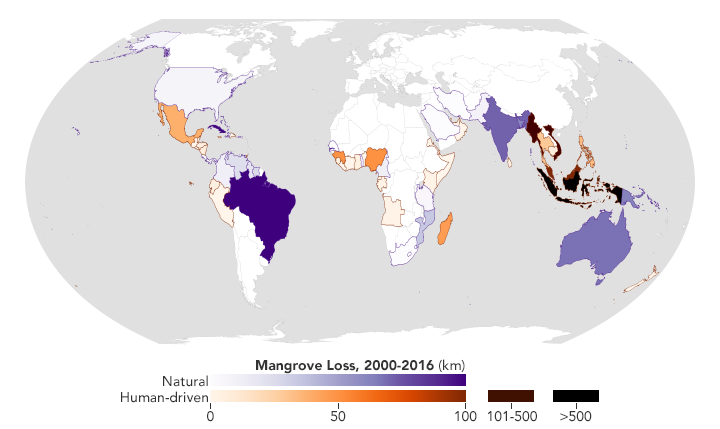 Using data from Landsat, researchers have created a new map depicting the causes of change in global mangrove habitats between 2000 and 2016. The map will benefit researchers investigating the impacts of mangrove gain and loss on the global carbon cycle, while also helping conservation organizations identify where to protect or restore these vital coastal habitats.

Mangroves are hardy trees and shrubs that grow in the salty, wet, muddy soils of Earth’s tropical and subtropical coastlines. They protect the coastlines from erosion and storm damage; store carbon within their roots, trunks, and in the soil; and provide habitats for commercially important marine species.

In a study released in 2010, mangroves were found to cover about 138,000 square kilometers (53,000 square miles) of Earth’s coastlines. The majority of these ecosystems were found in Southeast Asia, but they existed throughout the tropical and subtropical latitudes around the globe.

In the new study, researchers from NASA’s Goddard Space Flight Center used machine learning algorithms to analyze nearly one million images from the Landsat 5, 7, and 8 satellites. They first looked for changes is forest and land cover, then reviewed images for the type of land use. The team found that nearly 3400 square kilometers (1,300 square miles) of mangrove forests were lost between 2000 and 2016, or about 2 percent of global mangrove area. Roughly 62 percent of the losses were due to direct human causes, such as farming and aquaculture.

Overall, the rate of mangrove habitat losses fell during the period, for both human-caused and natural (environmental) losses such as erosion and extreme weather. However, losses from natural causes now make up more of the overall total than in 2000. For conservation and resource managers trying to prevent loss or re-establish new habitats, this finding suggests the need to better account for natural causes.

The map above shows the location and relative intensity of mangrove losses from 2000 to 2016. Countries colored orange and black had more losses of mangroves from human causes, while those in purple had more losses due to natural causes. The darker the color, the greater the area lost. The bar chart below shows those losses broken down by regions and by 5- and 6-year increments. The lead author of the study was Liza Goldberg, an intern at NASA’s Goddard Space Flight Center and a rising freshman at Stanford University.

Mangroves are also uniquely efficient carbon sinks—locations where carbon is removed from the atmosphere and stored in the Earth. Their leaves fall to the waterlogged soil and decompose very slowly, creating peat instead of releasing carbon back into the atmosphere. When these trees and shrubs are cut down or destroyed by storms or floods, that carbon instead escapes into the atmosphere, where it contributes to climate change as a greenhouse gas. Though they make up only 3 percent of Earth’s forest cover, mangroves could contribute as much as 10 percent of global carbon emissions if they were all cut down.

“Mangroves provide shoreline protection from extreme storms and waves,” said Fatoyinbo. “Because they are amphibious trees, their root structure protects inland areas from the coast. They also protect the coast from the inland areas, because they are able to accumulate a lot of the soil that comes in from upstream or from the coast. They hold that sediment in their roots and essentially grow new land. If you have areas where you have increased erosion due to sea level rise, mangroves might counter that.”

Mangroves have been threatened by deforestation for at least the past 50 years, as agriculture, aquaculture, wood harvesting, and urban development have caused the loss of more than a quarter of known mangrove forests. Mangroves in Southeast Asia have been especially hard-hit, as people have cleared mangroves to make room for shrimp and rice farming.