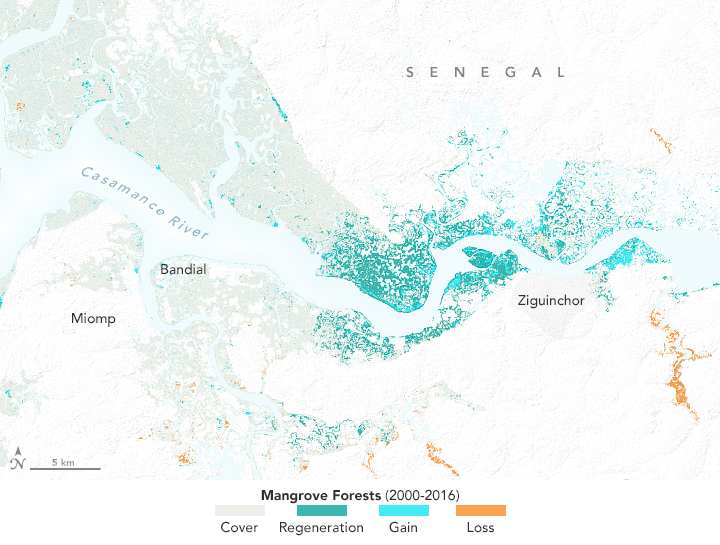 Many of Senegal’s largest rivers are flanked by corridors of green and interlaced with networks of sinuous creeks and streams. These lush green areas are havens for mangroves—short, shrubby trees with waxy leaves and tangles of finger-like roots that rise from shallow tidal areas.

The blend of land, water, and wood that define Senegal’s mangrove forests are not just beautiful; they are important. Mangroves store large amounts of carbon. Studies have shown that mangrove forests sequester at least two to four times more carbon than other tropical forests. They also provide breeding grounds and nurseries for fish, prevent erosion during tropical cyclones, and help cleanse waters of pollutants.

While scientists estimate that Earth lost at least 35 percent of global mangrove habitat between 1980 and 2000 (often due to aquaculture and other coastal development), there are signs that these ecosystems are surviving and even retaking lost ground in some areas. For instance, Senegal’s mangroves have experienced significant regeneration and expansion since 2000, according to a satellite-based analysis by NASA scientists Lola Fatoyinbo and David Lagomasino. Over the 16-year period, the scientists measured an expansion totaling 48 square kilometers (19 square miles), or 2 percent. They observed regeneration across 148 square kilometers (57 square miles), an increase of 6 percent.

This regrowth after decades of loss likely had several causes, the scientists say. A prolonged and damaging drought in the 1970s and 1980s killed many of Senegal’s mangroves; the water became too salty when the freshwater flow from rivers dwindled. The easing of that drought allowed mangroves to recolonize many areas. Meanwhile, the normal deposition of sediment along river edges has created new shallow areas that mangroves have been able to colonize.

Senegal has established parks and used other conservation measures to protect some mangroves from being damaged or cleared. Several non-governmental organizations and environmental groups also launched mangrove-planting projects. The Saloum and Casamance deltas, in particular, have been a focus of “blue carbon” restoration efforts, with one organization reporting that it planted more than 79 million trees in the two deltas.

The map above shows how mangrove forests along the Cassamance River changed between 2000 and 2016. The analysis is based on Landsat satellite observations of the “greenness” of vegetation, or the Normalized Difference Vegetation Index (NDVI). Areas marked as gain (teal) had no mangroves in 2000 but measurable growth by 2016. Areas marked as having regenerated (green) had mangroves in 2000 that became significantly greener and denser by 2016. The natural-color image below was acquired by the Operational Land Imager (OLI) on Landsat 8 on March 5, 2018. 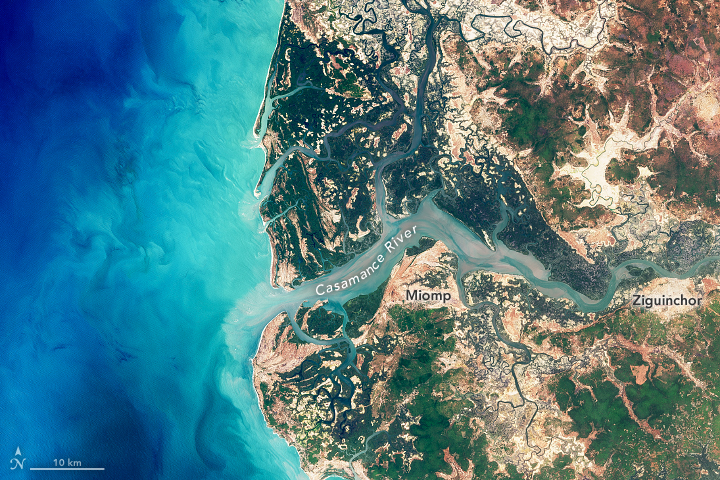 “For decades, there has been so much negative news about losing mangroves that it is easy to forget that these are plants that are almost perfectly designed to trap sediment and colonize empty mudflats,” said Fatoyinbo. “The regeneration of mangrove ecosystems is something we are actually seeing in several parts of the world now.”

Editor’s Note: March 21 is the International Day of Forests, a day established by resolution of the United Nations General Assembly to celebrate and raise awareness of the importance of all types of forests. Fatoyinbo and Lagomasino conducted their analysis in support of a partnership between NASA and the United Nations to track progress toward achieving Sustainable Development Goals. Several NASA initiatives are underway to demonstrate how satellite data can be used to help countries monitor progress towards a number of these goals. 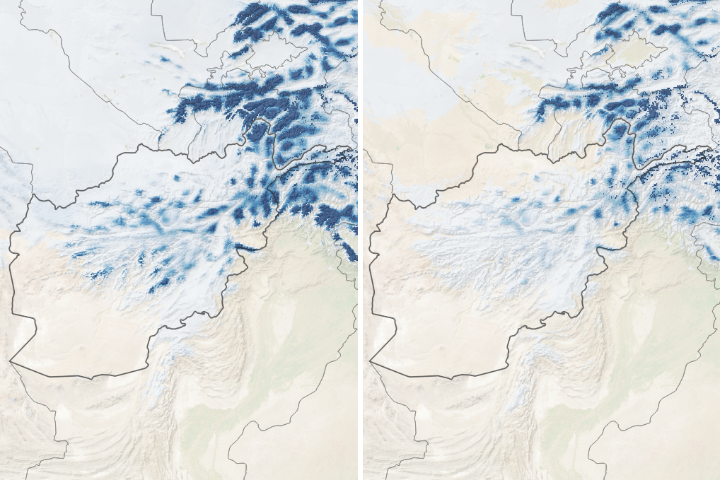 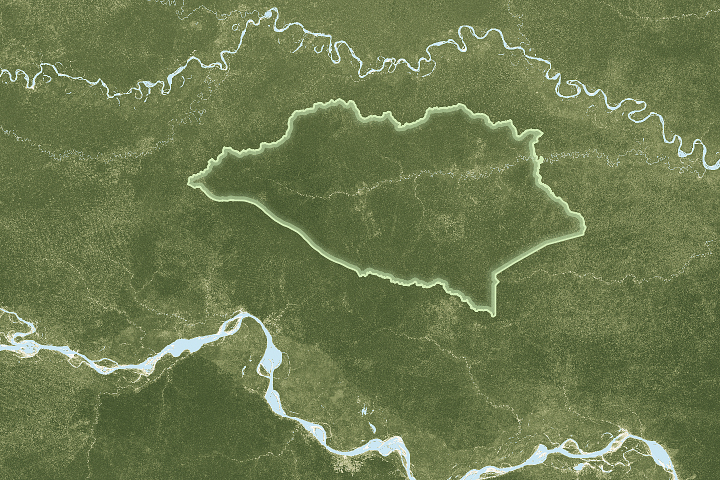