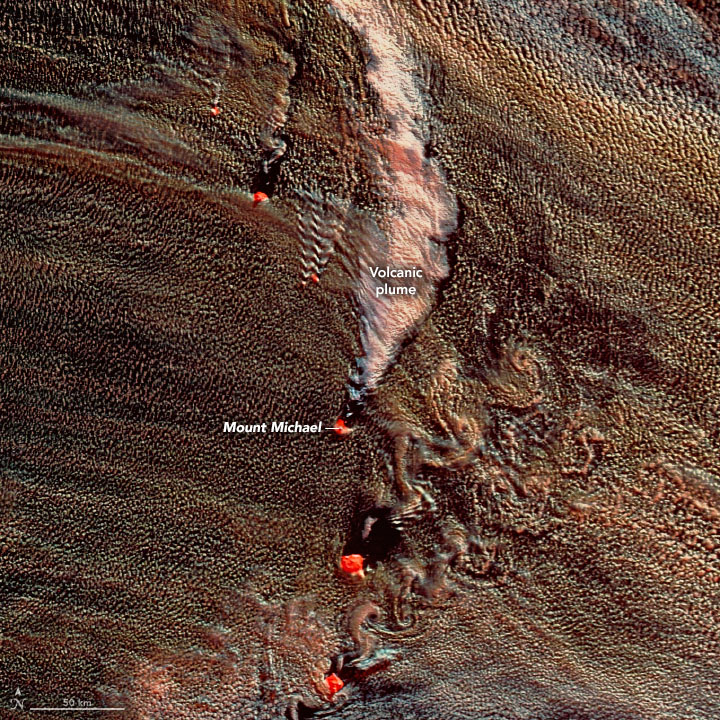 In 2008, atmospheric scientist Santiago Gassó authored a study that highlighted abnormally bright trails of clouds around remote peaks in the South Sandwich Islands. The unusual looking clouds were caused by volcanoes emitting sulfur dioxide and other gases and particles that interacted with passing clouds and made them brighter and more lasting than the surrounding clouds.

More than a decade later, the NASA and University of Maryland scientist is still tracking and learning from these “volcano track” clouds over the South Atlantic Ocean. In 2020, he watched several of them during a period of sustained period of activity on Mount Michael. For two weeks in mid-May, NASA satellites observed volcano tracks nearly every day.

On some days, wide tracks extended for hundreds of kilometers from the volcano. But on most days, the tracks were thin and faint, indicating that the volcanic activity was not especially intense. Degassing of sulfur dioxide and other gases is routine on Mount Michael, which has a persistent lava lake roiling deep inside its central crater. On May 30, 2020, the Moderate Resolution Imaging Spectroradiometer (MODIS) on NASA’s Terra satellite captured this false-color image of a volcano track near Mount Michael. Waves clouds and Von Kármán vortices are visible downwind of neighboring islands.

Cloud brightening—the technical term is the Twomey effect—is something scientists have observed for decades. Clouds with extra particles from volcanoes have more and smaller cloud droplets than normal clouds. This means there are more surfaces to reflect light, making volcanically “polluted” clouds appear brighter than others. The same process produces bright ship track clouds over the ocean, except in that case the extra particles come from ship exhaust.

While faint volcano tracks can be difficult to see in natural-color imagery, near-infrared light can help. “When I look for volcano tracks with MODIS, I use the 3-6-7 band combination because it includes near-infrared channels that are particularly sensitive to changes in droplet size, a direct result of the volcanic particles entering the cloud,” explained Gassó. “That way the volcano track jumps out without me having to squint much.”

The many active volcanoes, abundant cloud cover, routinely fierce winds of the “Roaring Forties”—plus the laws of fluid dynamics—often make for unusually beautiful swirls, patterns, and waves in the air above the South Sandwich islands.

The island chain has also proven to be an ideal natural laboratory for science. “There is a lot of interest in how human-caused pollution affects clouds on a global scale and how it is affecting the climate. But in other areas of the world, it can be difficult to tell if cloud brightening is caused by shifts in meteorology or the presence of pollution particles,” said Gassó. “With the volcano tracks from the South Sandwich Islands, there is no question at all. The brightening is from volcanic ‘pollution,’ and that is really useful for developing models that can quantify how this cloud brightening effect works on a global scale.”