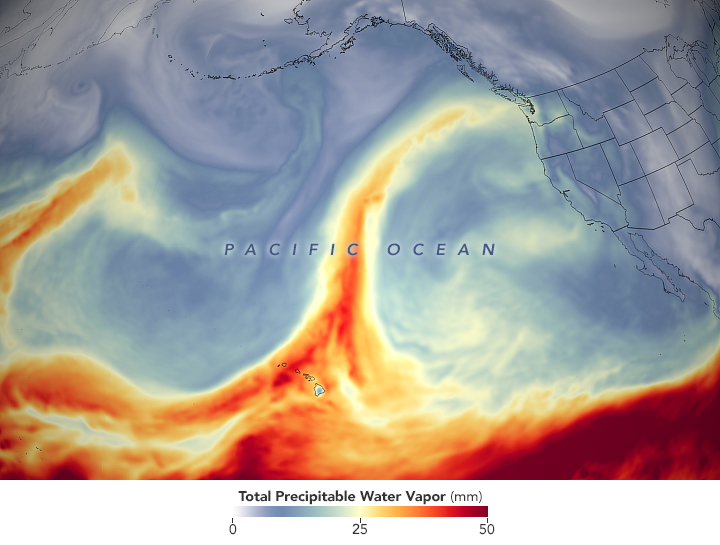 January 2020 in the Pacific Northwest was exceptionally wet. Seattle, for example, received a measurable amount of rainfall almost every day of the month. Wet conditions continued through the first week of February, when a stream of water vapor from the tropical Pacific moved even more moisture into the region.

This map shows the total precipitable water vapor in the atmosphere at 1 a.m. Pacific Standard Time on February 6, 2020. The image was derived from a NASA model known as the Goddard Earth Observing System Data Assimilation System (GEOS DAS), which uses satellite data and mathematical representations of physical processes to calculate what is happening in the atmosphere.

Total precipitable water vapor is the depth of water in a column of the atmosphere if all the water vapor in that column were condensed into liquid. In this image, red areas represent the highest values of precipitable water vapor, which showed up that day as a narrow feature known as an atmospheric river. The precipitation from atmospheric rivers accounts for up to 50 percent of all rain and snow that falls in the western United States. They are also responsible for almost all of the major flood events on river systems in western watersheds.

That’s not to say all precipitable water vapor actually falls as rain; at least some water vapor stays behind in the atmosphere. Nor is it a limit on the amount of rain that can fall, which can increase as water vapor moves into the column of air. It is, however, a useful indicator of regions where rainfall could be excessive. 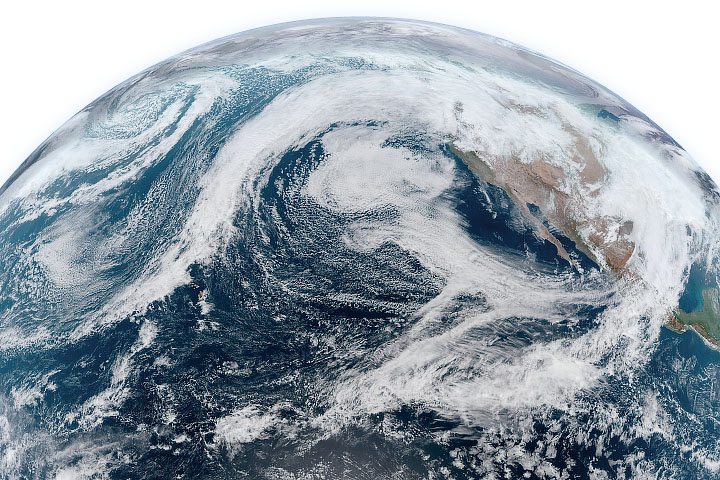 The simulated natural-color image above, acquired on February 5, 2020, by NOAA’s Geostationary Operational Environmental Satellite 17 (GOES-17), shows an arc of clouds stretching from Hawaii to the Pacific Northwest—a visible manifestation the atmospheric river pouring moisture into the area. But atmospheric rivers that simply carry a lot of moisture are not necessarily the highest producers of precipitation. “You need a trigger to realize the moisture from the atmospheric river as precipitation,” said Gary Partyka, an atmospheric scientist with the GMAO at NASA’s Goddard Space Flight Center. “That trigger over the Pacific Northwest generally comes in the form of the terrain.”

According to Martin Ralph, an atmospheric scientist at the Scripps Institution of Oceanography, the event on February 6 was not a typical atmospheric river. Instead of encountering Northwest Washington straight on—the ideal approach for enhanced precipitation—the river of air curved over a high-pressure system off the U.S. West Coast and approached Washington from the northwest.

“This atmospheric river still generated significant precipitation over the Coast and Cascade ranges, resulting in flooding throughout Northwest Washington,” Ralph said. “The orientation of vapor transport has also been favorable for inland penetration, resulting in a heavy precipitation event the interior Mountain West.”

Ralph and colleagues, who have developed a scale system for atmospheric rivers based on their maximum intensity and duration, say the event was an AR3 over coastal Washington. That’s right in the middle of the five-tier scale and means that the atmospheric river was strong and capable of delivering a balance of beneficial and hazardous impacts.

Hazardous impacts, according to news reports, have included saturated soils posing an elevated risk of landslides and rivers that rose above flood stage. Among the benefits are increased snowpack, which after the January and early February precipitation has reached near-normal levels across Washington after a slow start to the season.