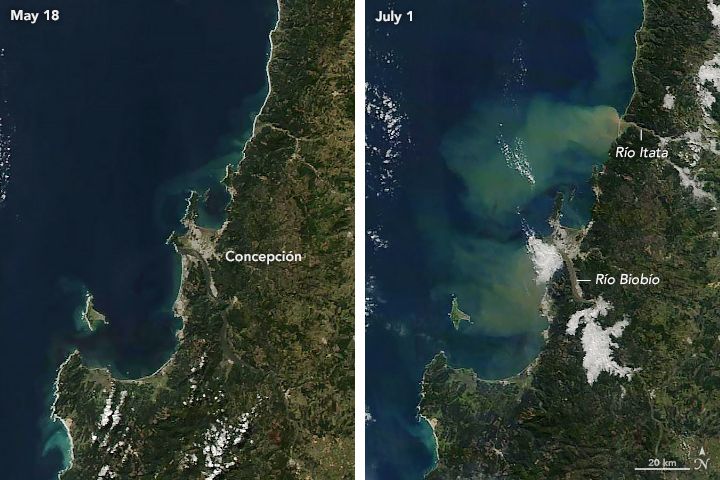 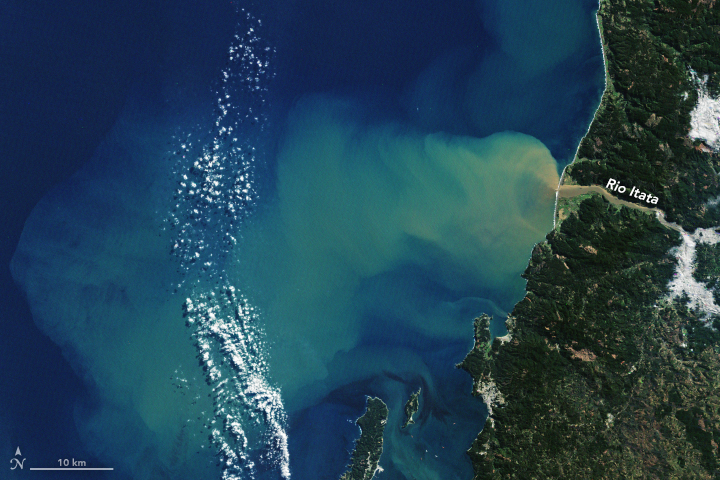 In late June 2019, a potent atmospheric river event carried soaking rain into southern Chile, dropping nearly a month’s worth of precipitation in just 48 hours. According to atmospheric scientist René Garreaud of Universidad de Chile, 100 to 200 millimeters (4 to 8 inches) of rain fell over a wide area near Concepcion, leading to landslides and severe flooding in the Biobio and Araucania regions.

The images above capture some of the signs of that deluge. The top natural-color pair was acquired by NASA’s Moderate Resolution Imaging Spectroradiometer (MODIS) instruments on May 18 by the Aqua satellite and on July 1 by Terra a few days after the storm. The third image was acquired on July 1 by the Enhanced Thematic Imager+ on Landsat 7. The discolored water offshore, which extends more than 50 kilometers in some areas, is sediment that ran off the hillsides and downriver.

Atmospheric rivers stretch tens to hundreds of kilometers wide, can carry an amount of water vapor equivalent to 7.5 to 15 times the flow at the mouth of the Mississippi River. These weather systems are essentially jet streams of moist air. They often occur off the west coast of North America, sending soaking rain into California, Oregon, and Washington. In subtropical Chile, atmospheric rivers contribute 45 to 60 percent of the annual precipitation, most of it in the winter rainy season (June to September), according to a 2018 research paper.

According to Garreaud, the early winter rainfall increased discharge on some rivers by ten-fold, carrying nutrient-rich sediments into the coastal zone. Garreaud and colleagues study how such outflows of nutrients promote and sustain phytoplankton blooms in the southern winter.