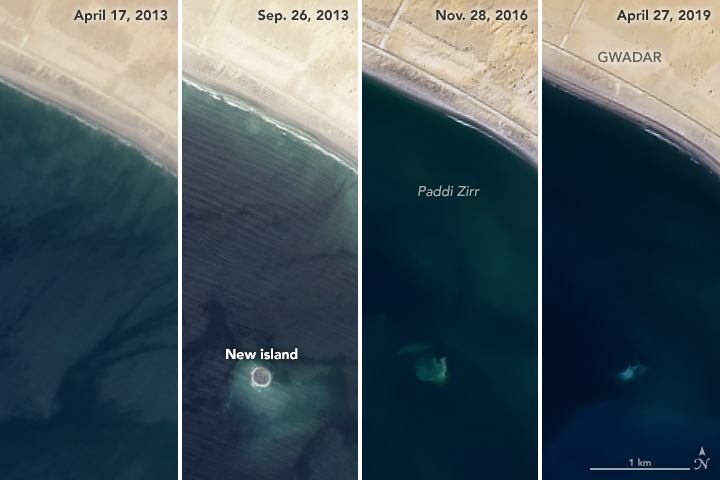 After a 7.7 magnitude earthquake shook western Pakistan in September 2013, an oval-shaped island sprang up in a shallow bay near the port city of Gwadar. The island, called Zalzala Koh (Earthquake Mountain in Urdu) was the product of a mud volcano triggered by the earthquake. At the time, geologists said the tiny island—20 meters high, 90 meters wide, and 40 meters long—would not last long when faced with waves and tides that would chip away at the muddy, silty feature.

They were right. For a few years, Landsat regularly acquired images with trails of mud and sediment discoloring the water around the island. By the end of 2016, not much terrain was left above the water line. Satellite images indicated that the Arabian Sea was washing over the island at high tide, affirming local news stories that the island had disappeared.

Zalzala Koh may be out of sight for now, but that does not mean it is completely gone. In 2019, hints of the island persist in Landsat imagery. As recently as June 2019, Landsat observed trails of sediment circulating around the submerged base. The series of images above shows the island in April and September 2013, November 2016, and April 2019. The Advanced Land Imager (ALI) on EO-1 acquired the September 2013 image; all the others images came from the Operational Land Imager (OLI) on Landsat 8.

“The rapid accumulation of soft, clay-rich sediments along the edge of the Eurasian plate, combined with the high tectonic stresses, causes a sharp build-up of pressures in the water and gases that are trapped within the sedimentary rock. The fluid pressures become so great that clay-rich sediments buried deep underground behave almost like a liquid,” explained University of Adelaide geologist Mark Tingay. “A mud volcano forms when the fluid pressures become large enough to fracture the overlying rocks that are sealing these intense pressures, allowing the muds and gases to erupt to the surface.”

Islands produced by mud volcanoes in this region have a history of coming and going. About 125 kilometers (75 miles) to the east, another small, circular mud island—Malan Island—has emerged a few kilometers off the coast and eroded away twice in the past 20 years (emerging in 1999 and 2010). Malan Island is also reported to be one of three mud volcano islands that briefly emerged following a devastating earthquake and tsunami in Balochistan in 1945.