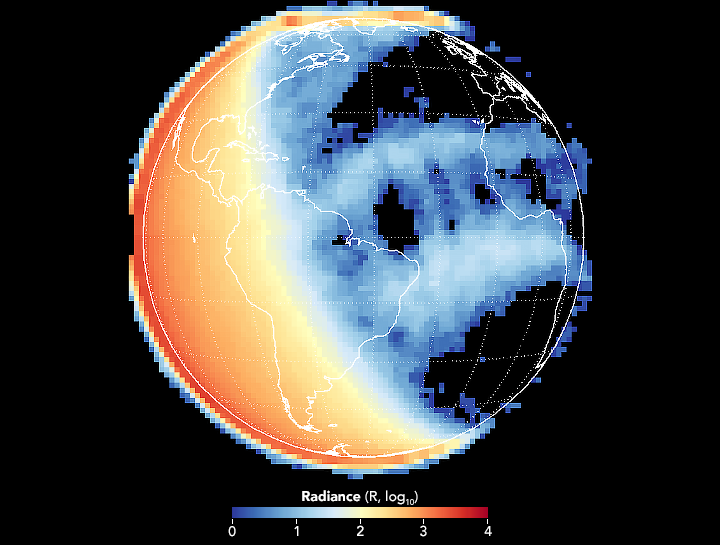 High above the Earth, there is a dynamic region where the atmosphere meets space. Home to astronauts on the space station and to many Earth-observing and commercial satellites, the ionosphere constantly fluctuates and responds to changes from above and below. A NASA-funded instrument is shedding new light on the invisible processes and rhythms at play in this intersection between Earth and space.

Between 80 and 600 kilometers (50 and 400 miles) above the ground, radiation from the Sun cooks some of the gases in our upper atmosphere until they lose an electron or two. The result is a sea of electrically charged particles—ions—intermingled with the neutral upper atmosphere. Energy is constantly streaming in from the Sun and from near-Earth space, an expression of what scientists call space weather. But the ionosphere also responds to weather patterns that ripple up from the lower parts of Earth’s atmosphere. Such changes can make it challenging to work in space, and they regularly affect key communications systems such as high-frequency (HF) radio and GPS.

According to atmospheric scientist Richard Eastes of the University of Colorado, the region is far more variable than scientists expected. That insight comes from work with the Global-scale Observations of the Limb and Disk (GOLD) instrument, which images the ionosphere in ultraviolet light to track changes in temperature, density, and composition.

The image above was acquired by GOLD on December 19, 2018—a view of the entire Western Hemisphere as observed from geostationary orbit. The left third of the sphere is still in daylight, while eastern North and South America were bathed in twilight or darkness. The blue strips stretching across the Atlantic Ocean are known as the Appleton anomaly, a region of the ionosphere around the magnetic equator that stays activated for much of the night due to plasma rising from lower parts of the ionosphere.

Eastes noted that on one night, the crests may be evenly spaced over the equator; the next night, they can be far apart and in an entirely different position. The paths that radio waves take—such as those used by GPS—depend on the density of the ionosphere. Sometimes changes in the density and location of these hot spots can interfere with communications signals. 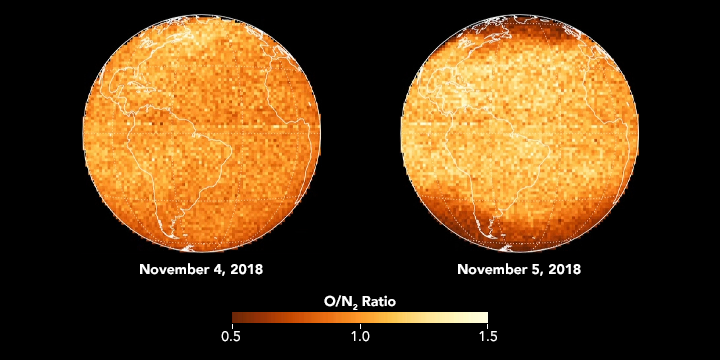 This image pair shows changes in the composition of the neutral atmosphere over the Western Hemisphere in full daylight, before and during a geomagnetic storm on November 4-5, 2018. Note how the ratio of atomic oxygen to nitrogen gas increases at low latitudes (becoming brighter in the image) and decreases at high latitudes (darker) in the wake of the storm.

During such storms, the neutral atmosphere near the magnetic poles is heated by energy coming from the magnetosphere, and the density ratio decreases rapidly and dramatically. At lower latitudes, the opposite happens, as large amounts of atomic oxygen move from high to low latitudes. Since the neutral atmosphere and ionosphere are coupled, composition changes alter the ionosphere density and the behavior of radio communications signals.

Though some features like the Appleton anomaly are not new to scientists, the GOLD research team was surprised by how much the ionosphere varies from night to night. “These were very surprising findings to me, and to the rest of the team that has been looking at this stuff for many years,” said Eastes, the principal investigator for GOLD. “It was not something we anticipated.” 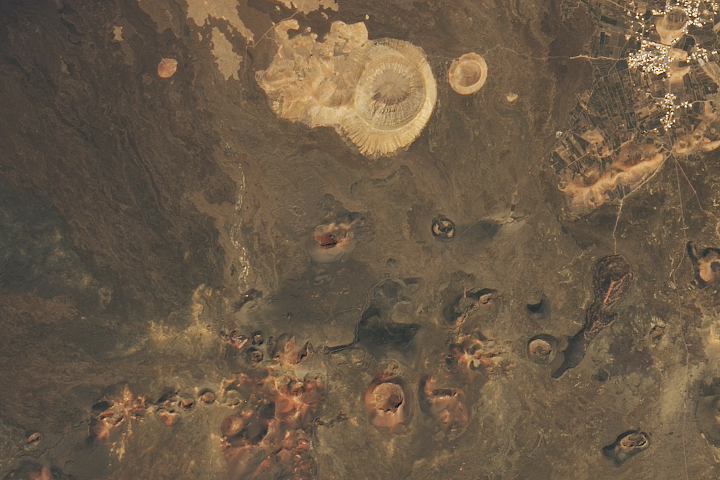