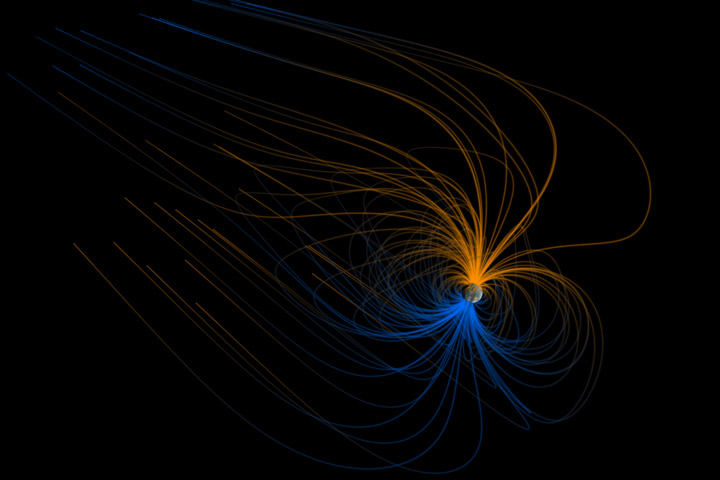 You've seen the pattern in science class when you laid bits of iron around a bar magnet. The invisible force field around the magnet becomes suddenly visible when the iron filings fall into line.

The iron-cored Earth behaves like a great magnet, and scientists have spent a century exploring its shape and structure. The visualization above shows the magnetic field around Earth—the magnetosphere—as it might look from space. This view is conceptual, but based on real science observations that have been made since the beginning of the Space Age. The orange and blue lines depict the opposite north and south polarity of Earth's field lines.

The field lines are not actually visible, but they can be detected by sensors that count atomic particles—charged protons and electrons moving in the space around Earth. Unlike the symmetrical pattern of the iron filings and magnet, the magnetosphere is pushed in on the side facing the Sun and stretched out in the Earth's shadow. This is caused by the solar wind, a stream of high-speed particles flowing out from the Sun and carrying the signature of its own magnetic field.

Like the ozone layer, the magnetosphere is important to life on Earth because it protects us from most of the harmful radiation and hot plasma from the Sun, deflecting it into space. The magnetic field is constantly buffeted by our nearest star's emissions, which can lead to electrical currents flowing in the space around Earth—currents that can disrupt radio transmissions and damage satellites in a phenomenon known as space weather. They can also produce beautiful auroras.