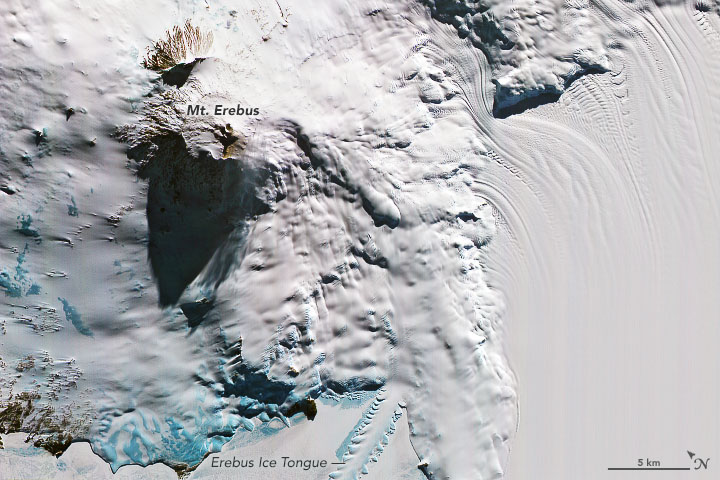 Most of the Antarctic continent is buried under the planet’s largest single mass of ice. But there are a few landmarks that stand out from the endless white, including a volcano that continuously emits gases and occasionally erupts. Mount Erebus is Earth’s southernmost active volcano.

Erebus is featured in this image acquired on October 19, 2019, by the Advanced Spaceborne Thermal Emission and Reflection Radiometer (ASTER) on NASA’s Terra satellite. The image is false-color but looks natural, which is a result of visible and near-infrared wavelengths of light (ASTER bands 3, 2, 1).

The area was just days away from constant 24-hour sunlight when this image was acquired. The Sun angle was still low enough that morning to illuminate the volcano’s eastern slopes, while the volcano cast a mighty shadow to the west. That’s not hard to do, given that the volcano stands 3,794 meters (12,450 feet) above sea level—the second-tallest of more than 100 known Antarctic volcanoes.

Erebus is the dominant feature of Ross Island, which juts out of the Ross Sea and the Ross Ice Shelf. Nearby research facilities—including the U.S. McMurdo Station just 35 kilometers (22 miles) away—means the volcano has been accessible to and well-studied by researchers.

Although not visible in this image, gases regularly rise from the lava lake on the volcano’s summit. On occasion, a large bubble of gas, or “gas slug,” rises up from within the volcano and triggers a Strombolian eruption. This eruption type can eject masses of molten rock up to 250 meters from the lake.

Beyond the volcano and its shadow, sunlight illuminates vivid blue patches amid the white. These areas are clear of surface snow, exposing glacial ice. Nearby areas that appear smooth are the snow- and ice-topped waters of McMurdo Sound. The flat expanse is disrupted by the Erebus Ice Tongue—fast-flowing glacial ice that cuts into the sound like a knife.