A Transylvanian Transect for Halloween 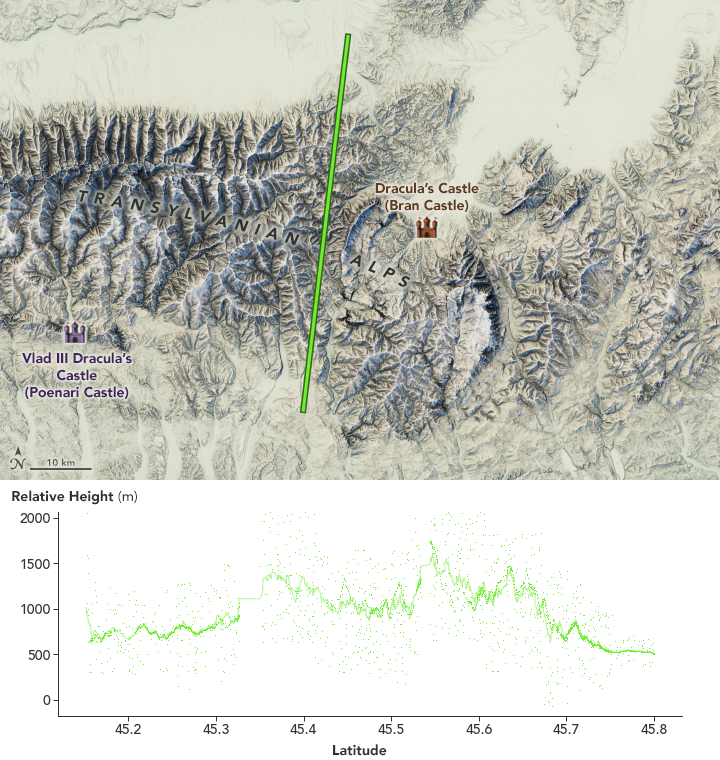 In the opening chapter of Dracula, Bram Stoker described the Transylvanian landscape as “an endless perspective of jagged rock and pointed crags...” It was one of the few kernels of reality in an otherwise fantastic tale about the world’s most famous vampire.

The setting for Dracula is the Southern Carpathian Mountains, also called the Transylvanian Alps. The average elevation in this region ranges from 1500 to 1750 meters (4,900 to 5,700 feet). NASA’s Ice, Cloud, and land Elevation Satellite-2 (ICESat-2) managed to collect some perspective on that legendary landscape on Halloween.

“What we are seeing in the figure (above) are the dramatic mountains and valleys in the area,” said ICESat-2 project scientist Tom Neumann of NASA’s Goddard Space Flight Center. The satellite captured elevation measurements with its Advanced Topographic Laser Altimeter System (ATLAS) on October 31, 2018. The measurements are overlaid on topography data from NASA’s Shuttle Radar Topography Mission (SRTM) to emphasize the terrain.

ATLAS measures elevation by sending pulses of light from the satellite to Earth’s surface. It then measures, to within a billionth of a second, how long it takes individual photons to return to the sensor. Each dot on the visualization above represents a photon detected by ATLAS. Most of the dots are clustered around the surfaces of the mountains and hills. The natural-color image above shows a more detailed view of the area around Poenari Castle and Lake Vidraru (a reservoir) as observed on October 24, 2019, by the Operational Land Imager (OLI) on the Landsat 8 satellite. Note the fall colors on the hillsides, as well as the foreboding shadows cast by the mountains. A drone flyover video gives an even closer perspective on the rugged landscape.

The ICESat-2 flyover passed between two castles connected to the Dracula legend. Poenari Castle was once the home and stronghold for Vlad Tepeş, a warrior and ruler of Wallachia in the late 15th century. He became known as Vlad the Impaler, not because of any supernatural strangeness, but because he often had the bodies of his enemies (often Ottoman and Hungarian soldiers) impaled on stakes as a warning to others who might challenge him.

To the east, the Bran Castle is often cited as Vlad’s home and as the inspiration for Stoker’s gothic novel. Yet historical evidence suggests Vlad the Impaler never set foot in the castle, nor did Stoker know much about it. And the castle described in Dracula is very different from the real one at Bran. That has not stopped tourists from flocking to the area, though.

ICESat-2 collected some perspective on the legendary landscape of Vlad and Dracula.