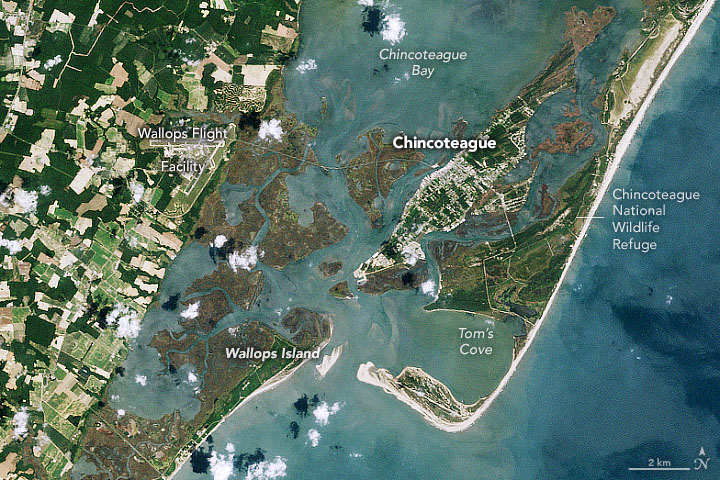 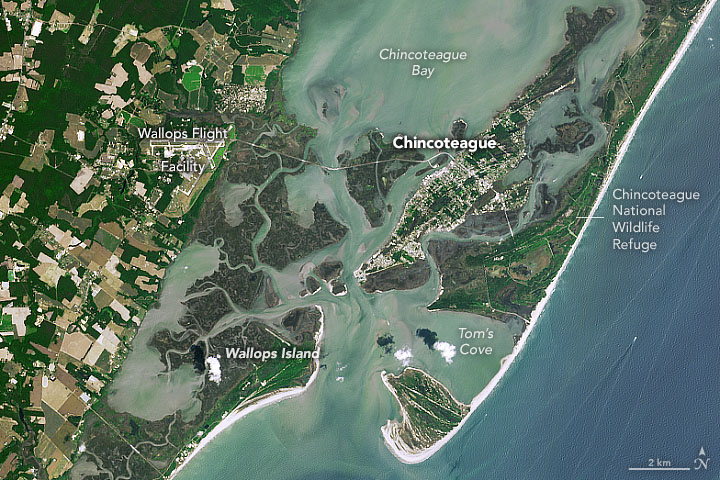 The surface of Earth is constantly changing and evolving. Coastal barrier islands demonstrate such change faster than almost any other landscape.

Assateague Island stretches 37 miles (60 kilometers) from north to south along the Atlantic coast of Maryland and Virginia. As barrier islands go, Assateague is quite dynamic. Longshore currents mostly flow south along this part of the coast, carrying sand to the south. So Assateague Island is steadily, relentlessly losing mass at its north end (near Ocean City, Maryland) and gaining it on the south end near Tom’s Cove.

Assateague also shelters two other islands, Chincoteague and Wallops, in a rare example of overlapping (duplexed) barrier islands. Major storms such as hurricanes and nor’easters sporadically and dramatically move sand from the ocean-facing side of Assateague to its land-facing side, into inlets and bays, and onto the shores of Chincoteague and Wallops. This means all three islands are slowly marching toward a merger with the mainland.

“This is how Assateague Island has been growing for approximately the past 2,000 years,” said Christopher Seminack, a University of North Georgia geologist who has studied the area. “The island is growing to the south as sand shoals are migrating and welding onto the island. You can see evidence of this from the linear features that appear to be welded onto the most southerly part. And because the southern spit of Assateague acts as a sediment sink—the sediment is deposited there—it starves the barrier islands to the south of sand.”

The natural-color images above, acquired by Landsat satellites, show change to Assateague, Chincoteague, and Wallops islands across three decades. The first (left) image was acquired by Landsat 5 on June 20, 1985; the second image shows the same area as observed by Landsat 8 on June 2, 2019. Some of the color differences are related to the different sensors and likely different tidal stages at the time of each image.

Note the southwestward migration of Assateague Island and especially the substantial growth of vegetation on the southern spit. Just across the inlet, the east side of Wallops Island has bulged markedly. Changes in buildings and infrastructure are a bit more subtle. Activity has increased at NASA’s Wallops Flight Facility in recent decades; a new causeway bridge was built to Chincoteague; and more seasonal property and tourist business has sprung up in the area. But according to census estimates, the year-round population of Chincoteague has actually dropped since the 1980s. 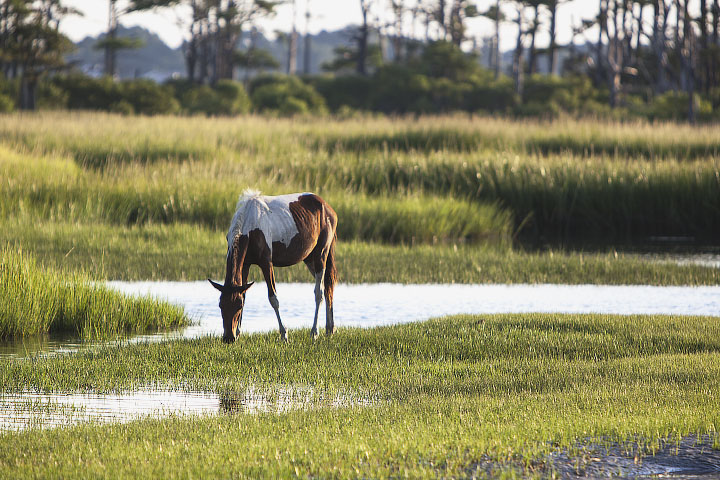 Through all of the changes, wild ponies have stuck around on the islands for several hundred years as the sand has moved under their feet. Legend has it that some of the original ponies arrived from the shipwreck of a Spanish galleon, though more likely they were left abandoned on the island by settlers and farmers. About 150 feral ponies live on the Maryland portion of Assateague and are kept relatively wild, without much human intervention. Another 150 live on the Virginia side and are owned by the Chincoteague Volunteer Fire Company, which provides medical checkups twice a year and auctions off several ponies each summer to raise money and maintain a steady population. All of the horses have adapted to eating salt marsh grasses and brush.

“I spend a lot of time going in and out of Chincoteague inlet on my boat, and I have watched the inlet and islands change pretty dramatically over the past 20 years,” said Kyle Krabill, a research engineer at NASA’s Wallops Flight Facility. Krabill, his colleagues, and his father have been observing these shores for decades as they have tested lidar instruments that are ultimately used to study ice. “I have always been interested in these coastal processes and think it's really neat to watch them move around in our timescale.” 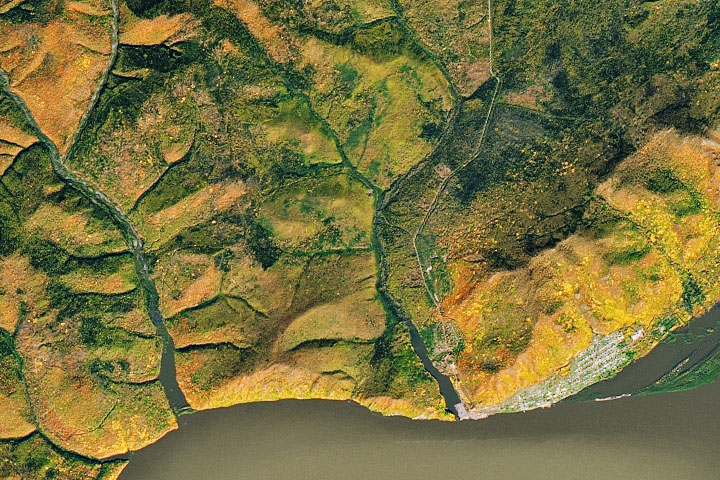 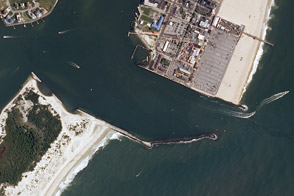