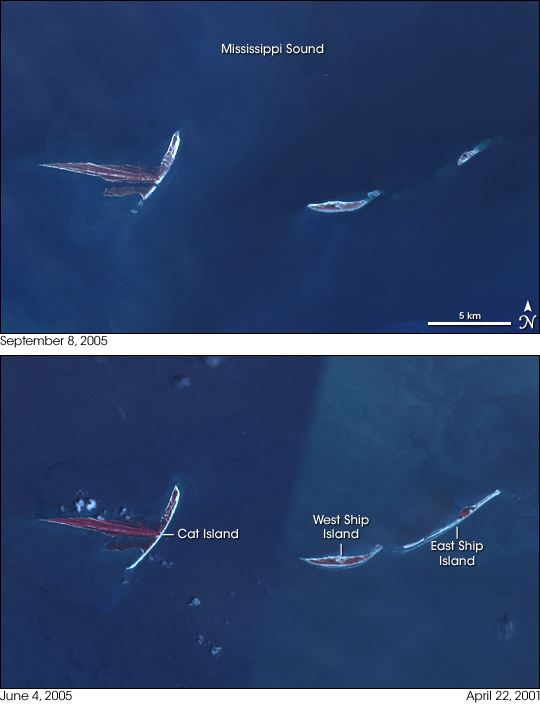 A fringe of barrier islands lines the coast of Mississippi, protecting the mainland from the pounding waves of most ocean storms, but the islands could not shelter the mainland from Hurricane Katrina’s exceptionally powerful storm surge. The battering waves ate away at the islands, permanently altering their shape. The Advanced Spaceborne Thermal Emission and Reflection Radiometer (ASTER) captured the top image of East and West Ship Islands and Cat Island on September 8, 2005. The lower image is a combination of two different ASTER scenes. The left half was acquired on June 4, 2005, while the right half was taken on April 22, 2001. A diagonal line where the ocean changes color indicates the division between the two images.

The most dramatic change can be seen in East Ship Island. Compared to April 2001, most of East Ship Island has disappeared beneath the ocean by September 8, 2005. Some of the erosion may have occurred in other storms between 2001 and 2005, but Katrina is probably responsible for much of the damage. The ghost shores of the island are faintly visible under the water as a lighter shade of blue. West Ship Island, which hosts a civil war fort and a historic lighthouse, and Cat Island have also shrunk slightly. The southern tip of Cat Island is missing, and the pointed tips of Ship Island have been rounded out. The section of the northwestern shore that holds the lighthouse and fort seems to be unchanged.

East and West Ship Islands are no strangers to the type of erosion Katrina inflicted on them. The islands had been a single island until Hurricane Camille cleaved it in two in 1969. In general, barrier islands are constantly changing, their shorelines building and eroding at remarkable speed, with dramatic change occurring routinely when powerful storms strike.

In competition with nature, humans also have a large impact on barrier islands. Such islands are popular vacation spots. Construction can interfere with beach building and can degrade the vegetation that anchors dunes on the islands. Of the barrier islands along the U.S. coast, East Ship Island is one of the few that remains in its natural state, unchanged by population. To preserve the islands, Congress added them to Gulf Islands National Seashore, the United States’ largest national seashore, under the National Park Service. Cat Island forms the western boundary of the park, which consists of a string of islands along the Mississippi and Florida coasts, including East and West Ship Island.