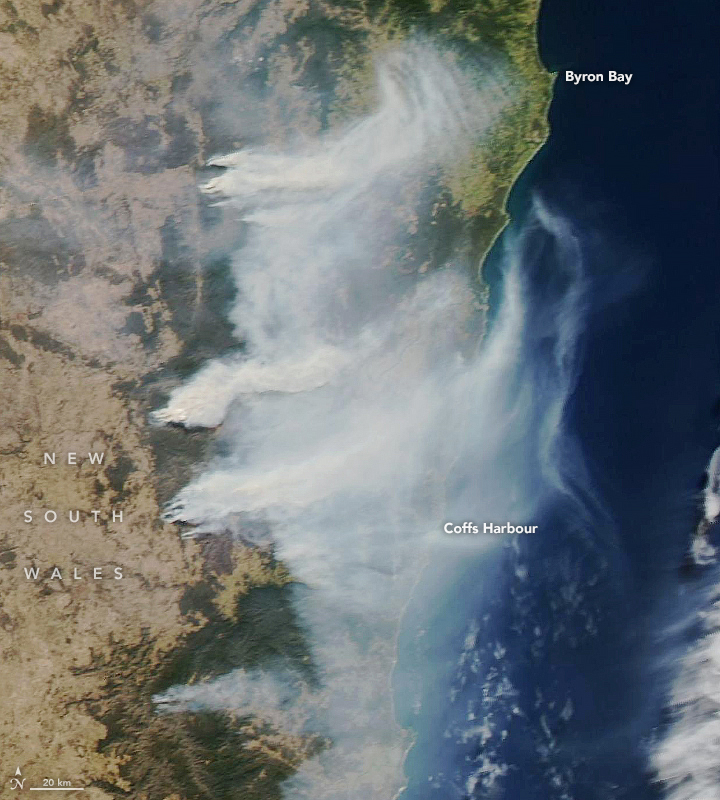 Fire season in the Australian states of Queensland and New South Wales got off to an early and ugly start in September 2019. Fueled by a long and deepening drought, more than 100 fires burned in forest and bush areas near the southeast coasts, including some subtropical rainforests and eucalyptus forests that do not often see fire.

The Bushfire and Natural Hazards Cooperative Research Center reported in late August that the 2019-20 fire season—which usually peaks in October near the coast and later in the spring and summer inland—has the potential to be quite active. Conditions all year have been quite warm and dry across much of the nation. With some areas already facing water shortages, and with strong winds fanning the flames, firefighting has been difficult.

On September 12, 2019, the Moderate Resolution Imaging Spectroradiometer (MODIS) on NASA’s Aqua satellite acquired the natural-color image (above) of fires in the northeastern reaches of New South Wales. Strong westerly winds fanned the flames and carried smoke more than 100 kilometers (60 miles). 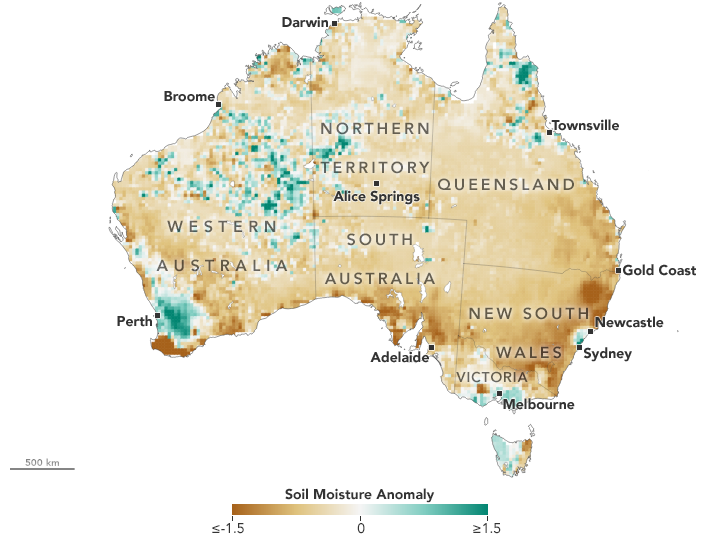 The map above shows soil moisture anomalies, or how much the water content near the land surface was above or below the norm as of September 5-7, 2019. The measurements are derived from data collected by the Soil Moisture Active Passive (SMAP) mission, a NASA satellite dedicated to measuring the water content of soils. SMAP’s radiometer can detect water in the top 5 centimeters (2 inches) of the ground. Scientists use that surface layer data in a hydrologic model to estimate how much water is present even deeper in the root zone, which is important for agriculture.

According to the Australian Bureau of Meteorology (BOM), “August rainfall was below average over much of New South Wales, southern Queensland, northern and eastern Victoria, South Australia, and northern Tasmania,” and conditions are not expected to improve anytime soon. Drier than normal conditions have persisted since the beginning of 2017 and, according to BOM, the past 32 months have been the driest on record for New South Wales—34 percent below average.