Smoke and Clouds over Russia 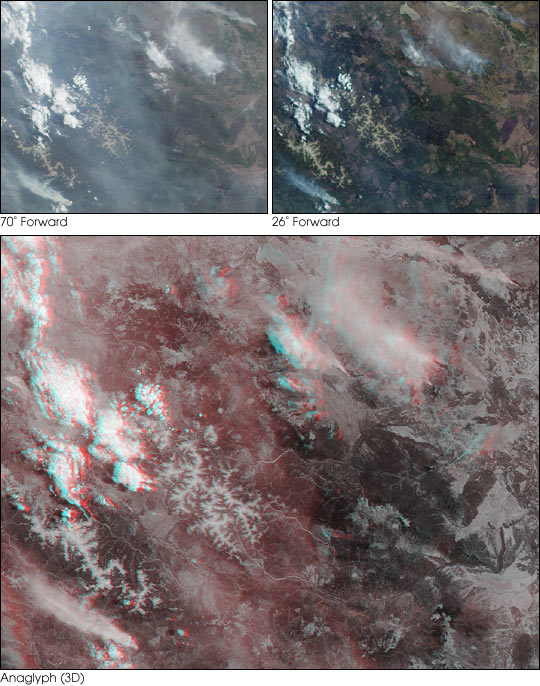 Several mountain ranges and a portion of the Amur River are visible in this set of MISR images of Russia's far east Khabarovsk region. The images were acquired on May 13, 2001. The view from MISR's 70-degree forward-looking camera is at the top left; the 26-degree forward-looking view is at the top right. The larger image at the bottom is a stereo "anaglyph" created using the cameras at two intermediate angles. To view the stereo image in 3-D you need red/blue glasses with the red filter placed over your left eye. All of the images are oriented with north to the left to facilitate stereo viewing. Each image covers an area about 345 kilometers x 278 kilometers.

The Amur River, in the upper right, and Lake Bolon, at the top center, are most prominent in the 26-degree view due to sunglint (mirror-like reflection of the Sun's rays by the water). The Amur River valley is a primary breeding ground for storks and cranes and a stopover for large numbers of migratory birds. About 20% of the Amur wetlands are protected by official conservation measures, but human development has converted large portions to agricultural uses. Other notable features in these images are several mountain chains, including the Badzhal'skiy to the left of center and the Bureiskiy in the lower left.

Smoke plumes from several forest fires can be seen. They are especially apparent in the 70-degree view where the smoke's visibility is accentuated, in part, by the long slant path through the atmosphere. The largest plumes are in the lower left and upper right, with some smaller plumes above and to the right of the image centers. In the upper images the hazy region in the vicinity of these smaller plumes has the appearance of low-altitude smoke, but depth perception provided by the stereo anaglyph shows that it is actually a distinct layer of high-altitude cirrus clouds. Whether the cirrus is related to the fires is uncertain. It is possible, however, for the fires to have heated the lower atmosphere enough to create bubbles of hot air. As such bubbles rise, they can force the stable air above, nearly saturated with water vapor, to move even higher. As the air rises it cools, possibly triggering the formation of ice clouds. Visualization of other three-dimensional characteristics of the scene, such as the intermediate-altitude layer of cumulus clouds along the left side, is made possible by the stereo imagery.